In the middle of the frozen taigas of Siberia, 1,000 miles inland from the Pacific Ocean and yet still 2,500 miles away from Moscow, sits the city of Mirny in the Sakha Republic in Russia.

Having up to 10 full months of winter, the city knows little in the way of seasons. There’s simply a couple of months a year when instead of massive, frozen snowbanks in -76º F, Mirny is filled with swampy streets and can reach record highs of 104º F.

Founded in 1955, the Soviet government settled and developed Mirny in a mere three and a half years, gaining official town status in 1959. The most recent census in 2010 boasted a population of just over 37,000 people but the city’s population has grown barely 25 percent since 1979 when it was recorded at 30,000 people. 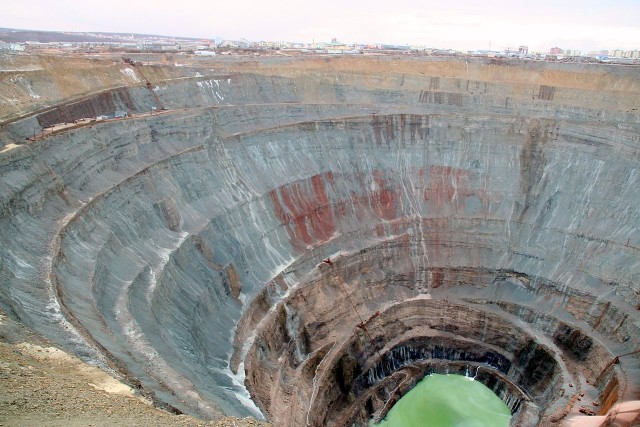 The open pit diamond mine of Mirny in Yakutia. Its depth is 525 meters. Photo by Vladimir CC BY SA 3.0

Aside from pretty harsh living conditions, the city of Mirny has seen such little growth since its founding for two main reasons.

The first is because Mirny is a monotown, a settlement whose existence is owed to one single company. In this case: Alrosa, Russia’s largest — if not one of the world’s largest — diamond mining company. 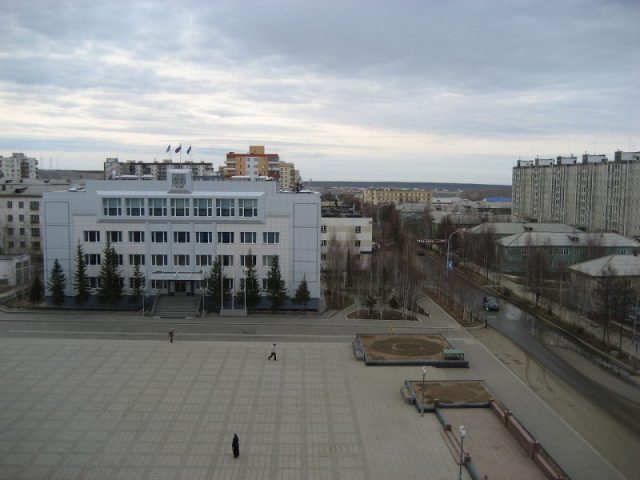 Central square in Mirny. Photo by alex.maksimov CC BY 3.0

At the height of development, Alrosa reaped more than 10 million carats (over 4,400 pounds) worth of diamonds per year, making it one of the richest mines in the world. In 2004 the mine stopped production as there were no more diamonds left to unearth, and in 2011 the mine closed permanently.

Second only to the Bingham Canyon Mine in Utah in size, Mirny boasts a diameter larger than 3/4 of a mile and a depth of 1,722 feet. The mine is a site to behold, especially from far away. 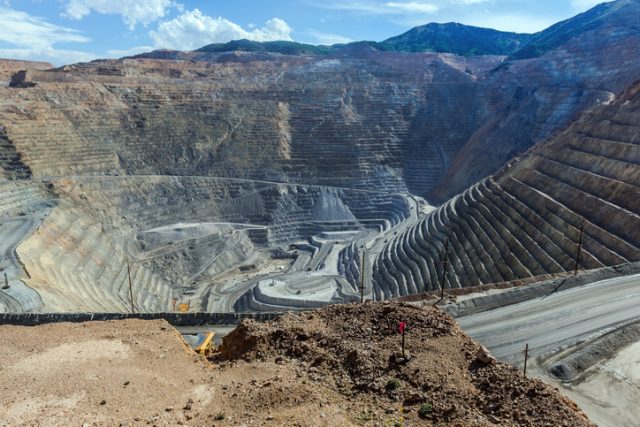 Kennecott Bingham Canyon Copper Mine in Utah, the deepest open-pit mine in the world, Western USA. 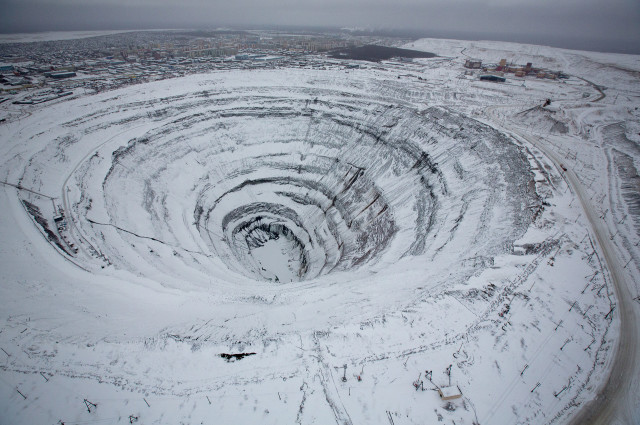 Mirny Mine during winter. Photo by Ptukhina Natasha CC BY SA 3.0

The second reason is because of its seclusion from the rest of the country, which is not just due to its location. In Russia there are several “closed cities” where Russian tourists, let alone foreign tourists, are not allowed access.

Though the cost of living is high, needing to import goods from across Siberia, Alrosa drew inhabitants to Mirny solely for the purpose of mining with incentives of higher wages. 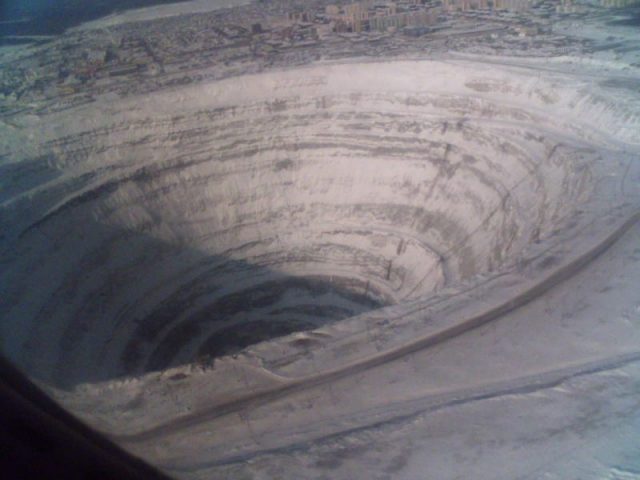 Mir from plane. Photo by Serj Kras CC BY SA 3.0

Some workers were seasonal, living in Mirny only three months at a time to earn extra money to bring back home. Some settled there with their whole family.

Women were employed in post-excavation positions and children could grow up to attend the Polytechnic Institute in Mirny which offers a bachelor’s degree in Petroleum Engineering and specialists’ degrees in Underground Mining of Mineral Deposits, Electrical Engineering and Automation in Mining, and Mining Machines and Equipment. 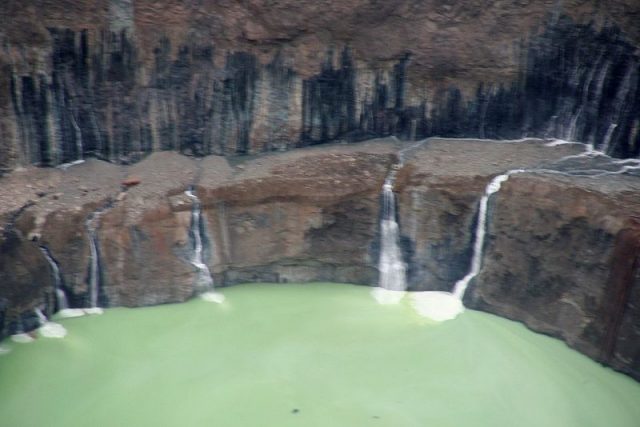 Lake in the Mir mine. Photo by Vladimir CC BY 3.0

Suffice to say the mining trade tends to stay in the family, continuing down the generations. Within reason, too, as an average teacher’s salary in Mirny adds up to the equivalent of $400 per month.

Despite the seeming singularity of this Siberian city, Mirny hopes to open its doors more in the future, working its way into the hospitality industry. The university now offers degrees in Philology, Mathematics, Computer Science, and Economics. Though the city now only has a couple of hotels, more and more guest rooms are cropping up on Airbnb. 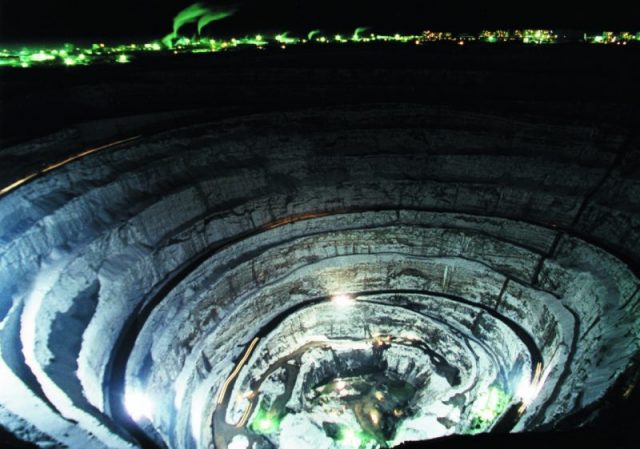 There are a handful of cafés and restaurants to choose from — including sushi and kebabs — not to mention the diamond museum, boasting some glittery specimens of the Mirny mine.

Read another story from us: For Centuries this Mysterious Rock Art has Guided Caravans Crossing the Andes

Miles and miles away from other settlements let alone cities, Mirny seems a strange place to choose to live. The name does, however, mean “peaceful,” “serene,” and “amicable” in Russian, so it must be pretty relaxing over there.