The Freakishly Giant ‘Armadillos’ who Lived Alongside Early Humans

If you are looking forward to the digital and DVD release of Fantastic Beasts: The Crimes of Grindenwald, besides digging your nose into a copy of a Harry Potter book in the meantime, you can also look back at some of the amazing life that roamed the Earth thousands or millions of years ago.

One such fantastic beast was the glyptodon, a huge mammal that resembles a modern-day armadillo — its size and weight aptly amplified. This creature carried a large shell on its back, while its animated and bony tail was powerful enough to smash bones to pieces.

Like a plethora of other wondrous creations of nature which coexisted side by side with humans, the glyptodon too went extinct. Though, the human factor might be only one part of the story of why this giant is no longer among us.

The first fossils of glyptodon were found during the 1830s in South America. While Darwin is credited with recording the first fossil evidence of one subfamily of the species, glyptodontines, the creature’s first mention in written account is ascribed to Uruguayan botanist and naturalist, Dámaso Antonio Larrañaga. 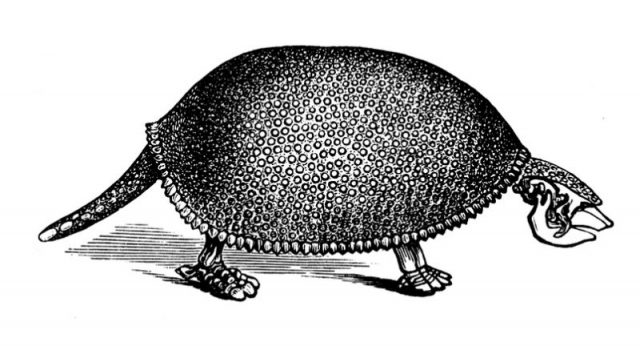 In a letter published in Georges Cuvier’s Recherches sur les ossemens fossiles de quadrupèdes in 1812, Larrañaga writes that he was lucky enough to stumble upon a femur, eight inches wide and which weighed an astonishing seven pounds. The remnants also included a portion of the tail.

When other fragments of the extinct animal emerged in the region between the Amazon and Argentina, scientists initially assumed all of them belonged to a huge ground sloth. But the presence of bony plates on the fossils dissuaded scientists the creature was a sloth. More efforts were required to determine what the mysterious creature was. 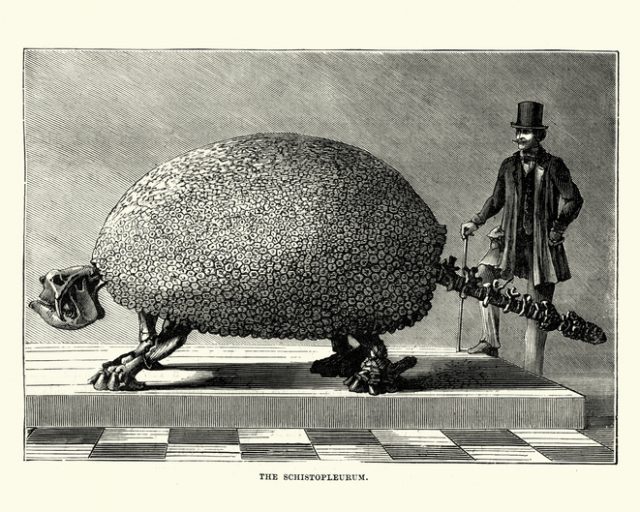 Vintage engraving of a Glyptodon, a genus of large, armored mammals of the subfamily Glyptodontinae that lived during the Pleistocene epoch.

The question was resolved by Richard Owen, an English palaeontologist and anatomist, described by The Telegraph as “the greatest scientist you’ve never heard of,” and who besides giving the names to vast numbers of newly discovered species at the time, was also a teacher for the children of Queen Victoria.

Similarly to the armadillo, the head and tail of glyptodon extend out of the shell, which alone reached up to five feet in length. The back of the creature was armored with countless tiny scutes (bony plates) that perfectly fit together. The pattern of the scutes varied from one individual to another. 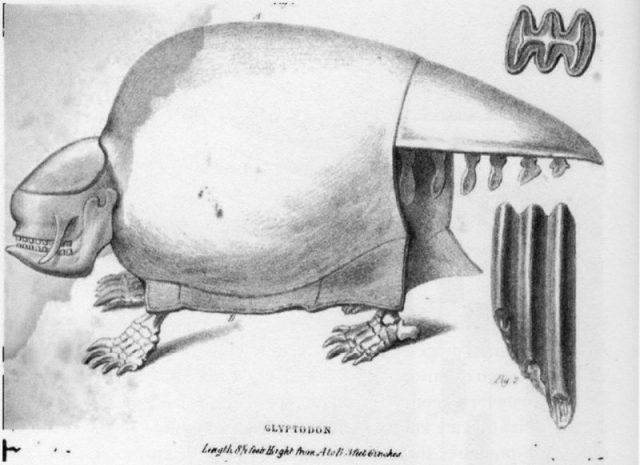 Richard Owen’s 1839 reconstruction of a Glyptodon skeleton; teeth at right.

All of these features made the glyptodon comparable also to turtles. However, unlike turtles, glyptodons were unable to pull back their head inside the body. Their head was still very agile and a bony cap on top of the skull additionally reinforced the creature’s defense.

Glyptodon specimens normally grew up to 10 feet in length and could weigh 2,000 pounds — roughly equivalent to the size of a small car, the likes of a Volkswagen Beetle.

Its tail was indeed its deadliest feature. Armed with more bony growth, with it, an angry glyptodon mother would easily deter an enemy trying to attack her little ones.

Further research has revealed that glyptodons roamed around South America from roughly 5.3 million years to about 10,000 years ago, enough for some of the species to migrate to North America as well. In geological epochs, this time frame matches the Pliocene and the Pleistocene. 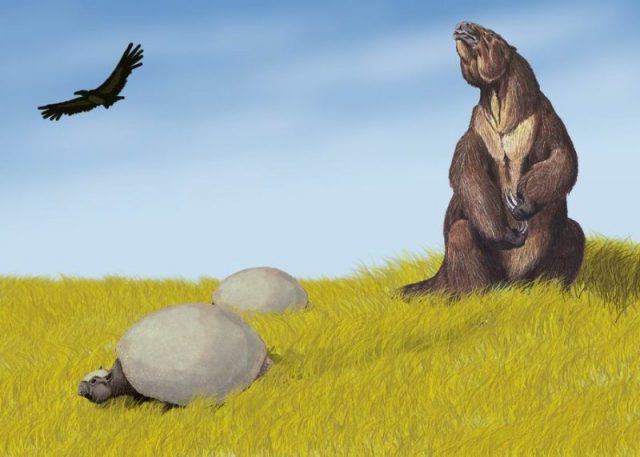 Pleistocene of South America: Restoration of Glyptodon in South American environment, alongside Megatherium and Argentavis. Photo by DiBgd CC BY-SA 3.0

Somewhere at the end of their existence, glyptodons lived alongside early humans. Or at least tried to. As herbivores, they posed little danger to humans. Given their weight they were also slow to move. As more evidence suggests, the glyptodon often fell prey to our distant relatives.

In glyptodons, early humans saw an abundant source of both food and shelter. Although the creature had stunning defensive capabilities, it had one startling point of weakness — its underbelly. This was the most exposed part of its body and easily prone to receive wounds from spears or other sharp antique weaponry. 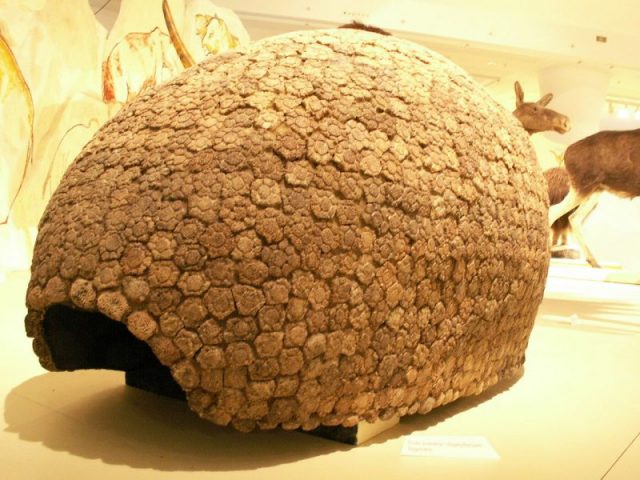 Lionhearted early humans would confront these giants of nature, outwitting them to expose their belly and then attack. While the animal gave meat, its huge shell was used for shelter. Perhaps for protecting from any kind of malevolent weather or as a refuge from predators.

Sadly, hunting is believed to have led to the decline of glyptodon populations. Some scholars also speculate that climate circumstances may have also played part in the species’ decline. 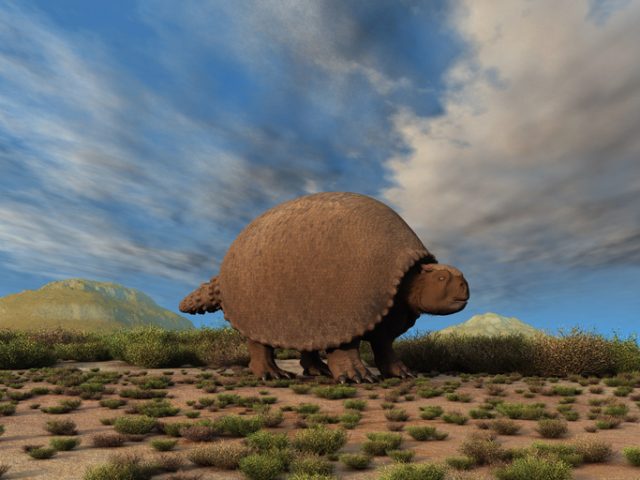 Although, intriguingly enough, even in harsh weather conditions when it was hard to find any food, the glyptodon would have coped with little sustenance. Something that other megafauna at the time would hardly cope with.

The last of the species would have roamed the Americas shortly after the last Ice Age. About 10,000 years ago the creature went extinct and all we have now left is fossils.

Read another story from us: Earliest Brewery in Britain Discovered – And it’s Very, Very Old

Perhaps one day long after we are gone, and when new creatures evolve on Earth, the glyptodon will return, either in a form resembling a huge turtle or a huge armadillo — its distant miniature relative we see in nature today.