The 8 Most Inventive Ways People Escaped the Berlin Wall

The Berlin Wall was such a symbol of oppression that many people forget that there was no wall between West and East Germany between the end of the second world war in 1945 and the building of the wall in 1961.

By the end of the war, nearly every major city in Germany was almost completely flattened. Life was so miserable everywhere in the country that in many ways, it didn’t really matter where you lived, west or east.

But as the post-war world entered into the Cold War and the Soviet Union began to set up its oppressive puppet governments — not only in Eastern Germany but also in Eastern Europe — life in the West, which had begun to thrive by the late 1950s looked more and more attractive to Easterners. By 1961, East Germany was experiencing mass emigration. That summer, close to 2,500 people a day decided to leave the country. A joke went: “Would the last one to leave please turn out the lights?” 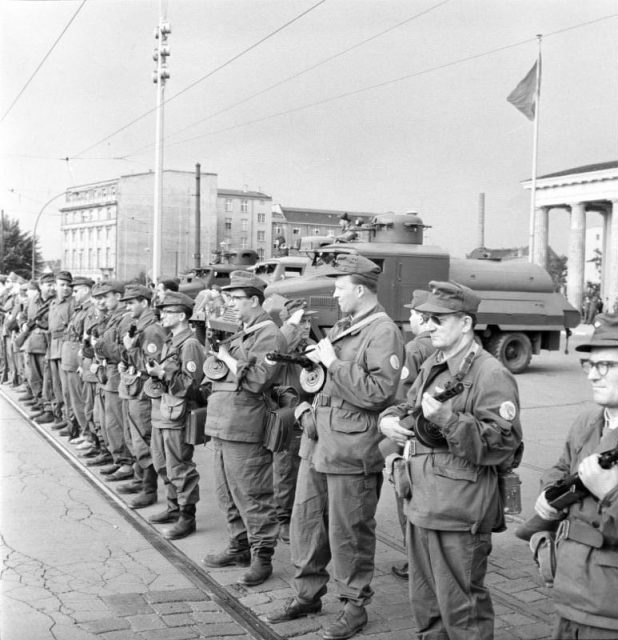 In response, the increasingly hard-line East German government, with pressure from the Soviet Union, began to erect the wall on August 13, 1961. The Berlin Wall didn’t just divide Berlin, it surrounded it, and ran in one form or another down the border between the Germanies from north to south, encompassing hundreds of miles.

For the first few days, people in buildings along the wall jumped over it, sometimes breaking legs, arms, etc. After a few days of this, the authorities bricked up the windows of the buildings, evicted the tenants and in many cases, simply demolished them. 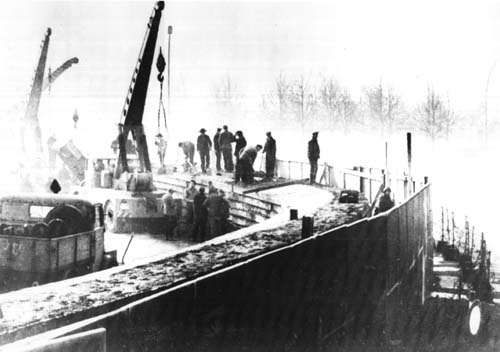 Eventually, the “inter-German barrier” as it was sometimes referred to in the East, included minefields, trip-wired booby traps, police dogs, army and police patrols, machine guns, tear gas, and perhaps thousands of miles of barbed wire.

The Spree River in Berlin was a natural barrier, but people attempted to cross it in all weathers. Steel mesh and police boats awaited them in the water. In the 28 years that the Wall divided Germany, nearly 150 people lost their lives trying to escape to freedom. Some put the death toll far higher. The East German authorities were literally told to shoot first and ask questions later. 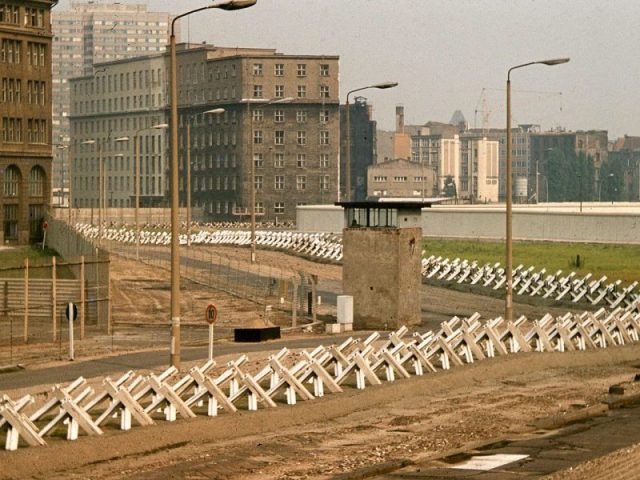 This section of the Berlin Wall’s “death strip” featured Czech hedgehogs, a guard tower and a cleared area, 1977. Photo by GeorgeLouis CC BY SA 3.0

Here are eight of the more inventive ways that people employed to escape to freedom in the West: 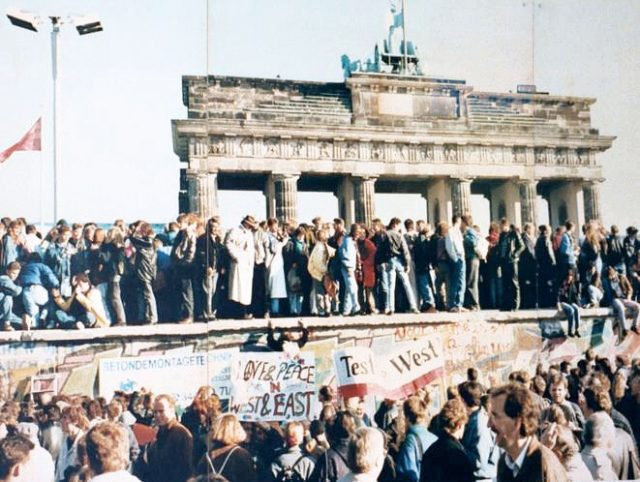 The fall of the Berlin Wall, 1989. East and West Germans stand on top of the wall at the Brandenburg Gate in the days before it was torn down. Photo by Lear 21 CC BY SA 3.0

Horst Klein was a circus acrobat who devised a simple yet brilliant way to make the crossing from East to West Berlin. In 1963 Klein attempted — and succeeded pulling off — a career-defining feat: he used an old high-tension wire that ran right over the heads of the border guards. He climbed 60 feet up a disused electricity tower some distance from the wall to make his sloth-like aerial stunt, legs wrapped around the wire and pulling himself along with his arms. 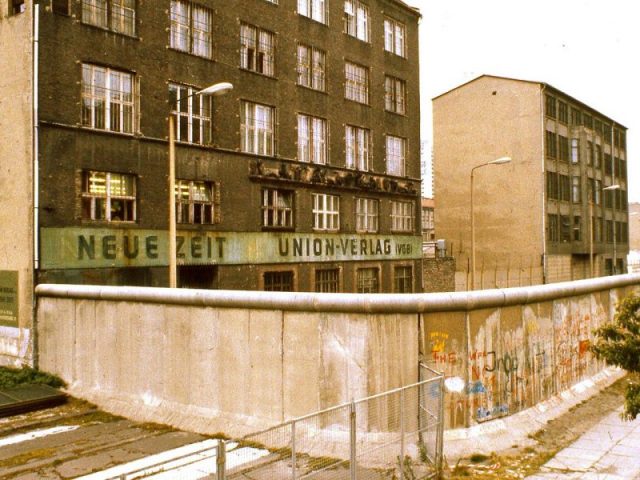 1984 – the top of the Berlin Wall was lined with a smooth pipe, intended to make it more difficult to scale. The areas just outside the wall, including the sidewalk, are de jure Eastern Bloc territory. Photo by GeorgeLouis CC BY-SA 3.0

When he got tired he reversed position, placing his body on top and continuing to shimmy his way over the border, directly over the head of the dreaded People’s Police (the “Volkspolizei” or “Vopos” in German). Horst’s dismount was far from a perfect 10. He fell off the cable and suffered some minor injuries, but he landed in West Germany. 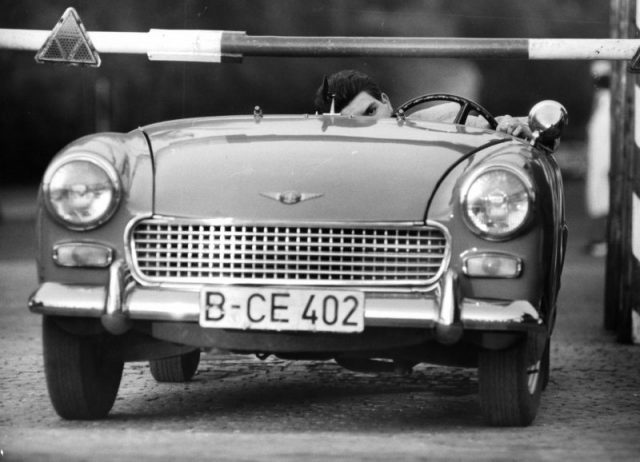 This is how Heinz Meixner drove his Sprite car, with the windscreen cut so that it would be low enough to run under frontier posts in Berlin, Germany, circa 1961. Photo by Express/Archive Photos/Getty Images

Austrian lathe operator Heinz Meixner wanted to get his elderly mother out of East Berlin. Visiting legally, he was driving a car not often seen in the East Germany of 1963: an Austin-Healey Sprite Convertible.

The car was bound to attract attention from the East German guards, but apparently they missed the fact that Meixner had totally removed the windshield upon arriving at his mother’s house. 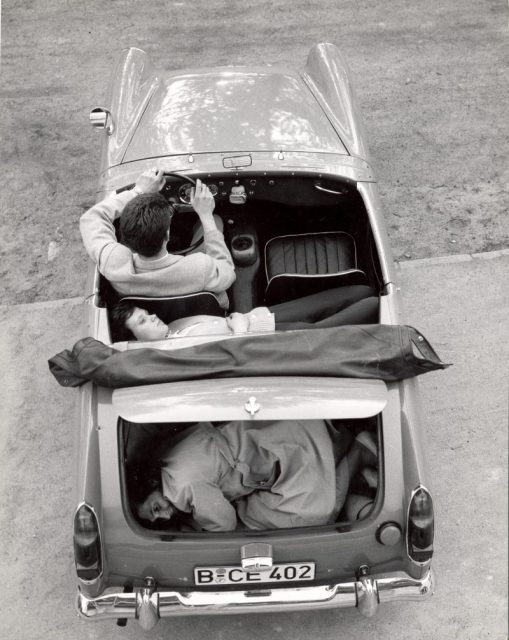 Heinz Meixner with his fiancee and her mother Frau Thurau, showing how they arranged themselves in his Austin-Healey Sprite to drive through the Berlin Wall, Germany, circa 1965. Photo by Express Newspapers/Getty Images

Leaving East Germany, Meixner was directed to stop at the border but he floored it instead, ducking as the low sports car sailed under the three-foot-high metal barrier meant to stop vehicles from passing through. Before the guards could react, Heinz was over the border — and so was his mom, who was safely stowed away in the trunk. 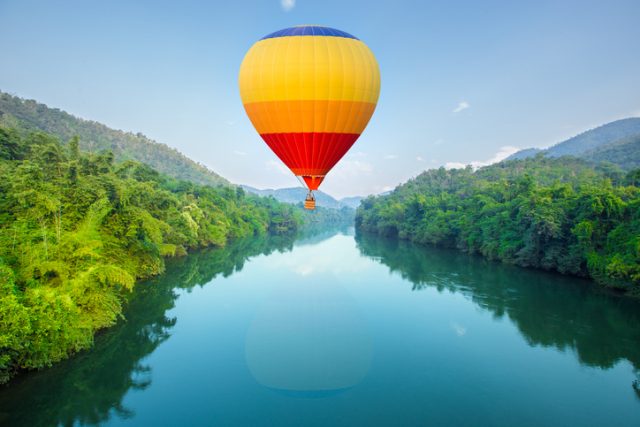 On September 16, 1979, media outlets in the West treated viewers to a special morale boosting story on the evening news. Two daring couples and their kids had flown over the Berlin Wall in a home-made hot-air balloon.

By 1979, tunneling under, or attempting to flee at speed over the wall at border crossings was a particularly suicidal act. Escape attempts had decreased and those that succeeded were either lucky, creative or both.

Gunther Wetzel and Hans Strelczyk were good with their hands; Wetzel was a mason and Strelczyk a mechanic. Gathering old propane cylinders, they created an engine for the balloon that their wives had patched together from old canvas and bed sheets. It didn’t have to look good, it just had to stay airborne long and high enough for the families to get over the border. Amazingly, the make-shift balloon climbed to 8,000 feet and got both families over the border.

The soldier who couldn’t do his duty any longer 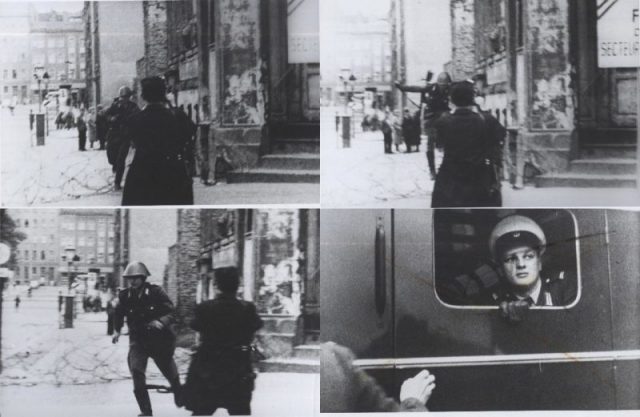 One of the most iconic pictures related to the Berlin Wall is that of East German border guard Conrad Schumann leaping over a pile of bricks and barbed wire as the partition was being constructed. As he leaped to freedom in his uniform, he threw his Soviet-made machine gun to the ground. 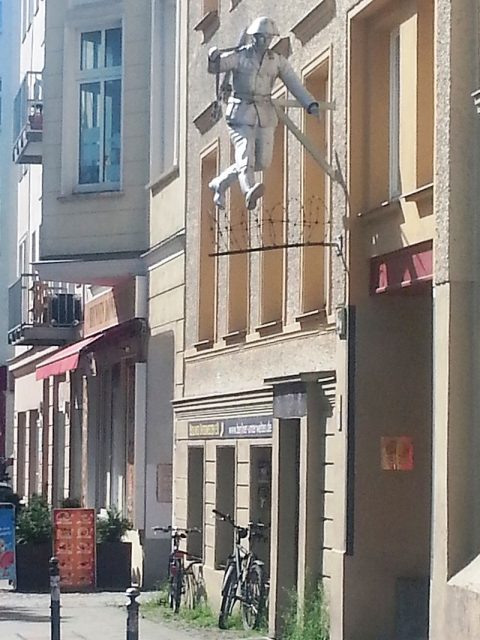 Sadly, Schumann committed suicide in 1998. Prone to depression anyway, he felt more at home in the West than in the East, but he was separated from his family like so many others, and even after the wall fell in 1989, there was a rift between them. A statue, entitled “Mauerspringer” (Wall jumper) honors Schumann in Berlin. 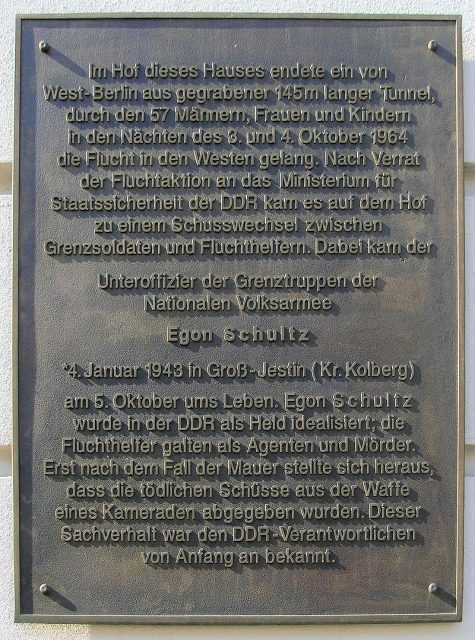 Commemorative plaque on the house at Strelitzer Strasse 55, in Berlin Mitte Photo by OTFW CC BY-SA 3.0

For some time after the construction of the Berlin Wall, tunneling was the preferred and “safest” method of escape. Eventually, sound detectors were installed all along the border, and secret police monitored hardware stores, tool foundries and construction sites for odd purchases and to inspect inventories to see if digging tools were being bought at high levels or had gone missing.

Most of those leaving the East were young. The elderly, for the most part, had their lives in the East, and had lived through WWI, WWII and the Communists. But a group of around a dozen elderly men and women, led by an 81-year-old man, escaped through a tunnel dug high enough that they could “walk to freedom with our wives, comfortably and unbowed.” 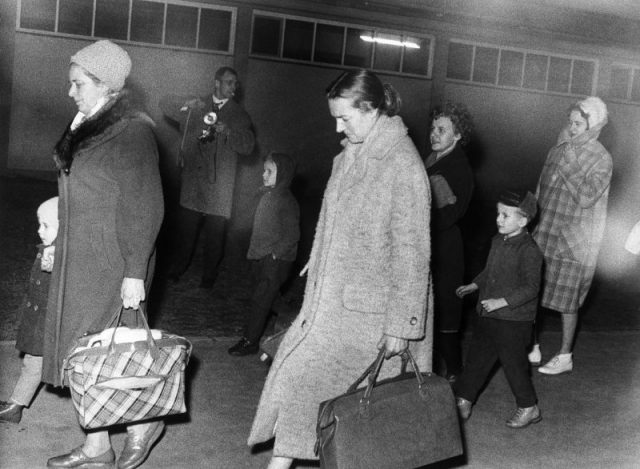 Escape from East Berlin after the construction of the Berlin Wall: train with which the engine driver Harry Deterling, the fireman and 25 relatives of them escaped to West Berlin (Spandau) (the train rode from Oranienburg to Spandau without stopping) – the refugees on their arrival in Berlin-Spandau (Photo by Schöne/ullstein bild via Getty Images)

Just months after the wall went up, train driver Harry Deterling made a break for it – with his train. The Berlin Underground ran through the city, but border checkpoints were in place and were heavy. Trains were to stop and documents checked.

Some trains did travel between West and East, but others stopped before the border. Not Harry’s. He gunned the engine and smashed through the fortifications to freedom. Some of his family were aboard, and 16 other strangers elected to stay in the West. Seven returned to the GDR. 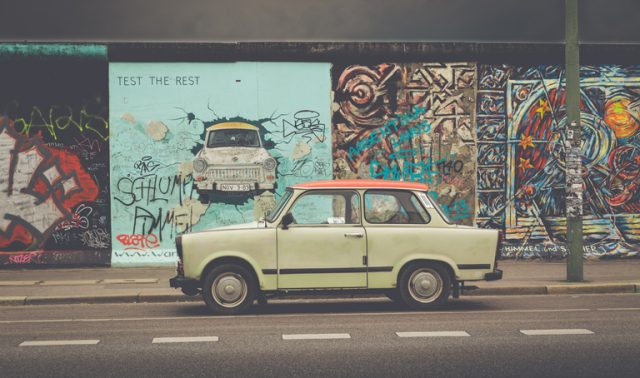 In a 1986 article in the Los Angeles Times, reporter Gordon Rowley wrote not only about Meixner’s car escape but also another ploy.

Apparently, word got around via the underground that the membership cards of the Munich Playboy club resembled diplomatic passports – which virtually guarantee immunity.

Read another story from us: The Macabre Reason why 1950s Children Wore Strange Dog Tags

Rather than risk an international incident, a few guards let Playboy card flashing East Germans over the border without a second thought.