Off the Chinese mainland and some 40 miles east of Shanghai, is laid the little island of Shengshan. Shengshan is only a few miles across and all dotted with hills. The reason why it’s special is one of its fishing villages–Houtouwan, at present no longer a fishing village. Abandoned by the early 1990s, over the last three decades it was nature that reclaimed Houtouwan.

Once abundant with life, today the vacant properties of Houtouwan are almost entirely camouflaged under layers of thick greenery. In fact, Houtouwan might just be the world’s greenest village. Almost every edifice in it is capped with vegetation.

After the village was rediscovered in 2015, it quickly became a famous destination for tourists and travelers. The former dwellings descend down the hills all the way to the coast. Some of them appear ruined, having either a wall or a roof torn down by time. Their new fittings are indeed coatings of green, including ivy, vines, and ferns. 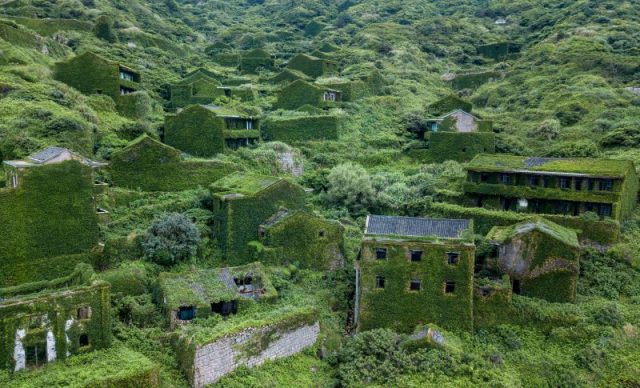 While the jilted fishing dock is a nod that the village had once wheeled its own economy, some of the forgotten homes even contain furniture left to decay, further adding to the overall eerie feeling of the place. It was during the 1950s when Houtouwan began to develop. Its home island is one of 400 islands consisting of the Shengsi archipelago in the area. Of all the settlements on the archipelago, just Houtouwan has been so majestically transformed with the help of Mother Nature.

Houtouwan’s families who have heavily relied on fishing lived well in the succeeding decades on the island. At its heyday, in between 2,000 and 3,000 people resided there. However, with China’s rapid development the village lagged behind. Its small harbor was out-competed by other, larger fishing communes. Ships became too big to dock at Houtouwan’s port. This posed not only an economic issue but affected access to basic services such as health care and education. 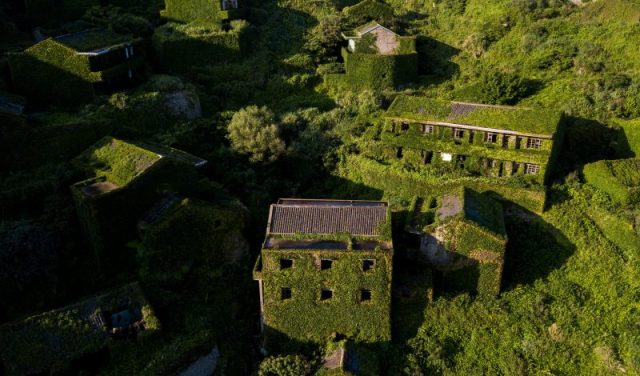 In those instances when the seas were not safe for passage, residents were left with only a small meandering path snaking up the hills to make their way out of the village. Since life had become difficult all around, families moved to other close-by villages or to the mainland in their quest for better jobs and a place to live, and by the early 1990s, there was no one left around.

Shanghai-based amateur photographer Qing Jian first traveled to Shengshan island in 2015 where she took a series of stunning photos. The neglected seaside village quickly caught the attention of others afterward. “The neighboring villages all have people living in them – only Houtouwan is completely empty,” Jian told the MailOnline in 2018. These days, more and more island-goers come to see the village and awe at the touch nature has given to it. 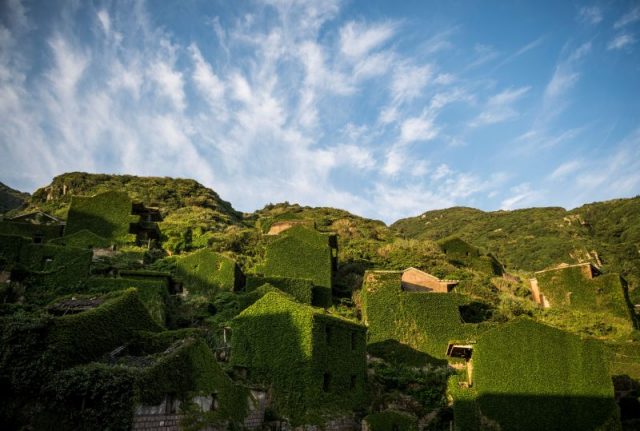 The elevated terrains and paths overgrown with vegetation pose a small cardio challenge for those who decide to drop by. But t’s worth the adventure. The single available item to purchase at the village is a bottle of water. The vendors are people who have lived in the village before. Other former villagers have also returned within the last couple of years, in order to earn some income as tour guides when visitors come. Only a few of them also live there now. If you are not one of them note that there is a small entry fee to pay upon arrival. 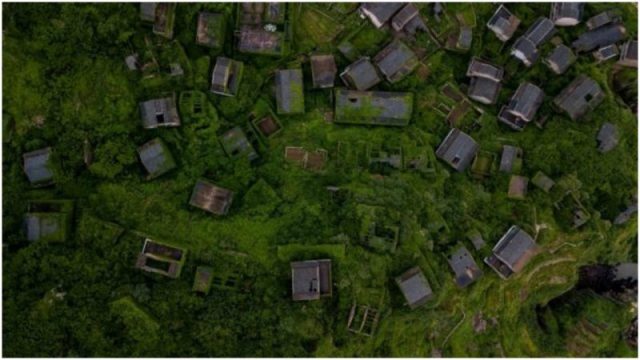 Beyond Houtouwan, a great many Chinese villages have vanished due to the country’s economic boom of the last decades. Some villages, which did not even have a single traffic light at the time have now grown into huge metropolises, but thousands of other villages were just deserted as people migrated to live in cities.

Read another story from us: Brave Tourists Visit Chernobyl Mainly to See this Enormous Abandoned Radar

Houtouwan remains an exception. Despite its abandonment, it has transformed into something really beautiful and by modern standards also exceptionally photo-worthy.