Ever see a $100,000 bill? The Story Behind Large-Denomination Currency

Almost everyone has heard the quote, “Money is the root of all evil.” Will Rogers said, “Too many people spend money they earned … to buy things they don’t want … to impress people that they don’t like.” No matter what your opinion is about money, it is necessary for living in today’s world.

Wars have been fought, people killed, families divided, and friends have been separated over money. Sometimes people that have it think money makes them a better person than one who has worked hard his entire life just to get by. Greed for money is at epidemic proportions.

Originally people in the early colonies used the British pound, but just as many used barter. Deer skins were often used as money as well as other animal skins. Using deer skins led to the phrase “a couple of bucks.” Soon the newly created United States began printing money.

The first US paper money was a two dollar note issued in 1776. In 1861, during the Civil War, the U.S. Department of Treasury issued green colored Demand Notes nicknamed “greenbacks”. In 1862, United States notes issued with serial numbers and a Treasury Department seal came about.

With engraved pictures and other decoration, they set the stage for the currency design we use today. During the Civil War, the Confederacy issued their own money which quickly became worthless at the end of the war. 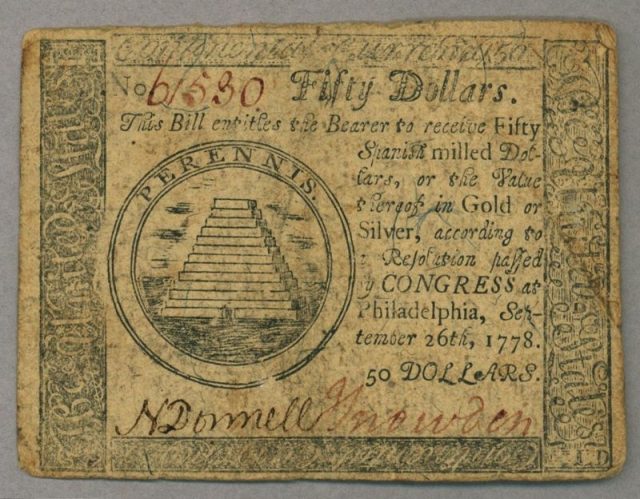 This $50 Continental Currency note (from 1778) was designed by Francis Hopkinson. The unfinished pyramid design was a precursor to the reverse side of the Great Seal of the United States.

Some of it still remains, and, as the years go by, the existing notes get more and more valuable, especially if the pictures include important Confederates or slaves and cotton. An 1864 Confederate note with a picture of General Stonewall Jackson with a face value of $500 can be had for between $200 to thousands, depending on its condition.

According to U.S. Currency Education Program, all U.S. currency issued since 1861 is still redeemable for face value, although one could probably get more money from selling it as a collectible. 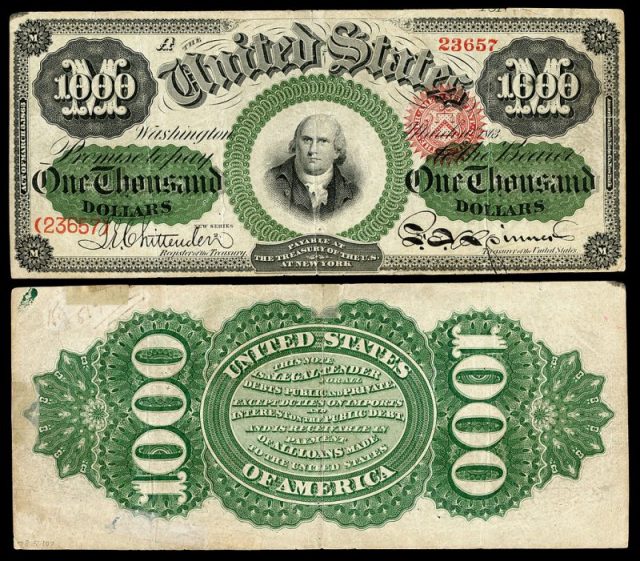 A $1,000 Legal Tender Note from the Series 1862-1863 greenback issue. Engraved signatures of Chittenden (Register of the Treasury) and Spinner (Treasurer of the United States).

After the war, the Bureau of Engraving and Printing was established to centralize the issuance of money. In 1889, Congress legislated names below the portraits that are found on all money. The cost of issuing bank notes kept rising, so by 1929 the notes were made about 30 percent smaller and the designs were standardized to make it easier to find counterfeits.

At that time, extremely large banknotes were issued in denominations of $10,000 with a portrait of Salmon P. Chase, Secretary of the Treasury during Abraham Lincoln’s presidency, a $500 bill featuring President Grover Cleveland, a $5,000 note with President James Madison, and the highest value ever created for U.S. currency – a series 1934 $100,000 gold certificate with President Woodrow Wilson on the front. 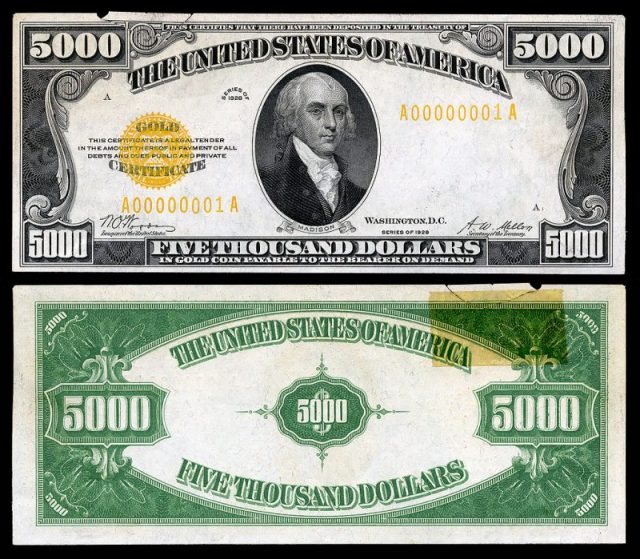 $5,000 Gold Certificate, Series 1928, (Serial #1) depicting James Madison, with signatures of Woods (Treasurer of the United States), and Mellon (Secretary of the Treasury)

Most of these high-value bills were used only for transactions between banks and the government. There were very few of these issued, and, in 1969, the Treasury stopped making them. Although the government will still accept them as a form of legal tender, they are being sold for as much as $140,000 by collectors. If a larger denomination bill is still in circulation, it is pulled and destroyed by the Treasury. 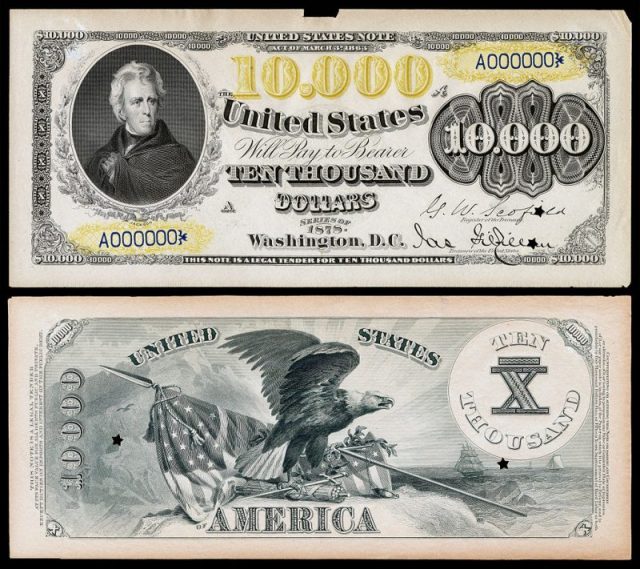 Before 1965, all dimes and quarters were made from silver, but President Lyndon Johnson called for the coins to be made with 40 percent less silver creating the “sandwich” coins of today which show the addition of another base metal. By 1968, money could no longer be traded in for any precious metal. In 1996, U.S. currency was re-designed with larger portraits and more security features. 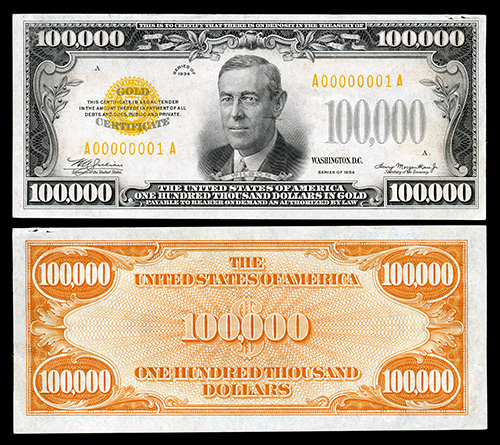 $100,000 Gold Certificate, Series 1934, (Serial #1) depicting Woodrow Wilson, with signatures of Julian (Treasurer of the United States), and Morgenthau (Secretary of the Treasury).

Both coins were large and heavy and were not popular with the public. The Susan B. Anthony $1 coin, issued in 1979, was not well received because it was often mistaken for a quarter. The Sacagawea golden dollar, while still in circulation, is also not very popular with some who remark that it looks like play money.

Read another story from us: Extremely Rare Penny Found in Boy’s Lunch Money Now Worth a Fortune

U.S. currency will continue to change as counterfeiters are able to reproduce better and better fake bills. Whatever your preference, paper money or coins, money is, and will probably always be, necessary in today’s world.