The Story Behind the Painting -Washington Crossing the Delaware

In the Metropolitan Museum of Art in New York City, the painting Washington Crossing the Delaware hangs in Gallery 760. It is a well-known oil on canvas painting of George Washington’s crossing of the Delaware River on Christmas night in 1776 to attack Hessians in Trenton, New Jersey during the American Revolution. Not only does it depict the future first President of America, but it also features the future fifth President, James Monroe.

One of the most famous paintings of the American Revolution, it was painted in Düsseldorf in 1851 by Emanuel Gottlieb Leutze, a German who grew up in the United States but returned to Germany as an adult. Born 40 years after the Battle of Trenton, Leutze had hoped that the spirit of Revolution would motivate the European liberal Revolutionaries in 1848. He did get a few things wrong, though. 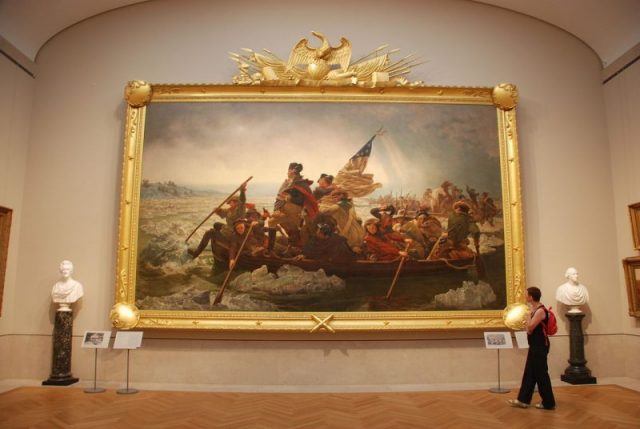 Washington Crossing the Delaware by Emanuel Leutze, at the Metropolitan Museum of Art, New York, NY. Photo by Adavyd CC BY SA 3.0

On Purdue Today, David Parrish, a professor of art history, says the flag being held by Monroe did not exist until about a year after the battle. The boat in the painting was an incorrect type, and Washington should have been painted as a younger man. Also, while he looks especially noble, Washington knew enough not to stand up in a rowboat. We’ll just leave that one to poetic license.

Many historians don’t believe Monroe crossed Delaware with Washington, but he certainly fought at Trenton and gained a bullet in his shoulder that remained for the rest of his life.

The other occupants of the boat represent the different walks of life of the American colonists including French Canadian fur trappers, an African, a Scot, farmers, and a figure from the western part of the country. Some believe the figure in the red coat and black scarf may represent the women that fought and died for freedom.

The website of the Metropolitan Museum of Art tells us that Leutze began the painting in 1849 but it was damaged by a fire in 1850. The artist repaired the damage and the painting was acquired by Bremen Kunsthalle, an art museum in Bremen, Germany. That painting was destroyed in 1942 during a World War II bombing raid by British forces. 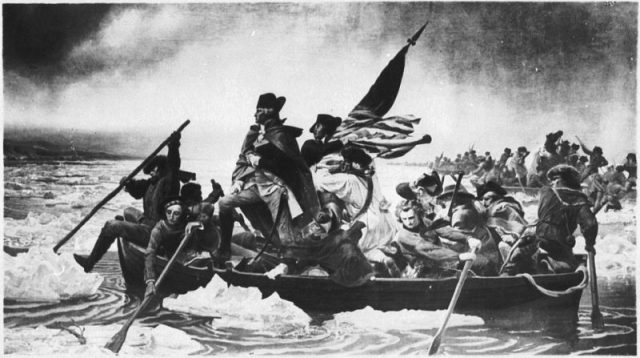 Fortunately, Leutze had created a copy of the painting shortly after the first, and David Parrish reports that painting was shipped to New York City in the autumn of 1851, where thousands flocked to its display in a New York gallery and at the U.S. Capitol Rotunda in Washington DC. The painting is now on permanent display at the Metropolitan Museum of Art in New York City.

Other authorized copies are displayed at Perdue University, at Washington Crossing Historic Park, and in the White House. The Delaware crossing was also captured in other paintings by artists including George Caleb Bingham, an American frontier artist who worked in the mid-1800s and was a friend of Leutze; Thomas Sully, an American artist born in England who worked in the early 1800s, and Currier and Ives, who made a lithograph of the scene painted by Leutze. Leutze’s painting is also depicted on the New Jersey state quarter. 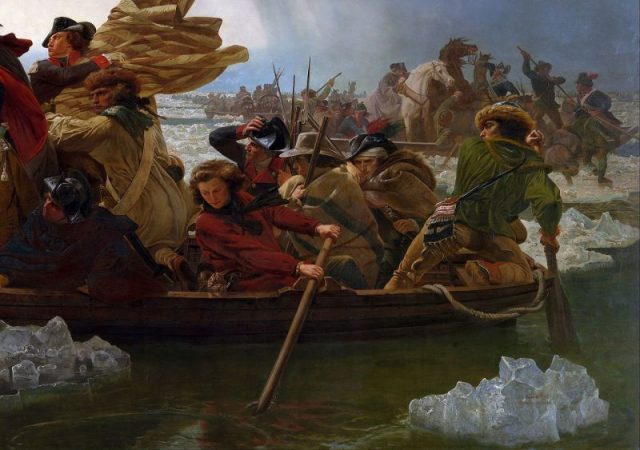 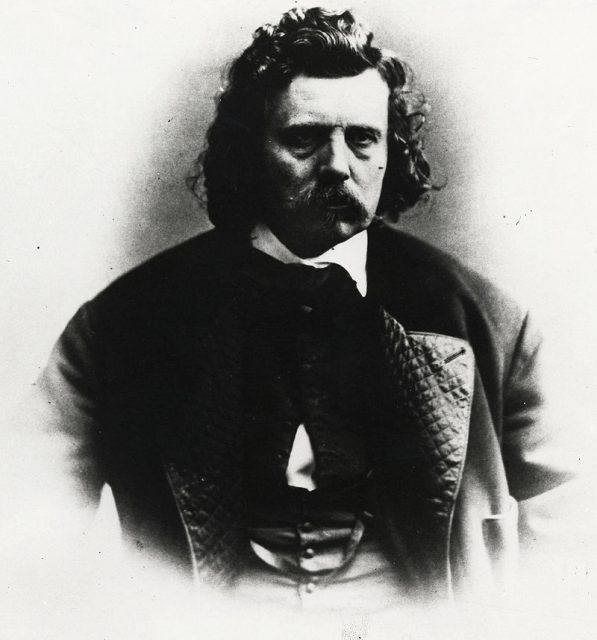 Parodies aside, Washington Crossing the Delaware is an awe-inspiring painting viewed by thousands each year. The painting was also recreated for a limestone statue on the spot where Washington landed in New Jersey, the 500 acre Washington Crossing Historic Park. Frank Arena, a retired limestone worker, carved the statue, and workers set each individually carved figure into the boat.

Read another story from us: The Peculiar Frenchman who Designed Washington D.C.

According to Washington Crossing Historic Park, one worker also placed a small American flag, a New Jersey State quarter, and a note listing the names of the workers who helped put the statue together under one of the figures.