The idea that some noble girls and women were subjected to wearing chastity belts during the Middle Ages to protect their virtue has permeated everything from Hollywood movies to urban legends, usually with some kind of comic effect in mind. But what exactly was a chastity belt, and is the idea even a valid one?

Chastity belts were, to put it simply, a severe method of fidelity enforcement. By wearing the belt, a woman would have been prevented from having intercourse – apparently a worry when knightly husbands left to fight in battles, or go on pilgrimage or crusade. However, mention of the belts are all but missing from the vast majority of medieval texts.

A German print by Heinrich Winrich dating from the late 1500s shows this scenario but in a fictionalized way. A woman sits on the bed wearing nothing but her chastity belt. 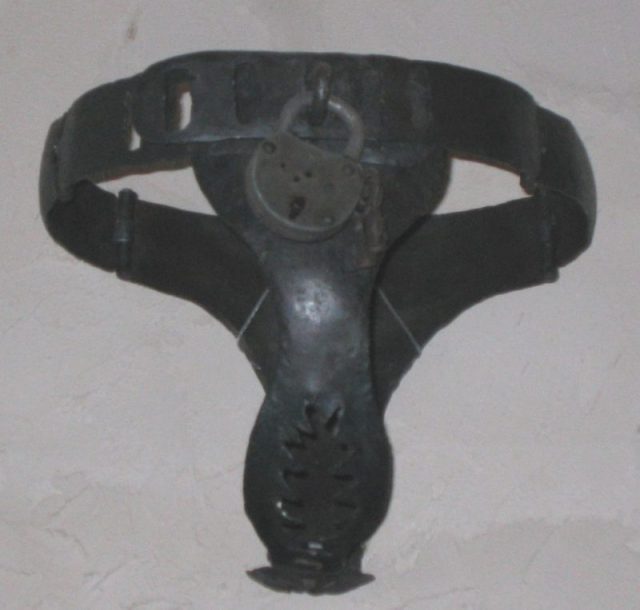 In the engraving, she is seen to be handing a key over to her husband, whose hat sports donkey ears, symbolizing that he is a fool. Meanwhile, another man lurks in a darkened corner, and he is holding a second key.

There is also mention of chastity belts in a treatise on siege machines called Bellafortis, written by another German, Konrad Kyeser, in 1405. The document contains detailed designs for amour, catapults, tools of war, and torture devices.

The belt only appears in the afterward to the treatise and is believed to be a joke and an instrument of satire. Proof that the book isn’t entirely serious: Keyser also includes a few fart jokes.

Albrecht Classen is an expert in this subject area and in 2007 wrote The Medieval Chastity Belt: a Myth-Making Process. According to Classen, “no author of sermon literature, or penitentiary texts, or didactic and legal writers has even mentioned the chastity belt probably because already the basic idea behind it defies the basic needs of the human (female) body.” 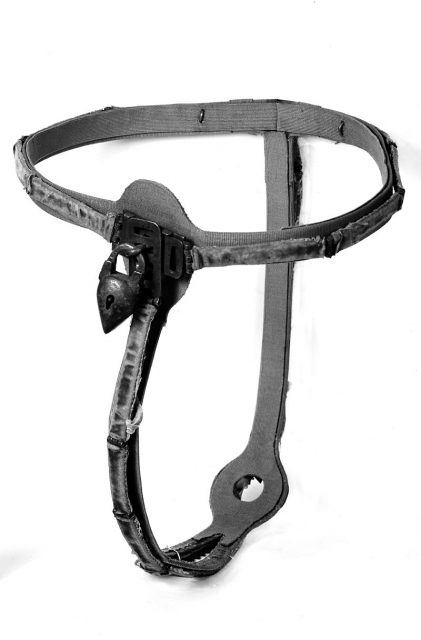 So what could justify the pervasiveness of the idea of chastity belts at all? Classen believes it is accountable to male fear. In engravings and drawings, there is always a lover who has a second key hiding in the background. No one took the idea seriously.

Depictions of women in chastity belts are always done tongue-in-cheek: “You have a bunch of literary representation, but very few historical references to a man trying to put a chastity belt on his wife.” Therefore, any reference to the belts in literature is either satirical or allegorical.

But how does this account for actual medieval artifacts that have come to light? What about items like the collection of chastity belts that can be found in museums such as those like the Criminal Museum in Rothenburg ob der Tauber, in Germany? According to Classen, these items do not actually come from the Middle Ages but were constructed later.

Chastity belt, decorated with a heart and crossed arrows. Lined with silk. Photo by Wellcome Image CC BY 4.0

For example, the British Museum has a “fake” chastity belt. According to the information that accompanies the artifact, “it is probable that the great majority of examples now existing were made in the eighteenth and nineteenth centuries as curiosities for the prurient, or as jokes for the tasteless.”

Likewise, Lesley Smith, a historian and curator at Tutbury Castle in the UK, has written, “I have traveled abroad and looked at art collections and, as yet, haven’t seen a chastity belt that can be proved to be medieval in origin.” 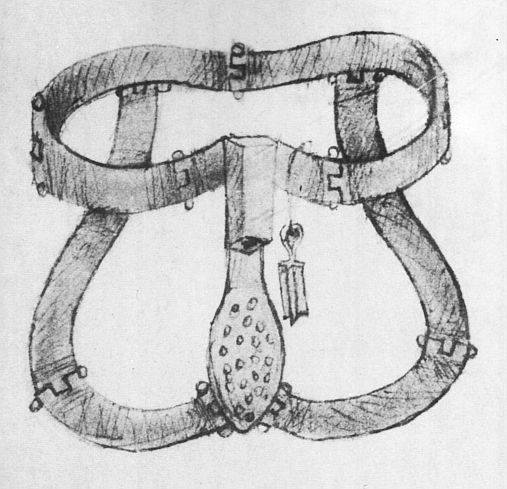 However, that the myth of the chastity belt would be believed is not unusual for the Middle Ages. Again according to Smith, “In medieval Europe, any sexual activity that did not lead to conception was supposed to be forbidden.” Certainly, the very idea (if it existed) of having to wear a chastity belt would have been a deterrent to the minds of girls and women.

Besides the lack of historical evidence to prove their existence, the very idea of chastity belts has no place in logic either. Their metallic or rough surfaces would have caused permanent, deep wounds to the groin area within a few days, according to experts at the Semmelweis Museum in Budapest, which put on an exhibition on the history of chastity belts in 2010. 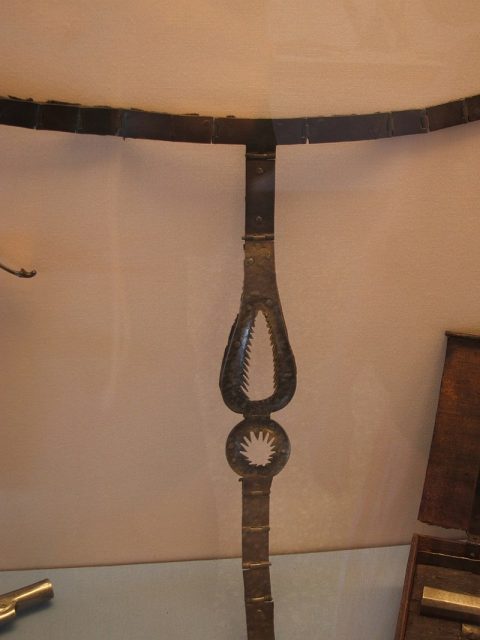 Venetian chastity belt on display in the Doge’s palace. (Claimed to be 16th–17th century.) Photo by Stevenj CC BY-SA 3.0

One example that appears in Classen’s book has a tiny heart on the front and a small hole at the back in the shape of a trefoil through which the wearer could apparently defecate.

Read another story from us: These 10 British Laws are Almost Too Weird (and Detailed) to be True

Interestingly, the male chastity market offers more options than female versions, and worldwide demand for the male versions is higher than that for women.