Deep within China’s Hunan province is an other-worldly scene of unique quartzite-sandstone pinnacles, seemingly frozen in time. Rising steadfastly from the subtropical temperate forest floor beneath, these towering monoliths are the result of thousands of years of erosion.

Today, these towers form part of the Zhāngjiājiè National Forest Park which sees some 30 million visitors each year. The captivating sight is said to have been an inspiration for the 2009 James Cameron film Avatar. 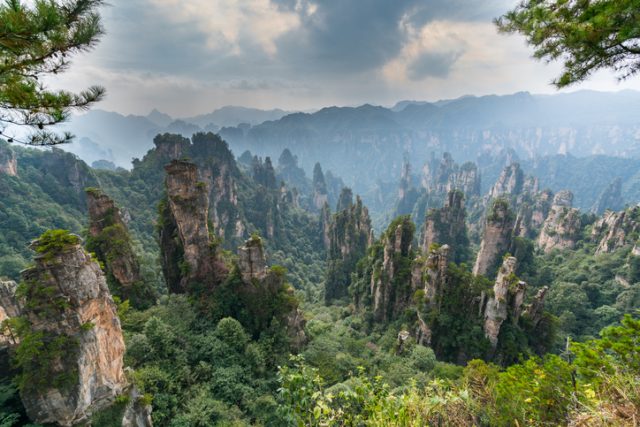 The lush, natural setting, which saw a spike in tourist interest soon after the movie’s release, is now often dubbed the Avatar Mountains — thanks in part to clever marketing by the local government, who officially renamed the peak previously called Southern Sky Column as “Avatar Hallelujah Mountain” in January 2010, according to Travel China Guide. Before these lofty peaks became a world-famous tourist destination, the remote area was known only among three Chinese minorities. These were the Tujia, Miao, and Bai clans. 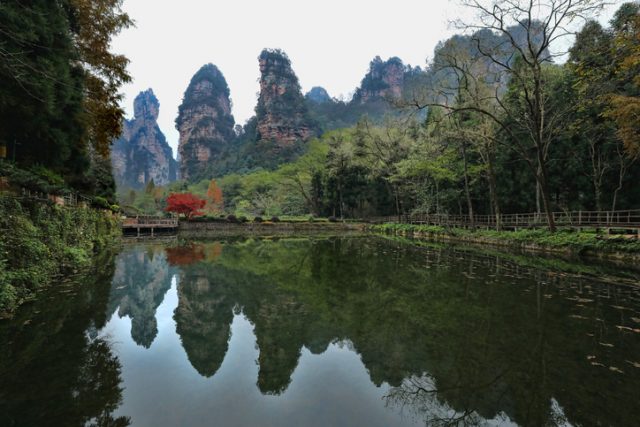 Part of the Wulingyuan Scenic Area, which was declared a a UNESCO World Heritage Site in 1992, Zhāngjiājiè (张家界) received recognition as China’s first National Forest Park in 1982. This protective title helps preserve the park’s beauty, as well as the 1,000 distinct species of plants that sprout from the crevices of the elevated stones.

Taking a glance at the structures, their sheer height is possibly the first thing that onlookers will notice. Silent and substantial, these towering rocks reach thousands of feet into the air.  According to Lonely Planet, “Some 243 peaks and more than 3,000 karst pinnacles and spires dominate the scenery.” 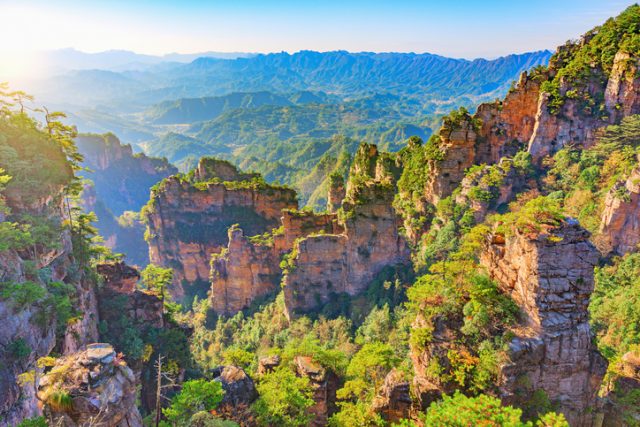 From their bodies extend lush vegetation, giving the stones a greenish tinge from a distance. The blue hue from the sky, combined with this interesting color palate and the drifting mists that gather around the lower halves of the towers, make a breathtaking sight to behold. In the right light, these stoic giants produce an otherworldly aesthetic, which can definitely captivate any tourist. 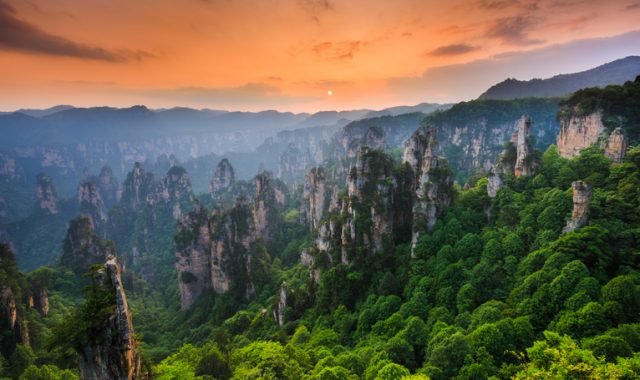 Flora isn’t the only living thing to thrive on these peaks. Tourists traveling the main trails are likely to encounter macaques which have become accustomed to humans passing through their habitat.

Other species include the endangered Chinese giant salamander and the Chinese water deer. But the most mysterious of all is the clouded leopard — a species of big cat that has left trails on the mountains but has yet to be seen by man, lurking deep within the forest of rich vegetation and tall stones. 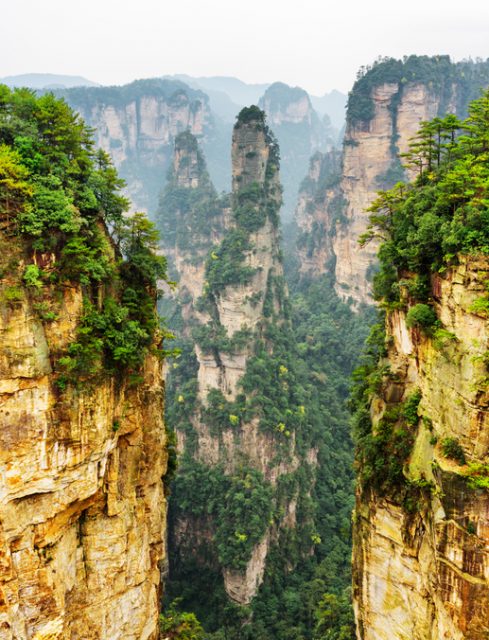 But other than the incredible stones themselves, the area is also home to unique provincial culture. Around the forest park, countless locals have put up quaint little food stalls to cater to tourists. Their home cooked meals — including a hearty, spicy hot-pot recipe — perfectly encapsulate the rich resources that they enjoy in the area.

The picturesque Avatar Hallelujah Mountain, photographs of which are said to have inspired the setting for the home of the Na’vi people in the movie Avatar, stretches 3,544 feet into the sky. This stone column is a landmark in the forest and is the most pictured peak of all, as tourists try to imagine themselves as explorers on the alien world of Pandora. 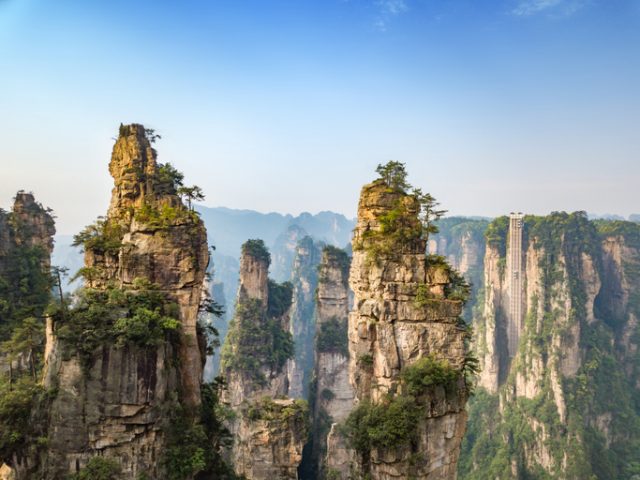 In 2010, China acknowledged the use of their scenic National Park as the setting for the movie, and so the government let the movie play in their local cinemas — making the film one of 20 Hollywood productions to ever play in the country. Unfortunately the movie was pulled out just two weeks after its premiere, causing speculation that the political undertones in the movie’s plot may have reflected the plight of the Chinese people too closely for comfort. 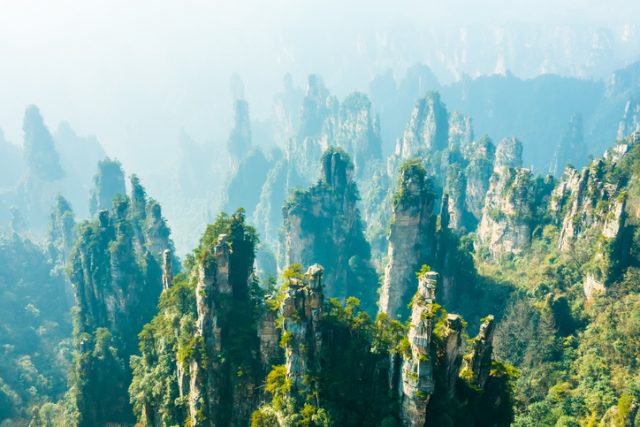 Despite this, the movie became one of China’s highest grossing films to ever show on the silver screen. What’s more, the movie also stimulated interest anew among tourists, making the Zhāngjiājiè National Forest Park even more popular as a global travel destination. Since then, the park has seen some improvements in order to accommodate the growing flocks of visitors each year.

Read another story from us: Tourists Flock to this Poison Garden – But a Trip There Could Prove to be Fatal

For instance, in 2016, the (terrifying!) Zhāngjiājiè Grand Canyon Glass Bridge — the longest and the highest of its kind — was opened to visitors hoping to breathe in the beauty of the stoic monoliths of the park.