November 16, 1992 was the day which changed Suffolk-resident Eric Lawes’ life in a huge way. What he thought would have been an innocent search for a hammer he had misplaced on his farm in Hoxne Village, Suffolk, England ended up bringing him much more than he had bargained for — namely, uncovering the hiding spot of a long-hidden treasure.

Based on the Guardian’s coverage of the story, Eric Lawes had been previously gifted a metal detector upon his retirement as a parting token. He decided to put his retirement gift to good use in order to locate the hammer which he had had some trouble finding.

According to a 2018 Smithsonian Magazine article, when the device started recording that there was a strong signal coming from the earth, he knew that he was about to discover something big. As he started digging, it soon became clear to him that he had unearthed a treasure trove. 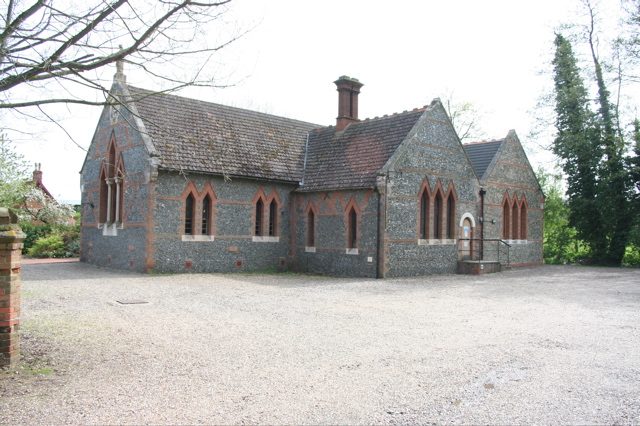 The Guardian reports that, when Lawes saw that his preliminary digging had yielded a few gold coins and silver spoons, he immediately contacted both the local archaeological society and the police department.

Archaeologists came to the property the following day and had the area of earth holding the treasure carefully sectioned-off and removed. Their hope was that at a later stage, in their laboratory, they could examined the items in order to identify both their age and how they were stored. 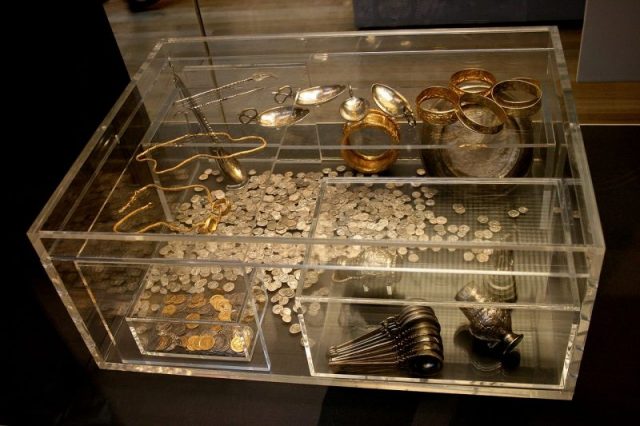 Hoxne Hoard: Display case at the British Museum showing a reconstruction of the arrangement of the hoard treasure when excavated in 1992. Photo by Mike Peel CC BY-SA 4.0

When all was said and done, close to 60 pounds of items made from silver and gold were found on the site. These included more than 15,000 Roman coins, 200 gold objects, and several silver spoons.

For archaeologists, this find — which later became labeled as the Hoxne Hoard — was an incredible discovery. AP News reported that archaeologist Judith Plouviez was over-the-moon about the discovery, saying that it was “an incredibly exciting and amazing find.” What’s more, another archaeologist, Rachel Wilkinson, told Smithsonian Magazine that this discovery was “the largest and latest ever found in Britain.” 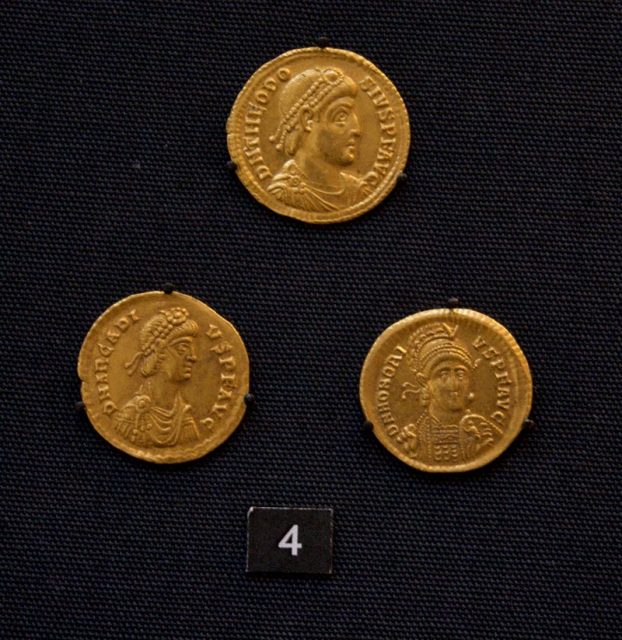 Ordinarily, archaeologists would use radiocarbon dating as a means of identifying the age of ancient relics. However, they couldn’t locate any suitable material from the haul. Consequently, they determined the age by examining writing on the coins, as well as the ruler carved into them, estimating that the treasure was probably buried in either 408 or 409 AD. 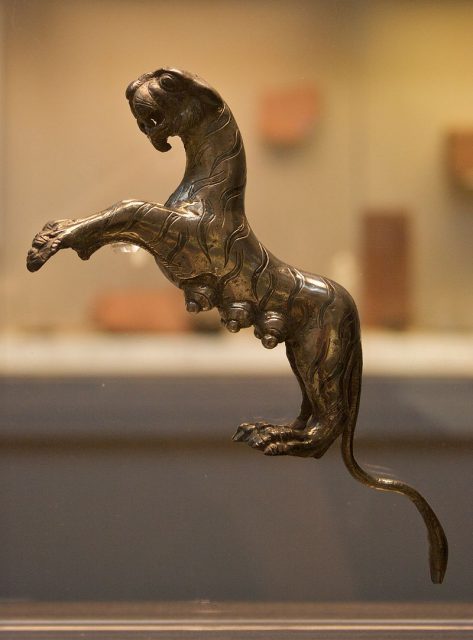 The silver “Hoxne Tigress” – the broken-off handle from an unknown object – is the best known single piece out of some 15,000 in the hoard. Photo by Mike Peel CC BY-SA 4.0

Roman-era archaeologist Peter Guest told Smithsonian Magazine that “if you look at them a little more carefully, then they should be dated to the period after the separation of Britain from the Roman Empire.”

He offers as part of his evidence the fact that almost all of the coins found in the Hoxne Hoard were clipped – in other words, small chunks of their edges had been taken off. These clippings would have been used to create coins which were similar to the Roman coins of that era.

A silver-gilt spoon with a marine beast from the Hoxne Hoard. Currently in the British Museum. Photo by JMiall CC BY-SA 3.0

Guest has a logical reason for this, arguing that “The Roman Empire wasn’t supplying Britain with new gold and silver coins, and in light of that, the population tried to get over this sudden cutoff in the supply of their precious metals by making the existing supplies go further.”

Archaeologists also believe that the treasure belonged to a Romano-British family. During that time, considering that there was so much societal discord and upheaval, it was common for Romans who had settled in Britain to bury their most prized possessions.

Two gold bracelets from the Hoxne Hoard, in the British Museum. Photo by Fæ CC BY-SA 3.0

That said, one archaeologist is of the belief that the hoard had a lot of sentimental value for the Romano-British family to whom it is believed to have belonged. In her book The Hoxne Late Roman Treasure: Gold Jewellery and Silver Plate, Catherine Johns claims that the manner in which the treasure was kept supported this claim.

Some of the items which were recovered had been packaged in small, wooden boxes which were lined with leather. What’s more, pieces of wood, locks, and nails, among other things, surrounded the gold and silver pieces. This leads Catherine to assert that the package was carefully buried and not simply chucked away in a rush. 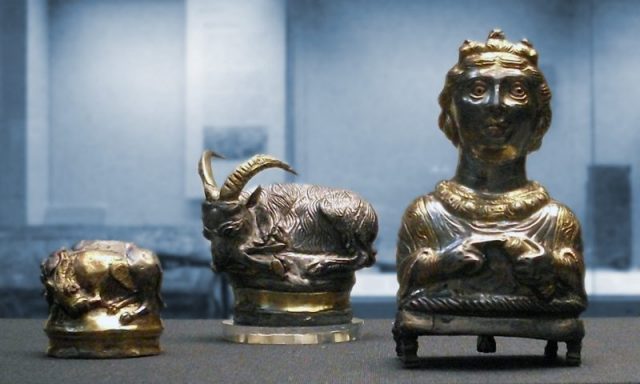 Interestingly enough, the items unearthed might shed some light on the identity of the family who owned them. They cite a gold bracelet bearing the inscription “UTERE FELIX DOMINA IULIANE,” which roughly translates to “use this happily Lady Juliane”.

A second name “Aurelius Ursicinus” has also been discovered. This has consequently led some to believe that Juliane and Aurelius were the couple and the original owners of the treasure. That said, that has yet to be confirmed. 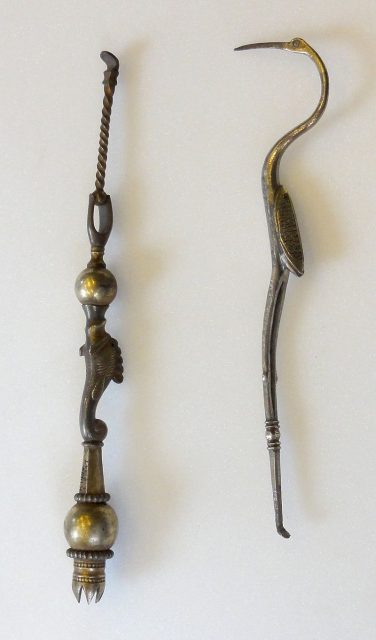 Two toiletry items, one in the shape of a crane-like bird; the other with an empty socket, probably for bristles for a makeup brush. Photo by Fæ CC BY-SA 3.0

All in all, the discovery was a real treasure for archaeologists, and by extension, for Lawes. According to Smithsonian Magazine, in recognition of his discovery and willingness to contact authorities, the British government rewarded him with over £1.7 million, an amount which he shared with the farmer whose land was dug out in order to get the treasure.

Funnily enough, apart from the treasure, Lawes also found his lost hammer — which now resides in the British Museum.