How the Hunchback of Notre Dame Once Saved the Crumbling Cathedral

Monday April 15, 2019 became a terrible day for people from all over France, and arguably the world, as they watched the iconic Notre Dame Cathedral of Paris going through a destructive fire. The fire notably caused the roof of the cathedral to collapse, including its famous spire. Stephen Murray is an art historian and professor at Columbia University. According to the Washington Post, he is also a member of the Friends of Notre Dame of Paris Foundation.

“Parisians have had a direct relationship with their cathedral,” Murray commented to the Washington Post. “And I think it was largely because of the wave of interest because of the book.” 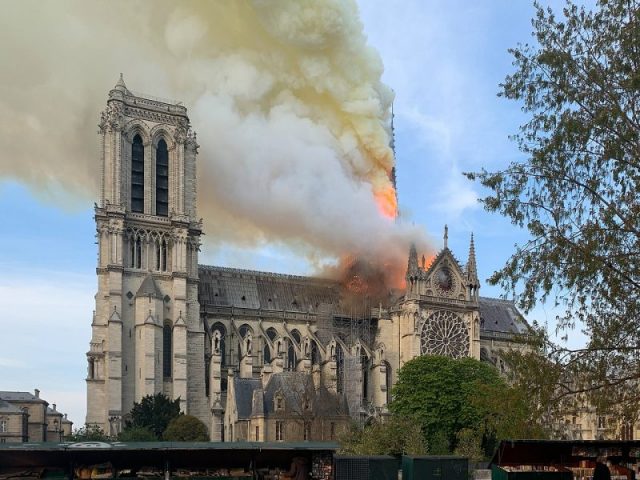 The fire at an early stage, viewed from the south. Photo by Wandrille de Préville CC BY-SA 4.0

Notre Dame was indeed a symbol of Paris. Built between 1163 and 1345, the monument has withstood many hardships during its history. As reported by National Geographic, Notre Dame went through a difficult renovation under the reign of King Louis XIV. Over the course of time, these reparations ended up damaging the Cathedral more than fixing it. The recent fire which engulfed much of Notre Dame also happened during renovation works. See a video of it here:

Many of the stained glass windows were then replaced with clear glass. The three rose windows are the only ones known to be from the original work, and which survived the recent fire. The French Revolution brought more troubles to the cathedral. Because the French monarchy had been strongly attached to Catholic traditions, revolutionaries rebelled against the Catholic Church. The crowd most notably destroyed the statues in the cathedral’s Gallery of the Kings, mistaking the ancient Kings of Judea and Israel for the French royal lineage. 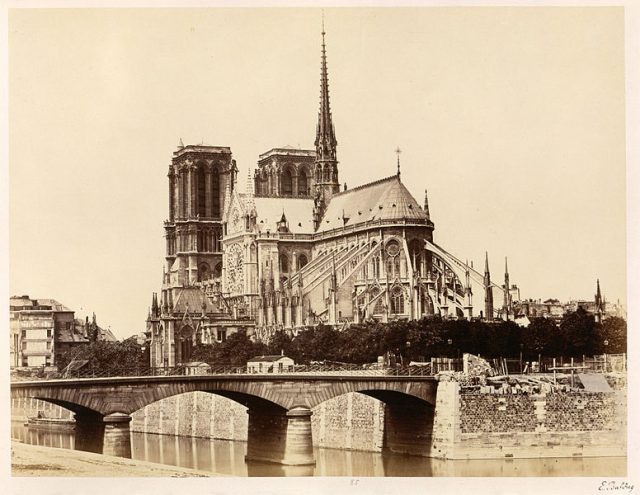 Not only was the cathedral sacked, with many of its statues and relics destroyed and its lead used for bullets and canons, but revolutionary leader Robespierre made great efforts to de-Christianize it. Notre Dame was then used as a sanctuary for Robespierre’s own religion, the cult of the Supreme Being.

The cult of the Supreme Being aimed at connecting religious, civic, and moral ideas, according to Alpha History. It was sanctioned as a French national religion in 1794 by the National Convention (government of the French Revolution). 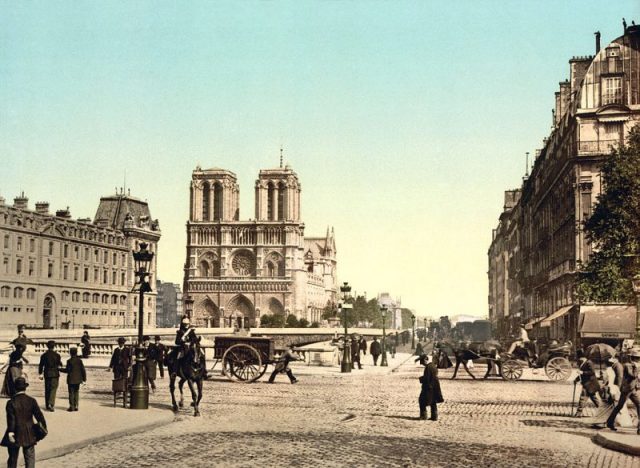 After the Revolution, Napoleon Bonaparte started a movement to restore Notre Dame. While he was Consul of the French Republic, Bonaparte gave control of the cathedral back to the Catholic Church in 1801, and in parallel outlawed the Cult of the Supreme Being. He was crowned French Emperor in Notre Dame in 1804, after leading restoration works. But the cathedral owes its most significant renovations to a novel. 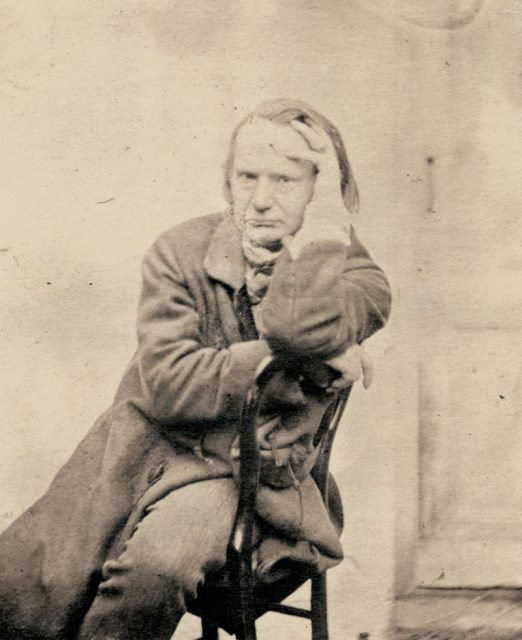 Famous French author Victor Hugo was a leader of the romantic literary movement of the 19th century. According to Britannica.com, “Romanticism emphasized the individual, the subjective, the irrational, the imaginative, the personal, the spontaneous, the emotional, the visionary, and the transcendental,” and took interest in cultural nationalism. It also had an interest in medieval architecture, leading to the Gothic Revival.

In 1831, Hugo wrote The Hunchback of Notre Dame, the story of Quasimodo, a hunchbacked bell ringer who falls in love with a beautiful gypsy girl named Esmeralda. Rejected by the locals, Quasimodo finds sanctuary inside the cathedral, which becomes the theatre of an intense love story. 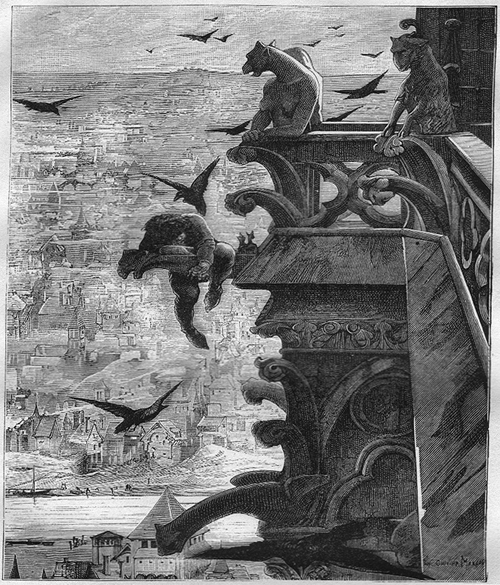 Notre Dame is, in fact, the main character of Hugo’s book, the Washington Post says. Two chapters are entirely devoted to the sole description of the monument. As Romantic authors’ appreciated Gothic architecture, Hugo’s book is a tribute to Notre Dame, dedicated to its preservation.

Hugo was an important advocate of preservation. He so firmly opposed the destruction of medieval buildings he wrote: “It is difficult not to wax indignant, before the numberless degradations and mutilations which time and men have both caused the venerable monument to suffer.” 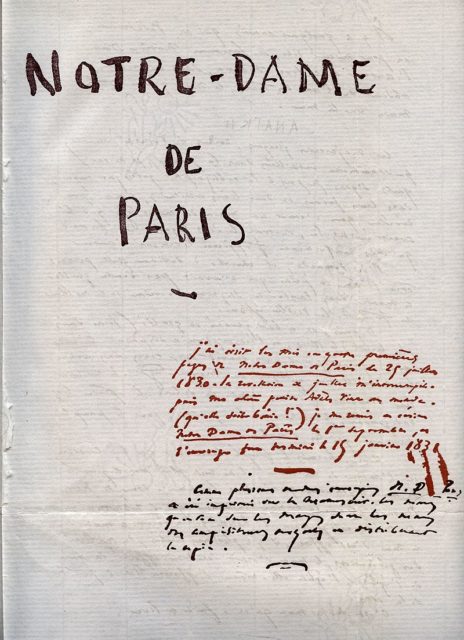 His efforts did not take long to pay off. In 1844, French architect Eugène Viollet-le-Duc was put in charge of a new renovation project. The colossal work nearly took 25 years, but resulted in an impressive revival of the old cathedral. Rare footage of the cathedral at the end of the 19th century along with other Parisian sights was captured by the Lumiere Brothers, one of the earliest creators of moving pictures. Take a look at the beautiful footage here:

As National Geographic describes, Viollet-le-Duc restored the façade of the Gallery of the Kings, and added features such as the spire, the statues of the Twelve Apostles, and the gargoyles which became famous thanks to Hugo’s novel. 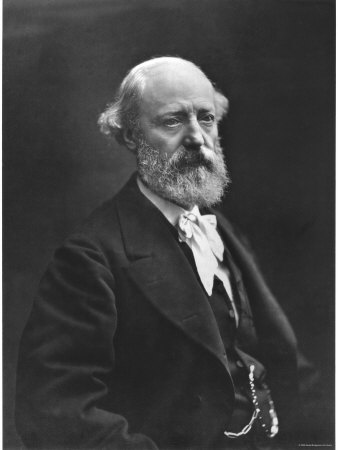 “Viollet-le-Duc must have lived and breathed that building,” said Murray. The Hunchback of Notre Dame has become such an iconic novel, it has been adapted to movies more than a dozen times, the Washington Post reported. Back in the 19th century, it had a tremendous impact on the restoration effort of the cathedral. 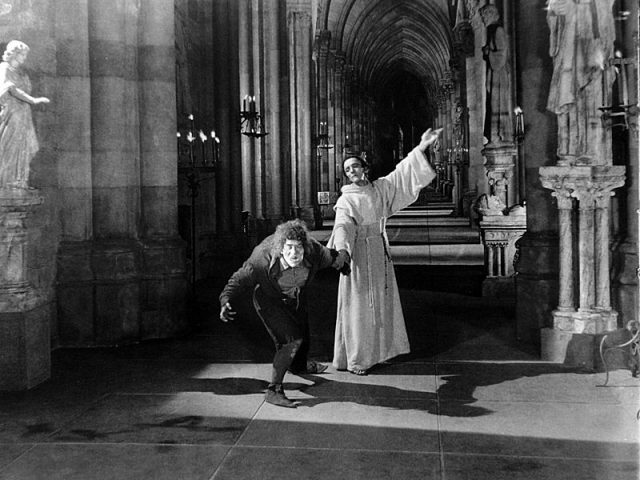 Today, Hugo’s novel is already having another impact: according to The Guardian, various editions of the book were ranked among the top positions of Amazon France’s bestseller list.

Read another story from us: Assessing the Damage of Notre Dame – What Survived and What Didn’t

While the book sales may not pay for the reparations the building will have to go through, they are a sign of how attached to their beloved cathedral French people are. Hugo’s book can also provide relief, as a symbol of a monument previously restored, which can go through yet another challenge.