The United States may be a relatively young country, having been founded in 1776, but it has some ties with the Middle Ages. The Sovereign Military Order of the Temple of Jerusalem (SMOTJ) was founded in the 1960s in the United States, following in the footsteps of the Knights Templar, a Christian order dating back to the Crusades.

After the First Crusade (1095-1099), several states known as the Crusader States were established to protect Christians on pilgrimage to Jerusalem, Britannica.com reports. In 1119, following a series of attacks by raiders to reclaim Jerusalem, a bunch of mostly French knights, under the leadership of Hugues de Payens decided to establish a Christian military order to help secure passage for the pilgrims. At least this was the official reason given for the creation of the Order. 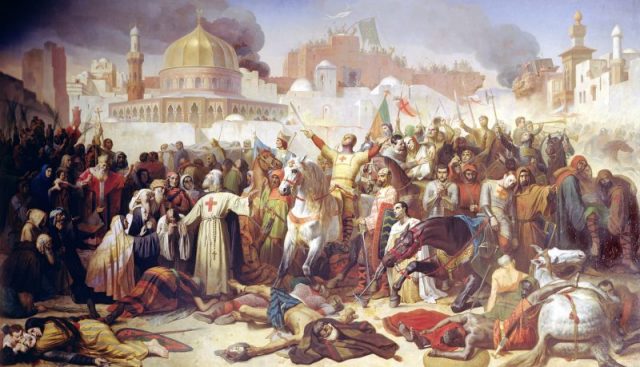 Taking of Jerusalem by the Crusaders by Emile Signol. A 19th century painting depicting the end of the Siege of Jerusalem on July 15, 1099, during the First Crusade

Thus, was born the Order of the Poor Fellow-Soldiers of Christ and the Temple of Solomon. The Templars received the support of the King of Jerusalem at the time, Baldwin II, and set up their headquarters on Temple Mount, causing them to change their name to the Knights Templar, according to History.com.

With the help of prominent French abbot Bernard of Clairvaux, who most notably wrote In Praise of the New Knighthood, support for these warrior monks grew significantly. Clairvaux’s text defended the existence of the Order and helped convince many Christians of its importance. 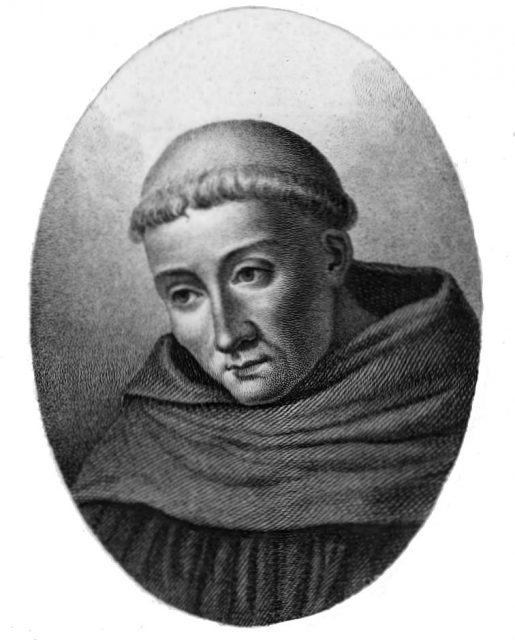 This rise in influence eventually translated in gaining support from the Pope. In 1139, Innocent II issued a Papal Bull – an official letter from the Pope – that exempted the Templars from paying taxes and allowed them to build their own places of worship. Showing their great power and independence, they were also placed under the sole direct authority of the Pope himself.

Over the course of the 12th and 13th centuries, the Templars fought across the Holy Land, and gained a reputation of fearless warriors, Britannica.com says. This greatly increased their influence and wealth: many Templars had gained estates and seniorities across European kingdoms such as France, Spain and England.

As new chapters of the order were established all over Europe, the Templars established an important banking network, History.com says. Holding a significant part of Europe’s wealth, the Templars were at their most influential during the 12th century. However, with this great influence and power came a stronger European opposition, most particularly from the rival order of the Knights Hospitallers. 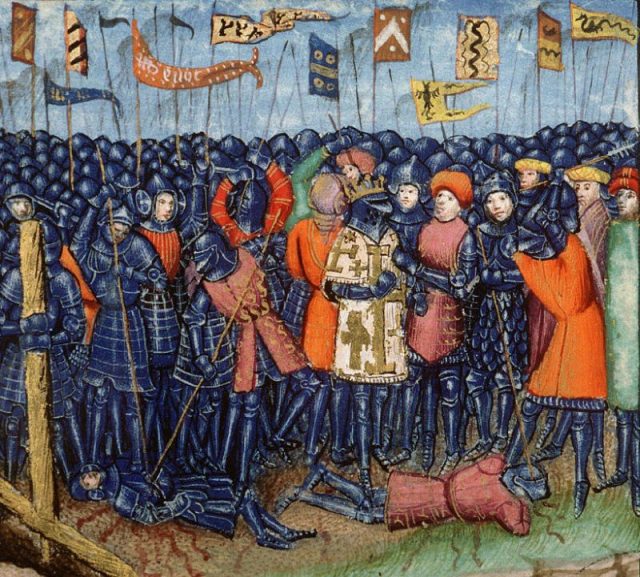 After the Battle of Hattin in 1187, the armies led by Saladin had opened their way to regaining control of Jerusalem. The Templars remained in the Holy Land to protect the Crusader states during the course of the 13th century, with several attempts to regain control of the region. After the fall of Acre in 1291 however, the Crusaders had no foothold left in the Holy Land, and the Templars relocated to Paris.

Having lost their original purpose to protect the Holy Land, and facing greater opposition to their wealth and power, the Templars were bound for destruction. 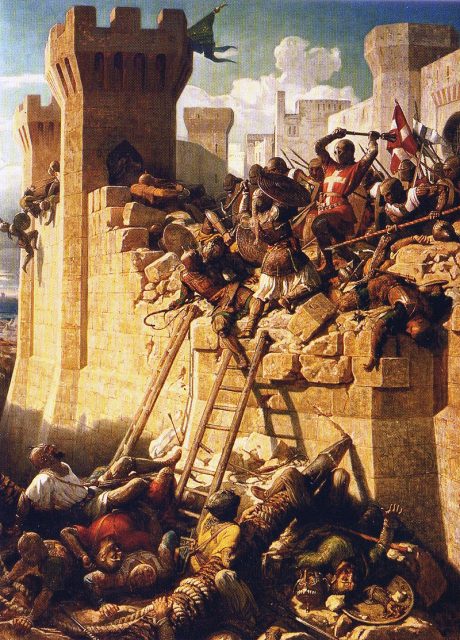 The Seige of Acre by Dominique Papety. The city fell to the Mamluks in 1291

King Philip IV of France pressured Pope Clement V to disband the order. In 1307, Clement V issued the Papal Bull Vox In Execlso, which falsely accused many Templars of charges such as blasphemy, devil worship, indecency, and financial corruption. The order’s grand master Jacques De Molay was executed in 1314, marking the end of the original order of the Knights Templars. 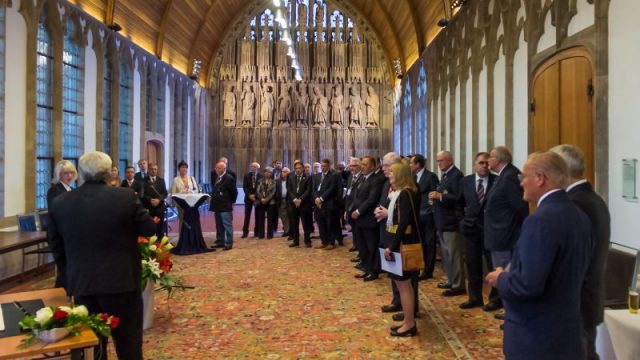 Reception for the council of Templar revivalist group The Sovereign Military Order of the Temple of Jerusalem in Cologne, Germany. Photo by Raimond Spekking / CC BY-SA 4.0

The organization counts over 10,000 members worldwide, including 1,500 in the United States. While SMOTJ reenacts the traditions of the Knights Templar, its members do not see themselves as mere reenactors: they see themselves as emulators of the Medieval order with a mission to revive the mission and form of Christian traditions practiced by the Templars. They also make it clear on their website that they are not in any way associated with Freemasonry. 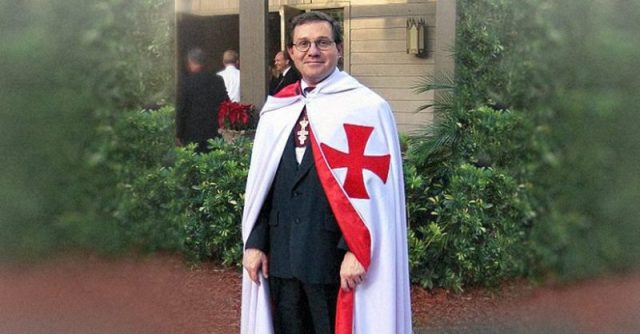 Their two main missions, as stated on their website, are as follows: “Protecting Christians at Risk particularly in the Holy Land and the Middle East and Keeping the Road to Jerusalem open to all people as our own.”

“The only thing we don’t do is fight,” Grand Treasurer of the Temple of Jerusalem Joe Auteri said to Smithsonian Mag. While the Order does not fight anymore, its mission remains to help Christians in the Holy Land. It most notably funds schools in the region, having raised $407,945 in 2017. Some of its members even serve as advisors to the United Nations, advocating for peace in the Middle East. 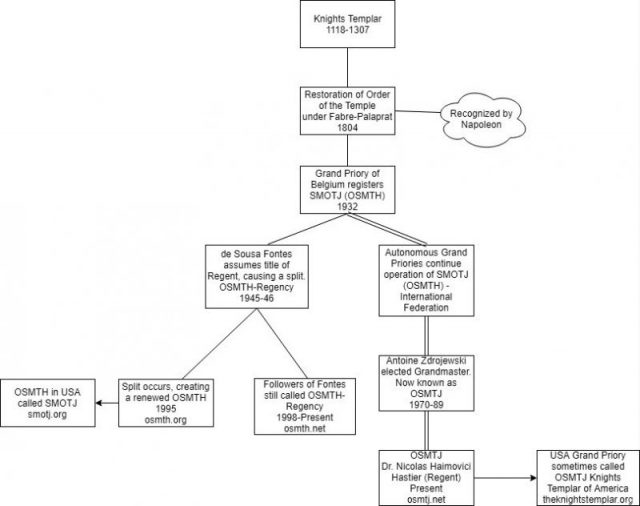 Flow chart showing the various splits within the Templars since their formation in the 12th century. Photo by Vespercirrus CC BY-SA 4.0

To avoid confusion with any other Templar revivalist group, The Sovereign Military Order of the Temple of Jerusalem has a legal advocate who registers the organization’s trademarks, in an effort to keep its own identity. Indeed, Smithsonian reports that many other Templar revivalist organizations exist around the world, yet none have the same legitimacy as the SMOTJ. In 2018 the organization celebrated 900 years of the Templars (1118-2018)

Read another story from us: A Secret Knights Templar Tunnel that Remained Hidden for 700 Years

As described on its website, The Sovereign Military Order of the Temple of Jerusalem bases itself off the traditions of the original Order of the Knights Templar to achieve what it describes as spiritual idealism. In the modern world, today’s Templars seek new ways to revive an old order, with peaceful ways to reach the old objective of pacifying the Holy Land.