It made headlines in 2018 when researchers discovered the frozen remains of a foal that died 42,000 years ago in the Verkhoyansk region of Siberia, miraculously preserved in permafrost. But now an even more startling announcement has been made: Liquid blood and urine were found inside of the foal.

In an interview given to the Siberian Times, Semyon Grigoryev, head of the Mammoth Museum in Yakutsk, said, “The autopsy shows beautifully preserved internal organs. Samples of liquid blood were taken from heart vessels — it was preserved in the liquid state for 42,000 years thanks to favorable burial conditions and permafrost. The muscle tissues preserved their natural reddish color.”

Grigorvev then made the statement which is reverberating throughout the scientific community: “We can now claim that this is the best-preserved Ice Age animal ever found in the world.”

Scientists ‘confident’ they can clone an extinct horse species after foal discovered in Siberian permafrost https://t.co/Q3XKowR9bx

Researchers say this makes the foal’s blood the oldest ever found by 10,000 years. What is drawing worldwide attention is the researchers have told the media they plan to clone the animal. For this to be successful, viable cells will have to be extracted from the blood samples and grown in a lab.

Grigoriev has said there was one other case where liquid blood was found in an animal from the Pleistocene epoch: a frozen adult mammoth discovered in 2013 on an island that is off the northeast coast of Russia. Both Russian and U.S. media report that cloning attempts were underway with the mammoth as well, but have failed so far. 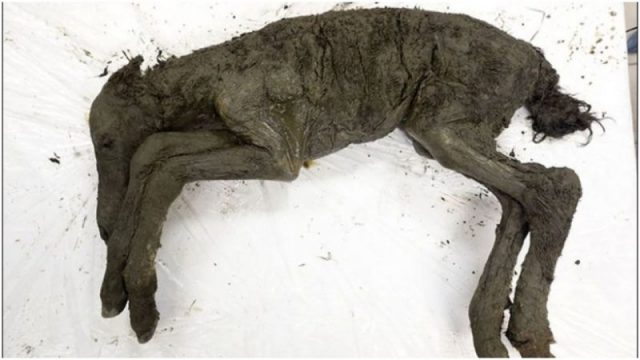 “As a rule, the blood coagulates or even turns to powder in the ancient remains of animals of the Ice Age, even if the carcass is preserved seems to be well,” Grigoriev said. “This is due to mummification when moisture and other biological fluids gradually evaporate over thousands of years, even if the remains are in the permafrost. The remains are preserved best if they are in the ice, as it was with our mammoth.”

Scientists ‘confident’ that they can extract cells to clone 42,000 year old extinct foal. A Russian and South Korean team is selecting a horse to become ‘mother’ to bring prehistoric species back to life https://t.co/2DUDx4k1Rz pic.twitter.com/y1sffDFw5B

There is some skepticism in the scientific community over the likelihood of the foal being cloned. Nonetheless, the Siberian Times reported that “work is so advanced that the team is reportedly choosing a mother for the historic role of giving birth to the comeback species.”

The foal is believed to have succumbed when just weeks old, after it most likely drowned in a muddy body of water. Scientists say that the mud and silt that the foal swallowed in its last moments of life were found in its intestinal tract. Mud froze the foal in, preserving it for many thousands of years.

Scientists Plan to Clone 42,000-Year-Old Horse Using Liquid Blood
The extinct equestrian species known as Lenskaya, or Lena Horse, according to the Siberian Times, which populated the remote corner of Russia between 30,000 to 40,000 years ago.https://t.co/qhQxBpJwgB pic.twitter.com/PCyrMqW4mi

At the time that the foal was found, Russian and Japanese researchers were searching for another frozen body of a mammoth that they could study and hopefully clone. The foal was found by digging beneath the surface of a crater in the Yakutia region. There the temperatures have been known to reach -60 Celsius. When they found the foal, its body still had hair.

The Russian research team is working with a controversial South Korean cloning team. In 2009 one of its heads, Woo Suk Hwang, was found guilty in a court for bioethical violations and embezzlement. Hwang admitted to falsifying data. The Siberian Times says that the foal’s body will be exhibited in Japan starting in June 2019.