Close to the medieval town of Weinsberg in southern Germany stand the ruins of a medieval castle. This once-imposing fortress was the site of a lengthy siege in the 12th century, which sparked a popular local legend and gave the castle its current name.

Today, the fortress at Weinsberg is also known as “Weibertreue”, or “Women’s Faith”, in tribute to the canny actions of a group of women. The women of Weinsberg are remembered today for their bravery and acumen, in saving the lives of all of the male fighters inside the castle by carrying them away on their backs at the end of the ordeal.

The legend of the loyal women of Weinsberg is recounted in the Chronica Regia Coloniensis, or the Royal Chronicle of Cologne, written sometime after 1175. The chronicler describes the siege of Weinsberg in 1140, as part of an ongoing conflict between rival German factions.

According to historian Maurice Keen, the conflict had arisen in 1137, after the passing of the Holy Roman Emperor, Lothair II. Lothair was quickly succeeded by Conrad of Hohenstaufen, who was elected in December 1137 and later crowned in March 1138. 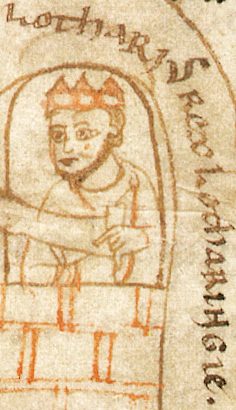 However, Lothair’s son-in-law, Henry the Proud of the Welf dynasty, simultaneously pressed his own claim to the throne, sparking a bitter dispute between rival noble groups across what is now Germany.

The castle at Weinsberg was loyal to the Welf faction, and Conrad proceeded to lay siege to its inhabitants in 1140. This would be the decisive battle of the war between the Welfs and the Hohenstaufens. Initially, the fighters inside the castle hoped for a relief force, but when the approaching army was defeated by Conrad, the inhabitants lost hope and negotiated a surrender. 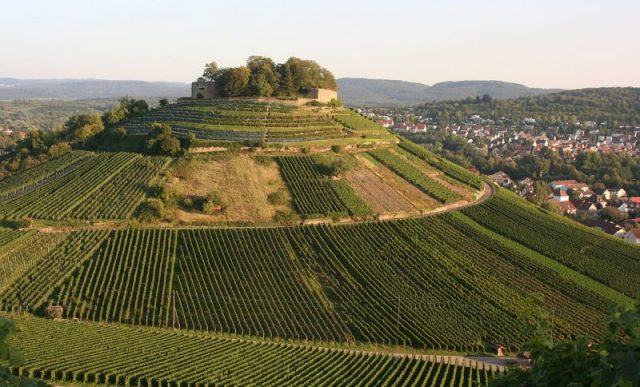 Conrad was determined to make the Welf loyalists inside the castle pay for their fidelity to his rival. However, as part of the negotiations, and as a gesture of goodwill, he permitted the women of the castle to leave unhindered, together with whatever they could carry on their backs.

Conrad intended for the women to leave with sufficient provisions to see them through the long journey to safe territory. However, according to the Royal Chronicle of Cologne, the clever women of Weinsberg defied him by leaving behind their provisions and instead walking from the castle with the men on their backs. 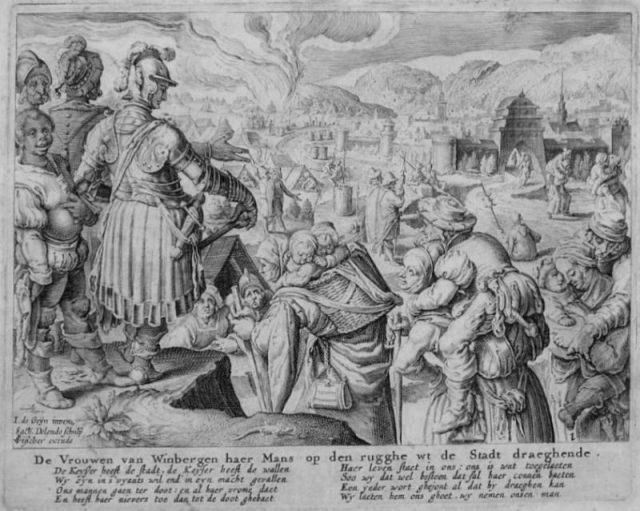 An artist’s representation of the siege of Weinsberg and the loyal women 1140. Copper engraving by Zacharias Dolendo, 16th century.

At this extraordinary sight, Conrad’s men, including a certain Duke Friedrich, implored the king to stop them from leaving the castle. But Conrad turned to them and said that it would be inadvisable for a king to go back on his word. He was so impressed with the clever and bold move played by the women that he allowed everyone to leave unharmed.

The Royal Chronicle of Cologne is the principal source for this extraordinary event, and it was written less than 40 years after the siege, well within living memory.

However, there are no other corroborating sources that attest to the women’s actions, and it is therefore difficult to judge the accuracy of the account. It may be that the story was invented in order to cast a positive light on Conrad III, calling attention to his magnanimity, mercy and fidelity to his own word.

Regardless of its veracity, the story of the women of Weinsberg has gone down in history as an example of strategic ingenuity and bravery even in the face of defeat.

Read another story from us: This Medieval Castle Played Many Roles in Monty Python and the Holy Grail

It also serves as a timeless reminder of the importance of specifying the fine print during negotiations, even if it seems that you have the upper hand.