A small indigenous Amazon tribe in Ecuador has surprisingly won a legal battle to halt oil drilling in their homeland. The Waorani (sometimes spelled Huaorani) tribe came out jubilant and victorious in a historic court ruling against the government, which had sought to drill for oil on a half million acres of their land in the Amazon.

The court held that the government of Ecuador could not auction off the land of the Amazon tribe for oil exploration without their consent. This verdict also disrupts the looming auction of 16 oil blocks that cover more than 7 million acres of land in indigenous territory by setting this legal precedent in the Eduadorian Amazon.

“The court recognized that the government violated our right to live free, and make our own decisions about our territory and self-determination,” Waorani leader Nemonte Nenquimo wrote to The New Yorker about the court decision. 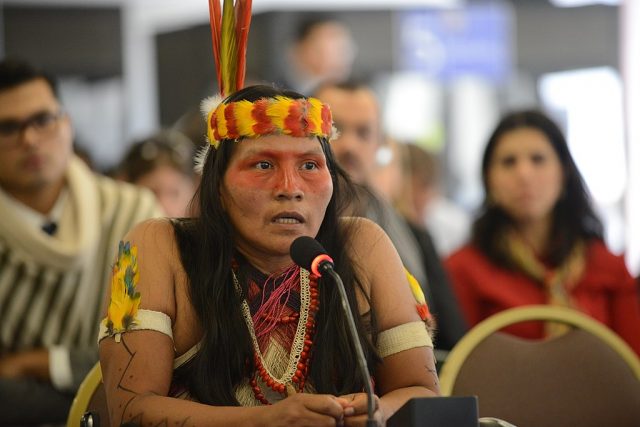 Alicia Cahuiya of the Waorani tribe in 2015. Photo by Daniel Cima CC by 2.0

The Waorani, who currently come to about 2,000 people, once maintained one of the largest territories of all indigenous Amazonians in Ecuador. They lived as nomadic hunter-gatherers in small settlements. Missionary groups relocated many Waorani families into larger communities to convert them to Christianity.  The Waorani are considered the most recently contacted of all Ecuadorian indigenous peoples, first reached by an American missionary group in 1958. 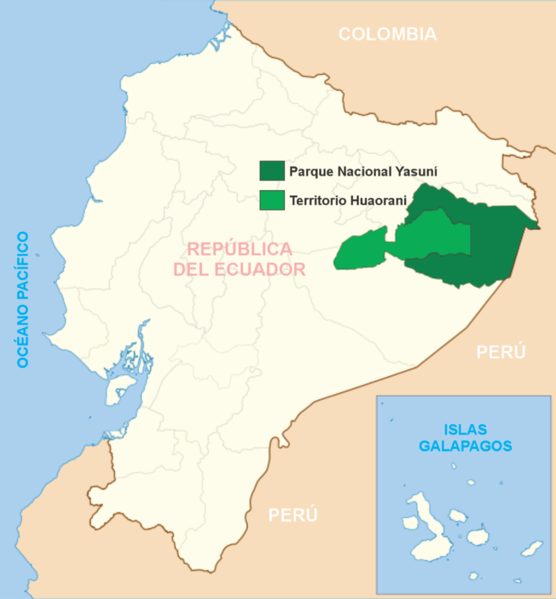 Territory of the Waorani (Huaorani) tribe in Ecuador. Photo by Markusquit CC BY-SA 3.0

Since that first contact, the Waorani have had a difficult time experiencing modern society.  The Waorani lost most of their land, and what was left was descended on by oil and logging interests. Oil drilling and road construction have hurt their interests, and they were known to fight back with spears and blowguns.

“The government sees oil and money but the Waorani see it is full of life,” Nenquimo said to France24 in April 2019. “Humans are changing the planet because big companies, big factories are destroying it. It is the moment now for the peoples to join and protest… If we don’t protest, if we don’t carry our actions, it means we are destroying the planet.”

On April 26th, hundreds of Waorani men and women formed a parade and marched in triumph through the streets of Puyo, the regional capital of the eastern province of Pastaza. 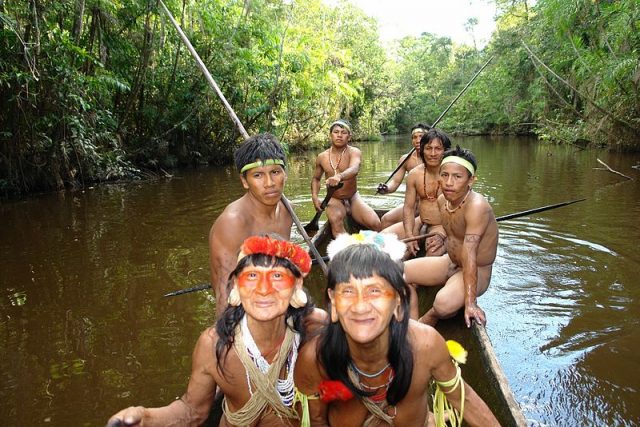 The essence of their court case was charging that the Ecuadorian government had not properly consulted with them before opening up their territory to potential oil exploration. The Waorani sued with the help of Ecuador’s Ombudsman, or public authority.

“Many of the Waorani representatives wore traditional dress in court and had red bars painted across their cheekbones and brows,” according to The New Yorker. “Singing a song about their traditional role as protectors of the forest, they drowned out the judge and lawyers until the judge finally suspended the hearing.” 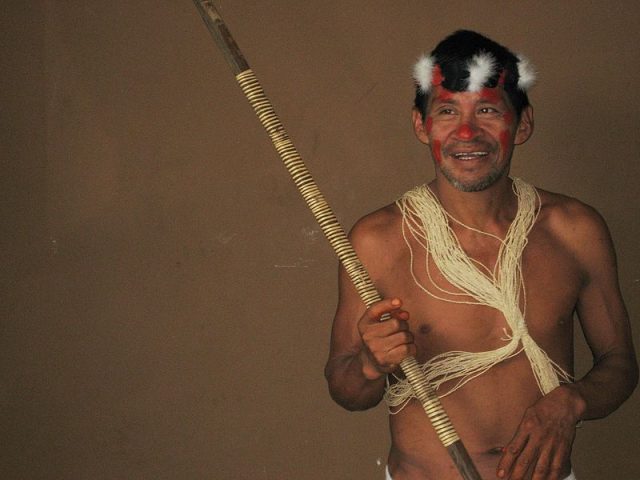 The government is constitutionally allowed to pursue oil drilling wherever they want to, but the people who lived on the land need to be first consulted. Nenquimo said that ministry officials did visit their community in 2012 but didn’t get their consent because the Waorani were on a hunting trip.

“A three-judge panel ruled in the Waorani’s favor, finding that the process did not afford the Waorani free, prior, and informed consent, and that their territory could not be included in an oil auction,” said The New Yorker. “The ruling could impact other indigenous groups whose lands are also up for oil exploration.”

Amazon Frontlines said in a press release that this ruling “could mark a watershed moment in the indigenous movement to permanently protect their rainforest from oil drilling, and other extractive projects. ”

Related Article: Last of His Tribe: Only Known Survivor of Extinct Amazon Tribe Videotaped in Jungle

Spokesman Oswando Nenquimo cautioned that “the fight is far from over. The government will appeal because they still want the oil beneath our land. Indigenous Nations across the Amazon and the world must band together to protect our homes.”

In May 2019, over 30,000 people sent emails to the President of Ecuador, his ministers, and the court, demanding that Waorani rights be respected.