Exciting discoveries on a tiny Greek ‘pyramid’ island in the Aegean Sea are leading to new scientific theories on prehistoric Greece.

Excavations on this island, 125 miles from Athens, are revealing the earliest truly monumental complex of buildings ever unearthed in the Greek world. “Dating back 4,600 years, the site may also have been part of the inspiration for a key aspect of Greek religion – the idea that mountain tops were the dwelling places of the gods,” according to The Independent.

In this remote and uninhabited pyramid-shaped islet, archaeologists discovered evidence of a rich cultural landscape dating to a time earlier than the Minoan age. The evidence indicates this was a major religious center created with technical knowledge pre-dating that found at Minoan Knossos by at least 400 years. This supports its playing a role in the development of Greek civilization.

Archaeologists recently competed a four-year study of a site in the Aegean Sea called Dhaskalio. The architectural features include stairways and drainage systems that re-shaped the islet, which confirms that Dhaskalio was home to an advanced civilization.

Researchers believe that these ancient architects “terra-formed” the pyramid-shaped island “mini-mountain,” known in recent centuries as Dhaskalio, to create around 1,000m of artificial terracing, arranged in six “steps” on its steep slopes. 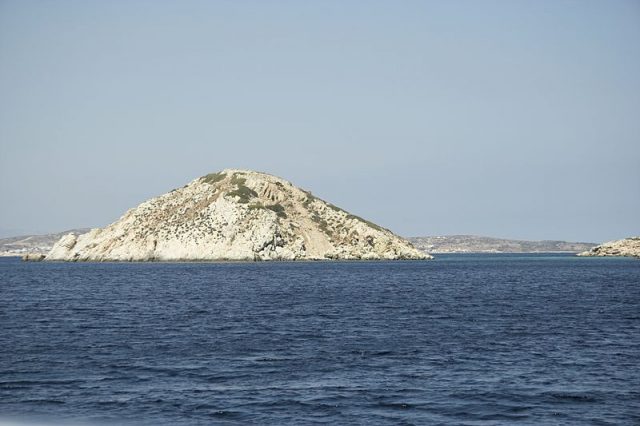 Another view of Dhaskalio islet. Photo by Zde CC by SA-3.0

They constructed what is thought to have been a huge religious sanctuary consisting of up to 60 marble buildings, which were created specifically to glisten in the sun.

Dhaskalio has been the subject of intense archaeological study since 2015, when this site was located. The research is being carried out by a multinational team, supported by the Greek government and the British School in Athens. Several international institutes provide funding. The Dhaskalio promontory is a tiny island created by rising sea levels, but 4,500 years ago it was attached by a narrow causeway to Keros, now uninhabited and a protected site. In the 3rd millennium BC, Keros was a place where complex rituals were enacted and where archaeological excavations have turned up fascinating and bizarre statues from the ancient Cycladic civilization, of which Dhaskalio would have been a part. 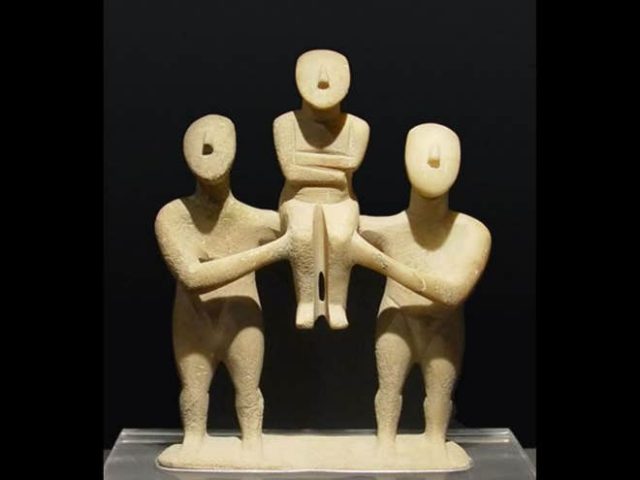 The research team believes that the Dhaskalio settlement flourished during the period known as the Cycladic Early Bronze Age, which spanned from roughly 3200 to 1050 BC. On the Greek pyramid island researchers found steep paths leading up to the summit and enormous platforms designed to be built upon. The buildings on the tiny island were made from good quality marble.

Cycladic female figurine, from Museum of Cycladic Art at Athens

The settlement of Dhaskalio required thousands of tons of marble along with obsidian building tools. All of this had to be imported from an island more than six miles away, suggesting these inhabitants were skilled sailors.

“Archaeologists now believe that, in order to construct the complex, early Bronze Age Greeks embarked on at least 3,500 maritime voyages to transport between 7,000 and 10,000 tonnes of shining white marble from one Aegean island to another,” according to msn. “Each return voyage would have required up to 24 crew members to paddle for around five hours.”

“It is by far the largest prehistoric marine transport operation that has ever come to light anywhere in the world,” said Dr Julian Whitewright, a leading maritime archaeologist at the University of Southampton.

“It demonstrates quite clearly just how important, and integral to their culture, seafaring was to these early Bronze Age Aegean people.”

The Greek pyramid island had a settlement with metal-working shops, buildings and even indoor plumbing, and all of this a millennium before the Minoans, who are often thought of as the first European civilization. According to the Keep Talking Greece website, the team of archaeologists have uncovered “a complex, stratified and technically expert society.”

Based on their finds, archaeologists now theorize the people of Dhaskalio may have played an important role in supplying weapons and other metal products to the surrounding islands.