The enduring story of Brown and Stigler is one for the ages and the YouTube channel YarnHub has brought it to life in impeccable animation like never before with the video below. War veteran Charlie Brown may have had an all American name, yet inside he was conflicted. Something happened to him as a young Allied bomber pilot. A near death experience that had haunted Charlie for decades. Finally, in the setting of a mid-Eighties veterans’ reunion, he told his friends what took place – an extraordinary story of bravery across the divide during one of the world’s darkest hours.

It was the run up to Christmas 1943. A 20 year old Charlie piloted a B-17. His mission and that of his crew was to bomb a Nazi munitions factory in Bremen. Hitting their target, they faced one last hurdle – escaping through German skies and back to base. But the enemy was swift and brutal to respond. The team met a barrage of bullets from no less than 15 enemy fighters. 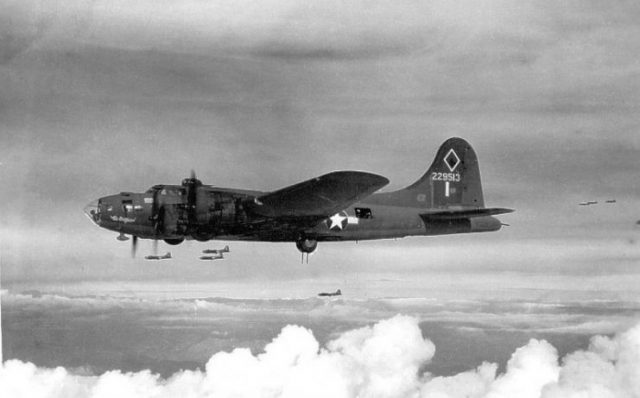 A B-17F of the 99th Bomb Group, with the nearly frameless clear-view bombardier’s nose

The resulting devastation was described by the Daily Mail in 2013. They wrote that “The rear gunner’s body hung lifeless in his shattered turret, another gunner was unconscious and bleeding heavily, the rest of the ten-man crew battered, wounded and in shock. The nose cone had been blown out and a 200mph gale hurtled through the fuselage.”

Perhaps most chillingly of all, the radio was out. Charlie’s only chance was to keep pushing that plane through the air. They could have abandoned the flight and parachuted into the clutches of the Germans. However they weren’t prepared to leave their unconscious brother to a fiery fate. It was home or nothing. Follow along with the whole incredible story of Brown and Stigler with the following Yarnhub video:

Charlie passed out and came to just in time. The B-17 had gone into a death plunge. Had he woken seconds later he might not have regained control of the bomber and things would have ended there. It certainly looked bad enough for the Messerschmitts to call off their deadly pursuit.

So by accident more than design, the Nazis called off the chase. Unfortunately the nightmare wasn’t over yet, or at least that’s how it seemed. The B-17 passed over the head of Lt. Franz Stigler, a 28 year old German pilot. He promptly jumped into his Me109 and took off in their direction. 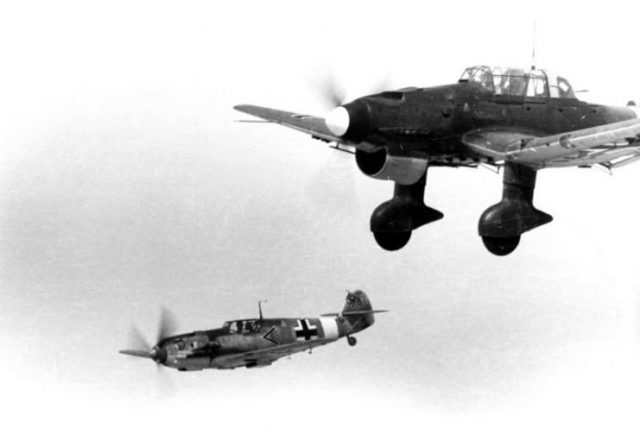 Franz wasn’t someone a bomber wanted on their tail. If he’d taken Charlie and his crew down, he would have clocked up enough targets – twenty-three – to receive the honor of a Knight’s Cross. However when he got within range of the plane, his motives changed.

Though Charlie didn’t realize at the time, Franz had noticed the dead rear gunner and recognized an opponent who’d already paid a heavy price. It was then he resolved to help them. The flying ace worked for the Luftwaffe, but was far from a paid up member of the movement. 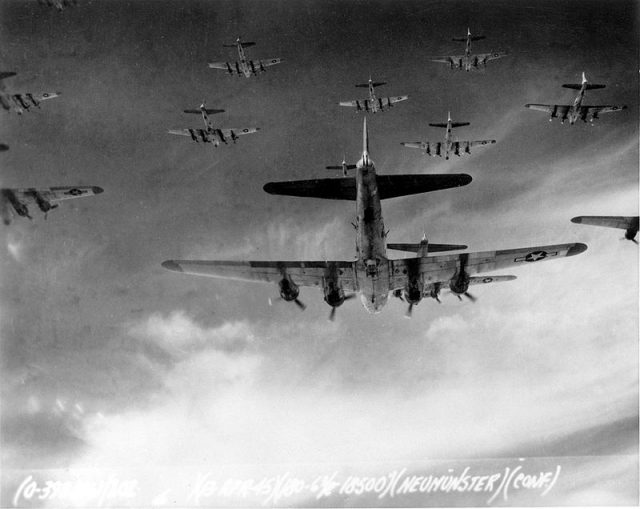 B-17 Flying Fortresses from the 398th Bombardment Group flying a bombing mission to Neumünster, Germany, on 13 April 1945.

He had the words of his mentor Lt. Gustav Roedel ringing in his ears. The Mail reported them as, “You shoot at a machine, not a man. You score ‘victories’, not ‘kills’… honor is everything… You fight by rules to keep your humanity. So you never shoot your enemy if he is floating down on a parachute. If I ever see you doing that, I will shoot you down myself.”

Knowing the harm it would do to his military career, and more importantly the reaction of his superiors if they found out, Franz attempted to steer Charlie along the right path. He flew very close to the B-17, nearly scraping its right wing tip. His aim was to signal at the crew to head east toward Sweden. The neutral territory would be a better place to land the plane than most, certainly the North Sea. 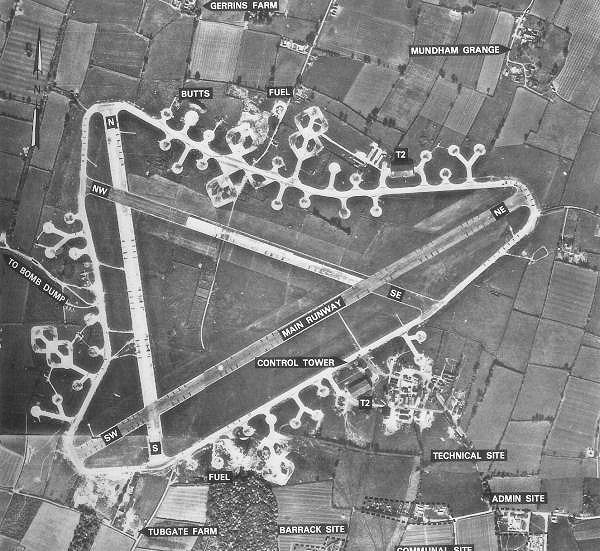 At Charlie’s end, the sight of a German pilot gesticulating at him was truly bewildering. Determined to reach base in Eastern England and wanting rid of an Me109 that could finish them at any moment, he had the surviving gun turret turned on Franz. With that, Franz saluted the crew and flew away. Unbeknownst to them, Franz kept in formation so he’d be visible to his own gunners along the coast. If he hadn’t done that, Charlie may have been shot down.

The stricken B-17 reached home but Charlie’s heart-stopping tale stayed a secret. Portraying Germans as sympathetic was not a good look, so he had to remain quiet about the situation. Charlie kept his silence diligently till that day many decades later, never knowing exactly what was behind his enemy’s unusual behavior. 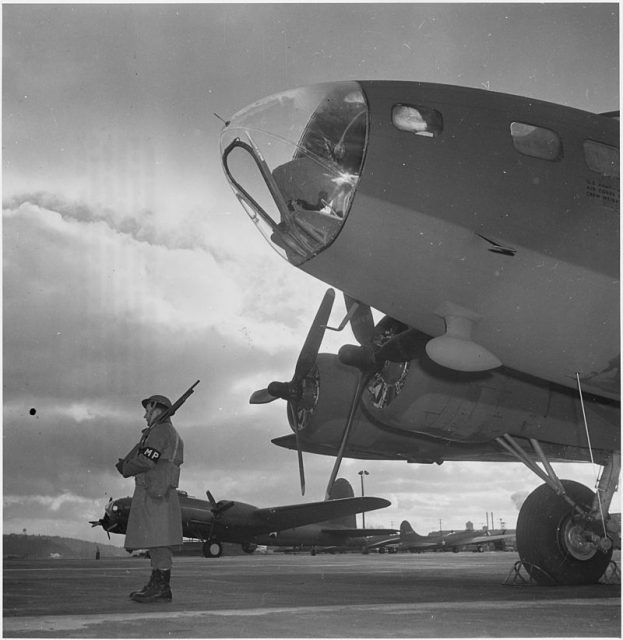 After unburdening himself to his fellow veterans, he decided to try and find the mystery flyer in 1990. He placed an ad in a military newsletter. Franz read it from his home in Vancouver, where he’d emigrated to work as a mechanic – coincidentally around 200 miles from Seattle, where Brown had spent much of his time post-war.

Charlie received a letter from Franz. An emotionally-charged phone conversation followed, reported by the New York Post in 2012:

“‘When I let you go over the sea,’ Stigler said, ‘I thought you’d never make it.’
‘My God,’ Brown said. ‘It’s you.’ Tears were streaming down his face. Stigler had answered Brown’s secret question without Brown having to ask it.”

Related Article: Pilot Departed from New York for a Non-Stop Flight to L.A – Landed in Ireland

It was the beginning a firm friendship that became brotherly. Having found each other and put the matter to rest, Brown and Stigler made sure the world knew about their boundary-breaking story. They even passed away in the same year, 2008, from the same cause, a heart attack. The American was 87, the German 92.