The Amazing and Ancient “Flintstone” Village Carved into a Spanish Cliff

The town of Setenil de las Bodegas in Spain has been compared to something out of the Flintstones. Why? Its combination of ancient stone and modern living certainly call to mind the legendary cartoon. It has also been likened to puppet paradise Fraggle Rock!

One look tells observers this is no ordinary destination. The striking houses are part of the ‘Pueblos Blancos’, a long-established Andalusian tradition of ‘White Towns’. Yet Setenil de las Bodegas is intriguing as it’s literally built into the rock. Their inhabitants follow in the footsteps of cave dwellers, with boulders providing support and the overhang of the cliffs forming the very roofs themselves. 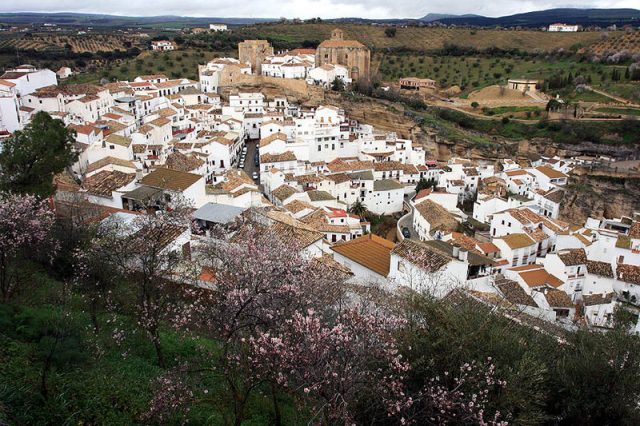 Setenil de las Bodegas in Cadiz Province, Spain is one of the well-known “white villages”. Photo by Jialiang Gao CC by SA-2.5 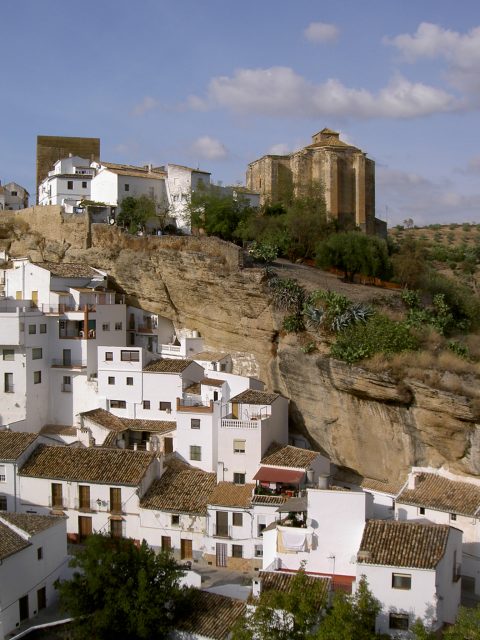 What’s the real story behind this distinctive location, which can be found in the province of Cadiz, southern Spain? The original caves may have been lived in since around 20,000 B.C. Links have been made to the region’s prehistoric past, with the place possibly playing host to a Spanish equivalent of Fred and Wilma. 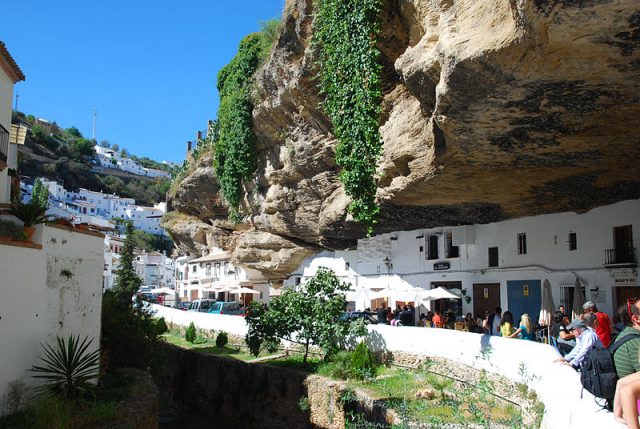 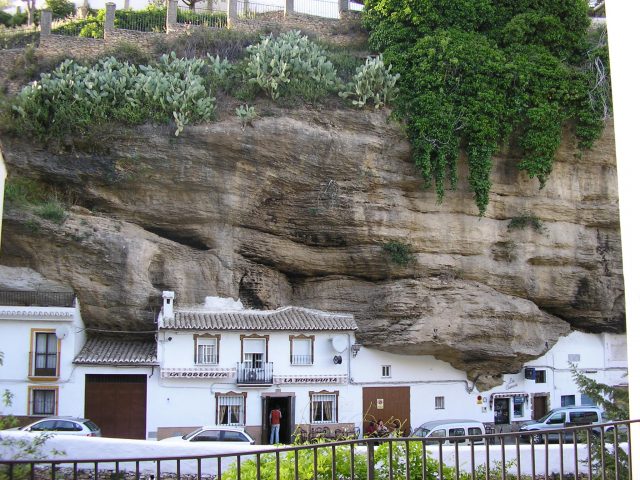 The first true inhabitant was the mighty Rio Trejo river. Everything was built in the eroded gorge created by its movement. The site was later invaded by the all-conquering Romans in the 1st century A.D., and traces exist of previous civilizations. As for how far back it all goes, no-one truly knows. Educated guesswork aside, the archaeology presents a varied and fascinating picture. 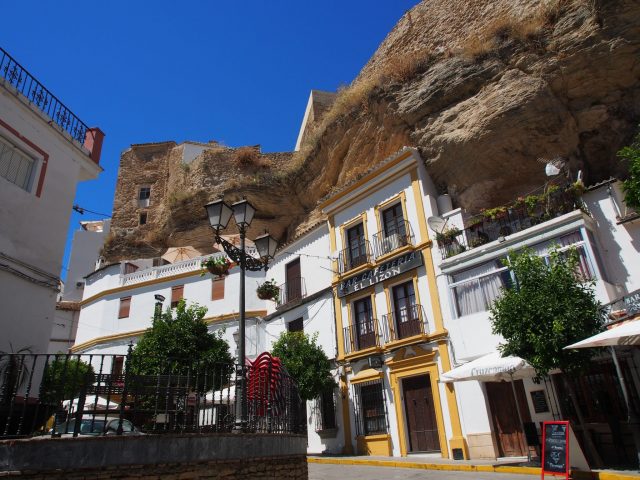 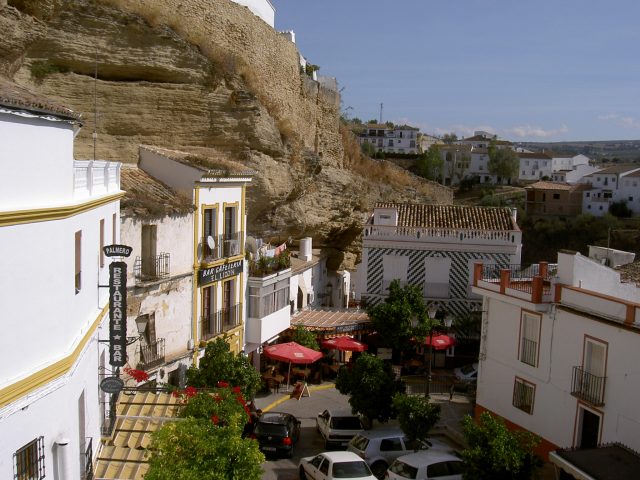 Photo by manuelfloresv CC by 2.0

Setenil.com has this to say about the general sweep of history. “Setenil is one of those towns whose origins are an enigma,” it states. “First, its blackish-roofed caves bring us back to prehistory, when our primitive congeners possibly used them as a natural refuge. From the ancient stage we know that the Roman colony Laccipo was located nearby. However, it is in the medieval era when the primitive urban settlement dates back to the same place as the current one.” 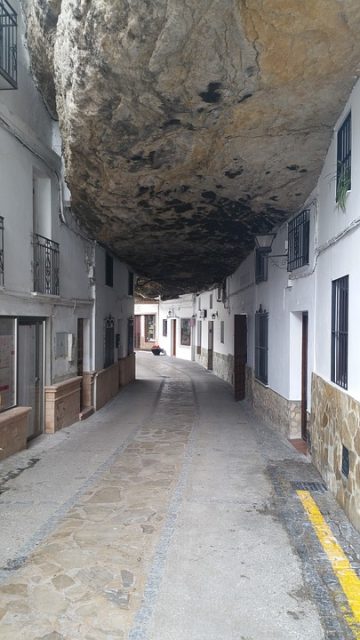 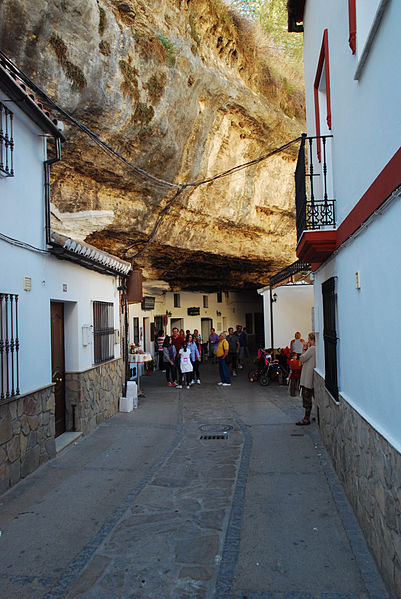 Photo by Andrei Dimofte CC by 2.0

The name Setenil de las Bodegas gives some pointers about the emergence of a modern community. It can be divided into 2 parts. ‘Setenil’ apparently comes from the Latin ‘septem nihil’, or ‘seven times no’. This refers to the Moors’ control of the area and their repeated fending off of Christian expansion. The formidable Moors occupied the area from the 8th century A.D and were finally overcome in the late 15th when medieval times were drawing to a close. 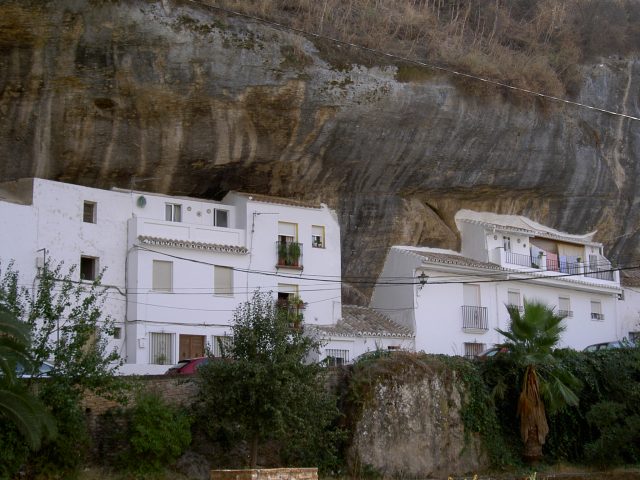 Photo by manuelfloresv CC by 2.0 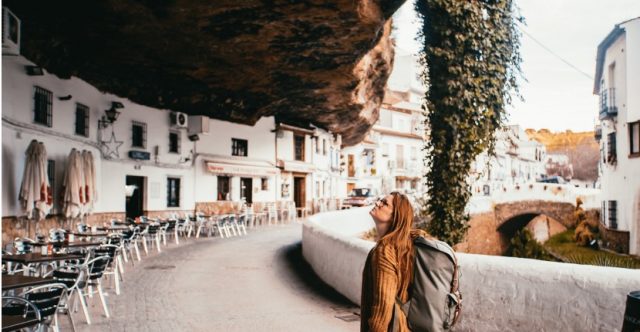 The second part, ‘de las Bodegas’ – ‘Bodegas meaning ‘wine shop or cellar’ – was added after because it seems the Christians liked their vineyards! The Daily Beast website wrote in 2014 that “The wine storage units, or bodegas, were perfect for the cool caves. Unfortunately, the grape industry in the region was later wiped out in the mid 1800’s by pests.” 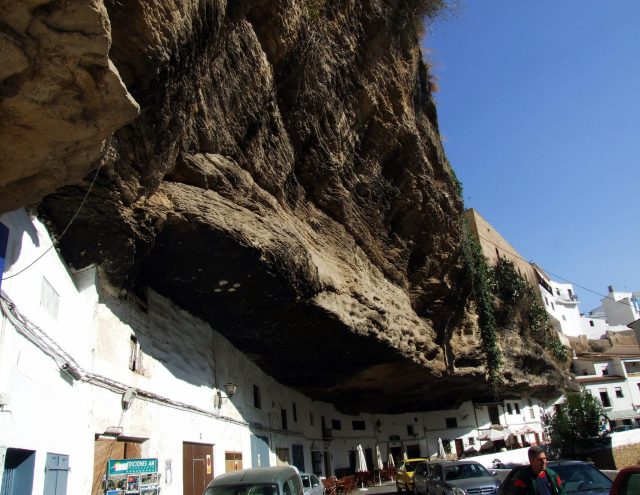 The excellent shade provided by the cliffs was great for produce. So why not humans trying to escape the heat, and indeed the pests? 3,000 live there at the last count, with a healthy tourist trade. Visitors enjoy the taste of authentic chorizo sausage and pork which is locally produced, together with pastries and other fine foods through which the town has made its name.

Historical detail is all around, such as the imposing presence of Nazari Castle. This enduring fortress is a relic of the Moors’ occupation. Today it contains an art gallery and gives people a bird’s eye view of the town.

While there’s still a lot people don’t know about Setenil de las Bodegas, it is a place where a sense of heritage is palpable. Just as the early inhabitants did all those years ago, the current population live their lives in harmony with nature’s awesome spectacle. And thanks to that epic quantity of rock they’re surely amongst the coolest residents in Spain!