Statuette of Female Gladiator Reveals Harrowing Side of Roman Games

Female gladiators in ancient Rome, an oft-overlooked aspect of the popular and dangerous sporting ritual. In 2012, National Geographic ran an article discussing a statuette from ancient Rome, currently housed in a German museum.  The statuette is of a bare-chested woman, holding a scythe-like object in her upraised hand.

Previously, historians had held to the idea that the object she was holding was a strigil, a curved blade used for scraping sweat and grime from the body.  Alfonso Manas, a professor at the University of Granada believes it is a particular type of short, curved sword called a sica.  The sica was a tool used by a variety of Roman gladiators known as a thraex or Thracian.

Manas’s theory is based on the way the woman’s body is positioned.  The statuette is looking down toward the ground and the hand that hold the tool is fully extended overhead, in an almost victorious pose which isn’t a posture you expect if she were bathing.  She’s also wearing a cloth wrapped around her hips, and if she were cleaning herself, you would expect her to be in her birthday suit.  He believes it makes more sense that she is standing victorious over a defeated opponent. 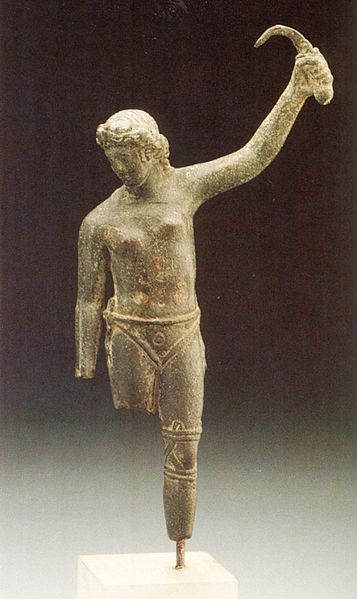 The statuette which Manas believes depicts a female gladiator.

As unexpected as it sounds, there is evidence that there were women who competed in the gladiatorial arena and they have come to be known as “gladiatrix”.  The website Ancient History notes that the women were referred to by several names at the time, according to documents from the time.  Ancient authors have called them ludia or mulieres and even amazonia.  One word, however that was not used to describe them was feminae, which means ladies. 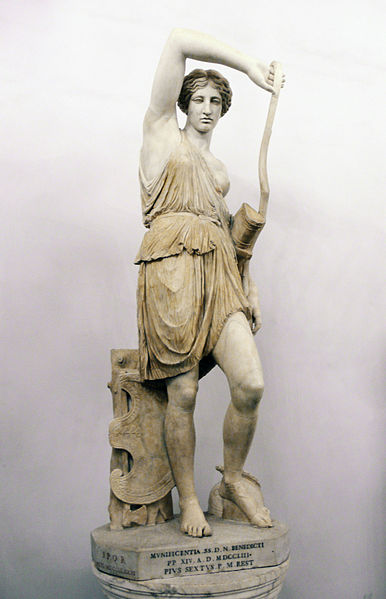 Statue of a female gladiator from ancient Rome. Photo by Cåsver CC by 2.0

Some scholars have taken that to mean that only women of the lower classes may have fought in the arena, but others say that isn’t true and there were women of the higher classes who participated as well.  If they fought well, they were as honored as their male colleagues.

It seems clear that those women who decided to fight in the arena – and there is ample evidence to prove that it was a choice – were, no matter how well they performed, less than respectable. At that period of history, the roles for proper female behavior were very well established.  Regardless of their class, they were expected to be focused on their families and the running of their households, and subject to the will of the paterfamilias, the male head of the family. 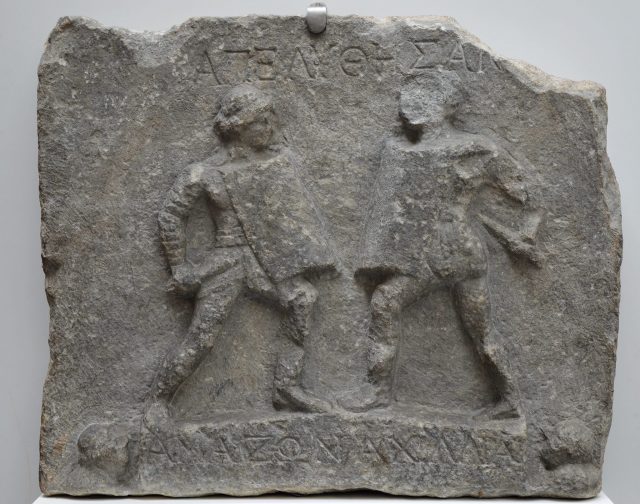 Going off to fight in the public arena was a long step away from those values. So much so, in fact, that it was difficult for scholars to accept. The word ludia, actually refers to a female performer in a festival, usually a religious one, and there were actresses of that stripe, although some of them clearly chose to veer off that path and head for the arena.

There were even laws that applied to female gladiators.  In 11 AD the Roman Senate prohibited a freeborn woman under the age of 20 from becoming a gladiator, which implies that it had been an issue long enough for it be codified into law.  The use of the word freeborn suggests that slave women weren’t subject to the same ban.

It wasn’t until the year 200 AD that the Emperor Severus banned women from participating in the arena, claiming that the spectacle of women fighters showed a lack of respect to women in general. Interestingly, he was also concerned that women might become motivated to train as athletes and want to take part in the Olympic games, which he found threatening to the social order.  Chances are good that the two issues were related in his mind.

Despite his opinions on the subject, women were still found in the arena in the following century. There was an inscription found in the city of Ostia which documents it, although it says that mulieres, not feminae, participated (women, not ladies).

Whether or not it met with Severus’s approval, there is no doubt that a certain number of women of all classes of Roman society chose to throw off convention and enter the arena as female gladiators, making them heroes in more ways than one.