Gender Revealed of “Hand-Holding” Skeletons Buried Together 1,500 Years Ago

When two skeletons, dubbed “the Lovers of Modena”, were discovered in northern Italy ten years ago, hand in hand, it caused intense interest into the identities, reasons and nature of the relationship between the skeletal hand-holders. At the time researchers could not determine the sex of the skeletons because they were badly preserved and technology at the time wasn’t capable of assessing their identities. But it was assumed it was a male-female couple, hence the “Lovers of Modena” moniker given to them.

Now however times and technologies have changed and a new technique, using the protein on tooth enamel, has at last revealed their sex. And they’re both male. While this has caused intense interest and speculation, especially regarding the possibility of these skeletons being a homosexual couple, the exact relationship between the 4-6th century AD skeletons still remains a mystery. What is known however is that the two adult males were intentionally buried hand-in-hand. 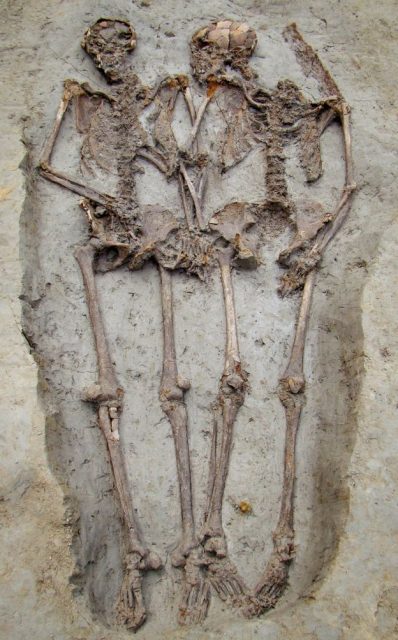 The “Lovers of Modena” skeletons. Photo by ARCHEOMODENA

University of Bologna researchers have theorized that the two men were buried holding hands possibly due to a fraternal or military connection. Perhaps they were brothers, close friends, or battle-hardened comrades. Or indeed lovers. The jury is still out in this regard.

Although the remains were discovered 10 years ago, as was said researchers were unable to confirm the gender of the remains because of the poor level of preservation. Usually, the shape of pelvic bones gives scientists an almost instantaneous idea of whether a skeleton is female or male. And so, at the time, because they are clearly holding hands, they received the sobriquet of “lovers.” Now, the fact that they are both male that name is taking on an entirely new life. 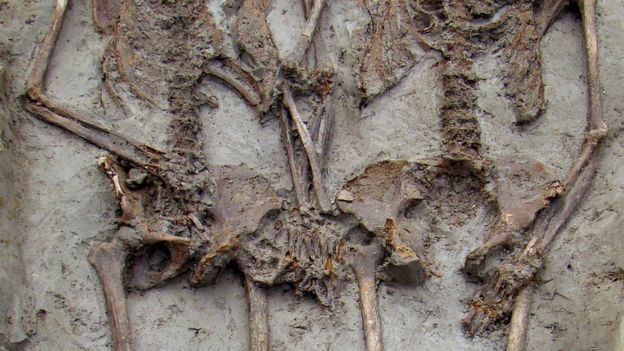 Close up the skeletons placed hand-in-hand. Photo by ARCHEOMODENA

Nonetheless, the leader of the team of scientists at the University of Bologna, who spoke with the Italian news service Rai, Federico Lugli, said that the men had been lying hand in hand for about 1,500 years. He also speculated that their graves may prove to be part of a larger burial site, perhaps a cemetery for soldiers. He opined to Rai News, “the two men may be siblings, or cousins, or soldiers who died together in battle.” (Lugli was originally quoted in Italian; his remarks were translated by the BBC.)

Yet in spite of whatever disquiet the revelation has caused (it has received much press around the globe,)  the technique used to confirm their gender is what’s truly significant.  It is a revolutionary examination of tooth enamel that allowed the scientists to confirm their gender. The team published a paper in Scientific Reports recently on the methodology they followed when examining the remains. 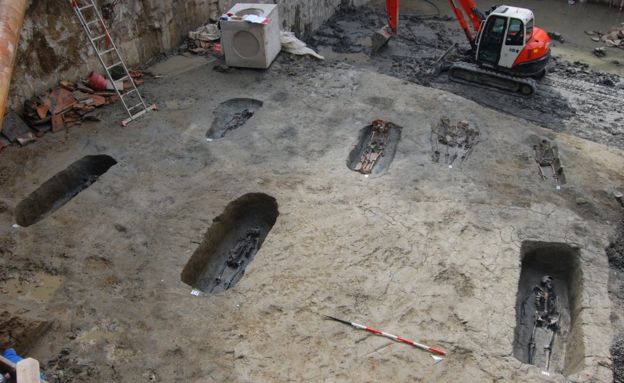 The burial site, which many believe was an ancient war cemetery. Photo by ARCHEOMODENA

“Recent work has disclosed the critical role played by enamel peptides in sex classification of old skeletal remains,” begins the paper. The writer goes on to insist it was the public and the press who sped to conclusions about gender. “…the so-called “Lovers of Modena,” two late antique individuals…were intentionally buried hand in hand. Upon discovery, mass media immediately assumed they were a male-female couple.” In other words, academics are far less likely to jump to romantic conclusions until all the facts are in.

Men going to their graves holding hands is nothing new. A recent article in the Guardian cites the example of the “Lovers of Valdaro,” two 6,000-year-old skeletons found in Mantua, one of Italy’s northern provinces. Others have been found in places like Siberia, and Turkey.

Related Article: Prague Castle Skeleton Identified that was used for Both Nazi and Soviet Propaganda

However, Lugli confirmed to Rai News service that “there are currently no other examples of this type.”

Exactly why the “Lovers of Modena” were placed in their graves holding hands will never be known with absolute certainty. But Lugli leans toward the idea of a military bond between the men, and that they are part of a larger war cemetery. This indeed could be likely, but a more romantic notion of their position is also something that can’t be ruled out.