A Viking inscription on a silver armband from the famed Galloway Hoard has been found to contain an Anglo-Saxon name. The implications of this are many and great.

In 2014  a gentleman out on his regular scouring of empty land came upon what turned out to be a treasure trove of ancient Viking jewelry and other objects. Experts said the collection was buried as far back as 1,100 years ago.

The collection, called the Galloway Viking Hoard, is comprised of more than 100 rings and other valuable artifacts, many inscribed with symbols that, until recently, mystified experts. National Geographic notes that the treasure included ornamental silks, gold jewelry, and silver brooches as well as silver Viking armbands inscribed with runes.

The Galloway Hoard was acquired by the National Museums Scotland (NMS) in 2017, which described it as “the richest collection of rare and unique Viking-age objects ever found in Britain or Ireland,” NMS notes that most treasure finds include just a few types of objects. This hoard is unique in that it contains a vast array of items including rock and crystal amulets, Anglo-Saxon disk brooches of a type never before found in Scotland, and two quatrefoil brooches that are “new” to archeologists.

Vikings came to the British Isles in the late eighth century. They were fierce warriors, looting wealthy monasteries and raiding local villages. Over the next few centuries, several Viking groups conquered areas of England, Scotland, Wales, and Ireland. They settled in communities and, over time, were either vanquished or assimilated into the Anglo-Saxon population. 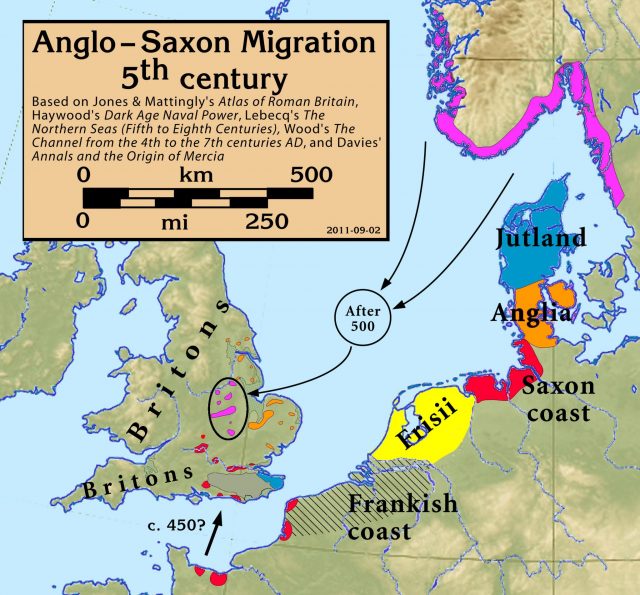 Anglo-Saxon Migration in the 5th century. Image by Notuncurious CC by 3.0

Only recently was the Galloway collection examined by David Parsons of the University of Wales. Fox News reports that he has been able to interpret many of the Viking inscription and symbols inscribed on the armbands, and the information he has gleaned is giving experts new insights into the people who buried the items, their lineage, and their identities.

Parsons explained that runes are inscribed on five of the armbands which were found in a placement indicating they might identify who actually owned and buried that particular part of the two-part treasure. Some of the texts are difficult to decipher; however, one of them is clearly a common Anglo-Saxon name, Eegbeorht, which translates as Egbert.

Who owned the #GallowayHoard?
Research into the Viking-age treasure, supported by @TheGlenmorangie, has uncovered what may be the name of 1 of its owners. Anglo-Saxon runes on a silver arm-ring have revealed the name Ecgbeorht or Egbert.
Find out more at https://t.co/a0L3eiGdAp pic.twitter.com/WUwEhHy7lZ

If the armband marks the treasure, the name and the particular script used indicates that the people who buried it were Anglo-Saxons themselves or somehow connected to Anglo-Saxon culture and familiar with their language and script at the time. They may have been settled in the area and have considered themselves integrated into the local culture.

Adrian Maldonado, a senior fellow with the NMS also believes this new information offers important clues into the area’s Viking past. He notes that the name Egbert was common among Anglo-Saxons and wonders what that may mean regarding the Viking period of Scotland’s history. It’s possible that some local people actually raided either on their own or with the Scandinavians. He also hopes that, as further study narrows the dates and names associated with this hoard, experts may be able to connect the treasures with specific historical figures.

BBC News reports that, in 2020, the Galloway treasures will go on display in Edinburgh and will travel to Kirkcudbright, Aberdeen, and Dundee before returning to their permanent home in Edinburgh.

This hoard is not the first Viking item or inscription found in Scotland that has excited historians and archaeologists, according to Fox News. In the past, Viking “boat graves” have been discovered, and once, on a remote island off the coast, a drinking hall was uncovered. Clearly the Vikings had a distinct and strong link to various regions of Scotland, and much information about that link remains unexplored.

To researchers like Maldonado and Parsons, that’s where the fun lies. The collection now owned by NMS is invaluable, not only in monetary terms, but in terms of historical richness yet to be revealed.