The name Caroll Hall Shelby, whose story is hitting the big screen in the movie Ford vs. Ferrari, is synonymous with the American muscle car. Born on January 11, 1923, in Leesburg, Texas, he was the son of a mail carrier with a fondness for driving fast.  He joined the Air Force at the age of 18, and married his wife two years later, according to Motor Trend.

After the second world war he left the military and first started a dump truck business, but moved on to becoming a chicken farmer by 1949.  The farm started out promisingly, and his first batch of chickens turned a nice profit, but he went bankrupt when the second batch he was raising succumbed to disease. 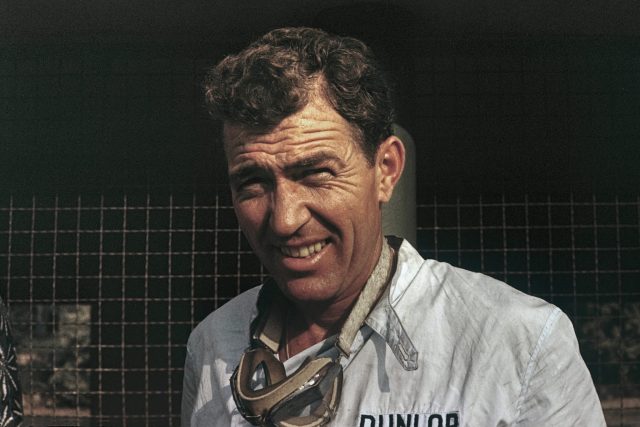 In 1952 he began yet another new career, this time as a racecar driver.  He spent the eight years driving in races both at home and abroad.  Two years into his time as a racer, he impressed the manager of the Aston Martin team so much that he was invited to co-drive one of their vehicles at Sebring, and he accepted.  He further ended up being invited to drive for the team at Le Mans that April, and he spent the rest of the summer racing Aston Martins in Europe. 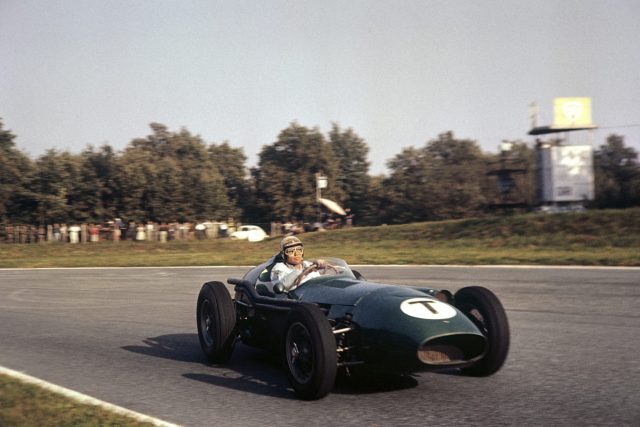 He returned to the US in August, after Daniel Healey, of Austin-Healey invited him to help set 70 new speed records in Utah.  That November he raced an Austin-Healey in Mexico and had a serious accident, flipping the vehicle four times.  Undeterred, he was racing again four months later, wearing a special fiberglass cast and taping his hand to the steering wheel.  He continued racing until 1960, when he ultimately retired as a result of problems with his heart.

Wanting to continue his involvement in the auto industry even if he wasn’t racing any longer, he began two new enterprises, a high-performance driving school and Shelby-American.  Shelby-American was small auto shop invested in the idea of melding powerful American V8 engines with a body reminiscent of European sports cars.  According to one biographical source, he had a dream about seeing the word ‘cobra’ on the front of one of his project cars, and he wrote it down for future reference.  The idea of the Shelby Cobra was born. 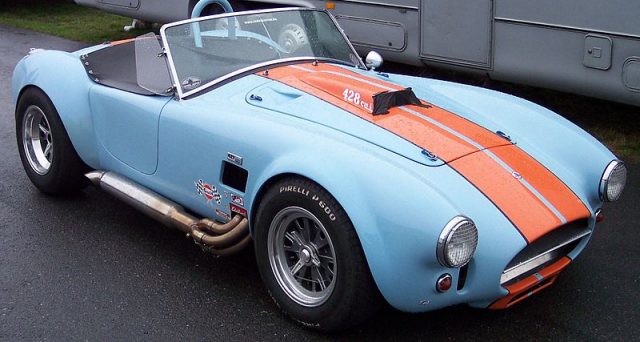 Shelby approached AC Cars of Britain and Ford Motor Company to help him make his idea a reality.  AC Cars fabricated the body for his vision, and Ford implemented the engine and transmission.  The new Shelby Cobra started proving its chops on the racing circuit over the next two years, competing with better-establish vehicles like corvettes and Ferraris.  It was the beginning of Shelby’s time as an auto designer.  He refined his ideas, making the body longer and wider, and the Shelby Cobra 427 became the ultimate American-made sportscar. 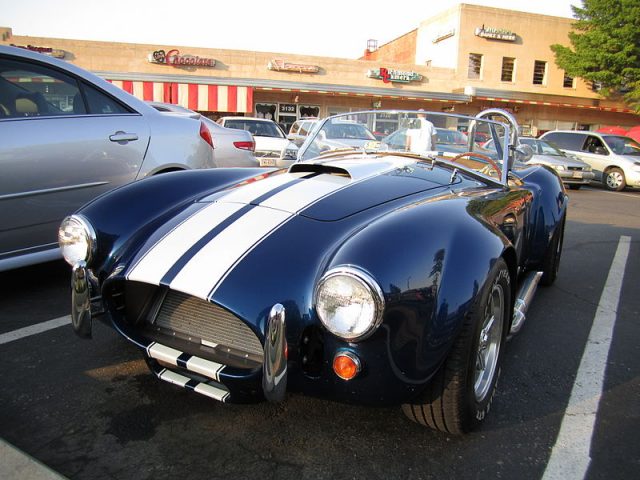 Ford Motors was so impressed with the 427 that they asked Shelby to help them improve their Mustang and bring it to the same level as the Cobra.  In the spring of 1965, Shelby’s team had developed the Shelby Mustang GT350, with versions for both racing and street use.  That first design led to several other versions of the Shelby Mustang, the GT350H, the 500, and the 500KR. 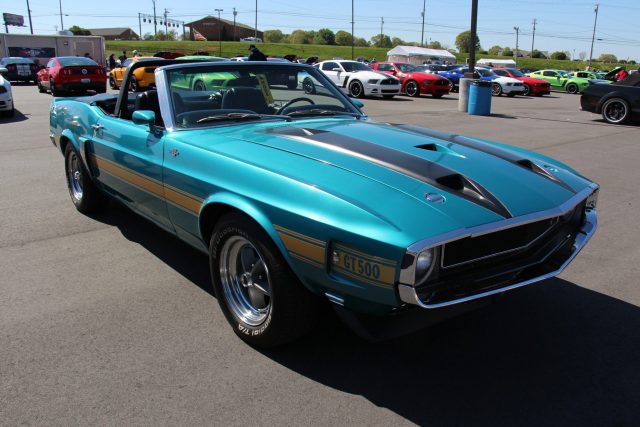 By 1969 sales of the new Mustangs were dwindling, however, and the partnership between the two companies dissolved, along with their race agreement. After the partnership with Ford ended, Shelby was a bit at loose ends.  He left the states, moving to South Africa in the mid-1970s and experimented with some new, non-automotive ventures, but it wasn’t as satisfying. 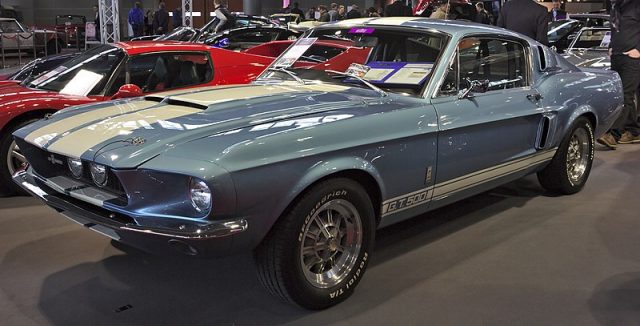 In 1982 he was contacted by Lee Iacoca, who had left Ford and was encouraging Shelby to work with Chrysler, instead.  The emphasis would be particularly on the Dodge brand.  Shelby started working on modifying several Dodge models, including the Charger, and other Dodge vehicles started using parts that Shelby had adapted.  The peak of his relationship with Chrysler occurred with the development and release of the Dodge Viper in 1991, which was an updated re-imagining of the Cobra. 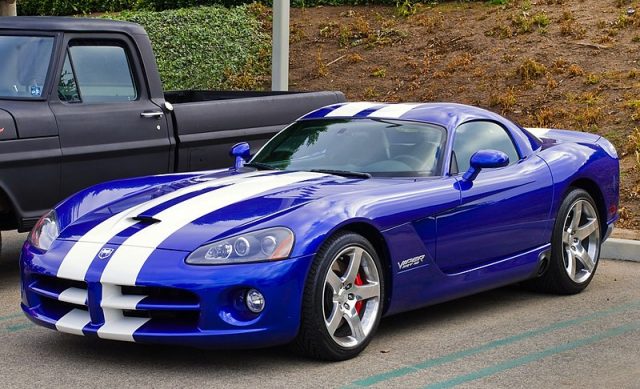 In the middle of his work on the Viper, however, his health issues again became prominent.  It was determined that he would need a heart transplant, and although his illness dept him from being involved in the Viper project in a hands-on way, he still provided input on the project.  After his transplant he even drove a Viper at the Indy 500, at the age of 68. 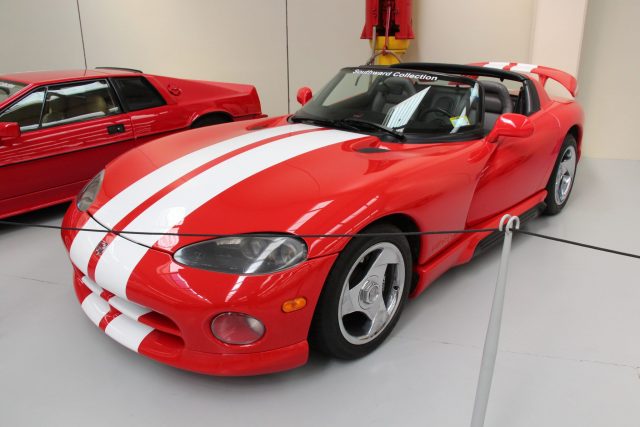 In the earliest years of the new millennium, Shelby and Ford came together again, and he consulted on the designs for the newest Ford GT.  During this period, he took Shelby American public, and Caroll Shelby International and Shelby Automobiles.  The latter company spun off an auto parts company, which produced parts for the Shelby Mustang.

Various other auto-related companies followed. By the time he was in his late 80s, declining health forced him to become much less active in both his production companies and his roles consulting and advising, but his interest in high-performance vehicles never waned.

Related Article: The Shady Origins of the VW Beetle and why They’d Prefer not to Talk About It

He finally passed away on May 10, 2012, not long after the fiftieth anniversary of the original Cobra, having left an indelible mark on the world of cars and racing.

« Groovy Color Images of Hippies at Woodstock 1969 put you Right There in the Mud
Head for the Hills! The Most Hilarious Sci-Fi Movie Posters of the 1950s »