The Icelandic answer to Santa is sure to put a chill in people’s bones! Grýla, also referred to as “the Christmas Witch”, has a colorful and gory history.

Krampus’s sour seasonal antics may have gotten their own movie but some think Grýla would do equally well as a horror villain. She’s been known about since roughly the 13th century, when tales of her exploits spread via word of mouth. The name Grýla translates as “Growler”, making her even scarier.

Smithsonian quotes a historic passage about the tinsel-hating troll: “Down comes Grýla from the outer fields / With forty tails / A bag on her back, a sword in her hand, / Coming to carve out the stomachs of the children / Who cry for meat during Lent.” Certainly a contrast to “Sleigh bells ring, are you listening?” 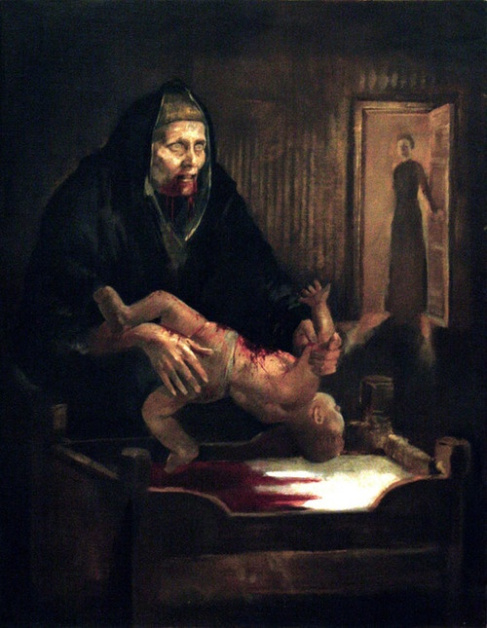 Depiction of Gryla the Christmas witch

Actually she didn’t become associated with Christmas till several centuries later, when the idea of a rampaging witch punishing naughty children fused with the yuletide atmosphere. Jól (Yule) is the title often given to an Icelandic Christmas. Smithsonian describes this ancient take on the festival as “a time not only to bring together relatives, living and deceased, but also elves, trolls and other magical and spooky creatures believed to inhabit the landscape.” Grýla definitely fits into that category. She’s called an “ogress” by some, though presumably not to her face. 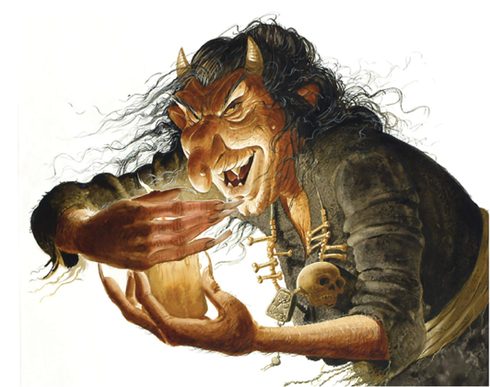 Speaking of her face, what exactly does she look like? Accounts, such as they are, vary. “One rhyme says she has 15 tails, each of which holds 100 bags with 20 children in each bag, doomed to be a feast for the troll’s family”, according to Mental Floss, who highlight the bleak yet mind-boggling folk history.

Poems “describe eyes in the back of her head, ears that hang so long that they hit her in the nose, a matted beard, blackened teeth, and hooves.” Safe to say, should an unlucky reveller run into Grýla, they wouldn’t forget her in a hurry.

#Gryla — the perfect person to keep your kids from being naughty this holiday season. 😧 pic.twitter.com/ZPAEKwGm5c

Is this seasonal savage really so different to the mortals she preys on? There’s a case that she isn’t, as evidenced by her family. For starters someone agreed to marry this twisted creature! She “comes down from her cave in the mountains to gather up ill-behaved kids for her and her lazy and browbeaten husband Leppalúði to make into stew”.

And Leppalúði wasn’t the only man to slide a ring onto that wizened finger. “She ate one of her husbands when she got bored with him,” reveals Terry Gunnell of the University of Iceland, talking to Smithsonian.

Then there are the Yule Lads. This bizarre band of brothers existed in their own right to begin with. Gradually however they were incorporated into Grýla’s legend, to form a clan of child catchers and festive buzz killers. Gunnell thinks of them as “looking like aged Hell’s Angels without bikes”. There was a Santa-oriented makeover, but the grittier approach appears to be taking hold again in the Icelandic consciousness. 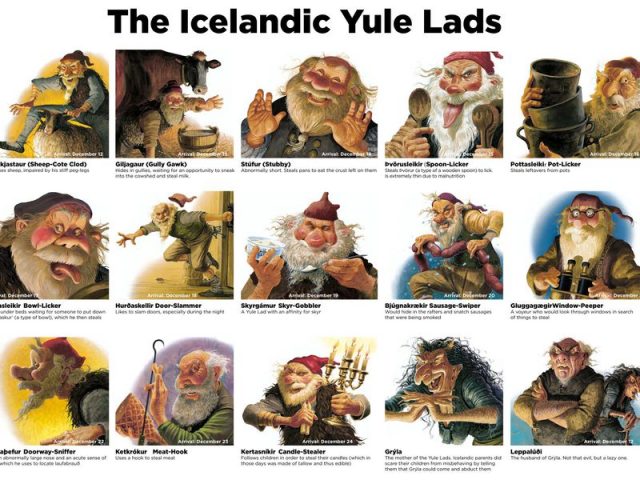 The fearsome fam even have pets. Lovers of felines may be surprised to hear about the Jólakötturinn, or Yule Cat. Seems there’d be one hell of a flap to accommodate this malevolent moggy!

Merriment aside, institutions such as the National Museum view Grýla as an essential part of Iceland’s cultural history, one that can be easily forgotten about with all those baubles and “yo ho ho”s. And even though America loves Saint Nick, a TV show recently brought the amoral antics of the Christmas witch to life.

Related Article: Krampus the Christmas Demon – What is it and Where did it Come From?

Netflix’s Chilling Adventures of Sabrina included her in the special episode A Midwinter’s Tale. This saw the Yule Lads arrive in Greendale, with the literal mother from hell on hand to rein them in. Billed as Grýla’s first ever appearance onscreen, the role was played by Heather Doerksen.

She’s a menace to society at Christmas, yet it’s clear without the likes of Grýla the holiday season would be a bit too sickly to bear.