The Green Vault holds a fortune in priceless treasures, and burglars just got away with some of them. Centuries ago, the Residenzschloss was a royal palace in Dresden, Germany, now it’s a state museum. The museum is home of what’s known as the Green Vault, a set of eight ornately-decorated rooms, some of which are decorated with the malachite-green paint which gives the vault its name.

According to a BBC report, last week, thieves broke into the museum and stole three sets of diamond jewelry from the museum’s collection.

The Green Vault held ten sets of jewels, including the three which have gone missing.  The collection had originally been put together in about 1723 by Augustus the Strong, who was first an elector of Saxony, and later became King of Poland. Each of the missing sets consists of about 37 pieces of jewelry and contains sapphires, emeralds, and rubies in addition to the diamonds. 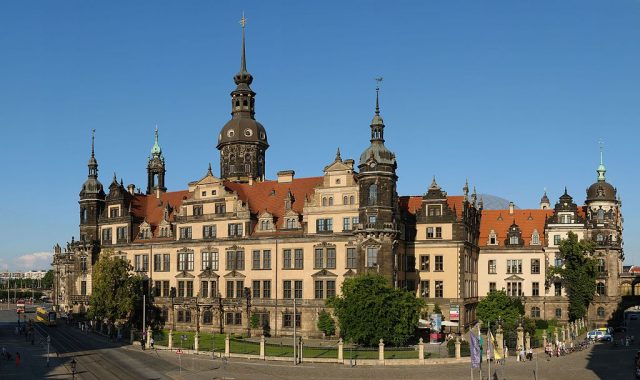 The jewels that were taken are far too unique and well-known to be sold intact, and police and museum officials are concerned that the sets will be broken up to facilitate their disposal.  The cash value of the sets is very high, with their worth estimated in the hundreds of millions or even up to a billion euros. According to Marion Ackermann, the head of the museum, their cultural value is beyond calculation. 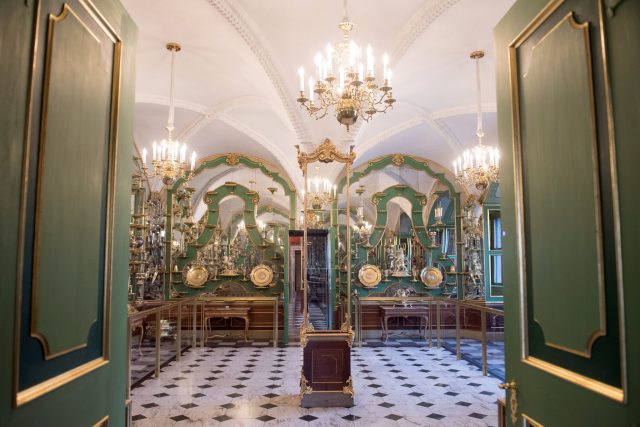 The thieves entered the vault by breaking a window and security grill.  The theft happened very quickly, taking just a few minutes, and security footage shows that the thieves specifically targeted three display cases in the jewel room.  NPR posted footage from the surveillance video, in which two figures dressed in black and carrying flashlights use hatchets or small axes to smash open the beautifully-made cases to get to the jewels.  Ms. Ackermann said that the museum staff were ‘shocked at the brutality of the crime.’ 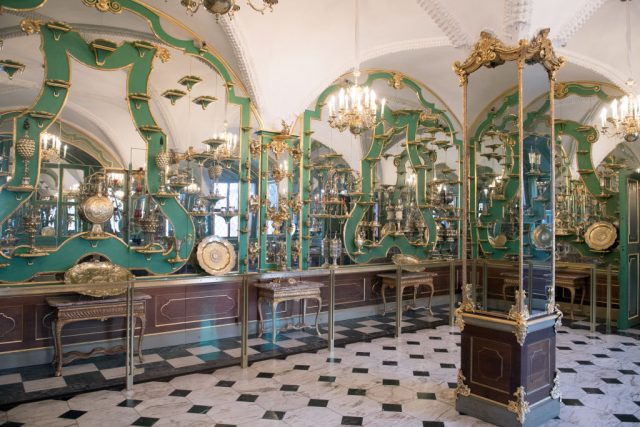 Saxony’s Art Minister, Eva-Maria Stange pointed out the jewels are essentially the crown jewels of the Saxon kings, and the Minister-President, Michael Kretschmer, said that the theft represented a crime against the people of Saxony.  He further pointed out that the state had amassed the collection slowly over the course of centuries, and it represents an integral part of Saxony’s history. 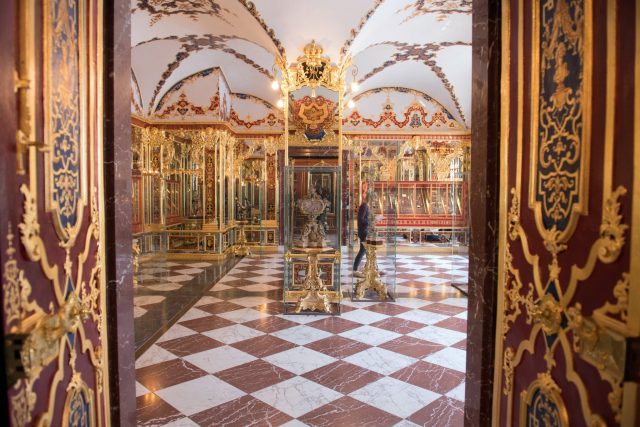 Another room in the Green Vault. Getty Images

The evening after the theft, police released some information about the jewels that were taken.

Some of the missing items include a hat clasp that has one 16-carat diamond and 14 other large stones, as well as over 100 smaller diamonds, the diamond-encrusted breast star of the Polish Order of the White Eagle, and a diamond-laden sword hilt that has nearly 800 small diamonds and nine larger stones, with a matching scabbard. 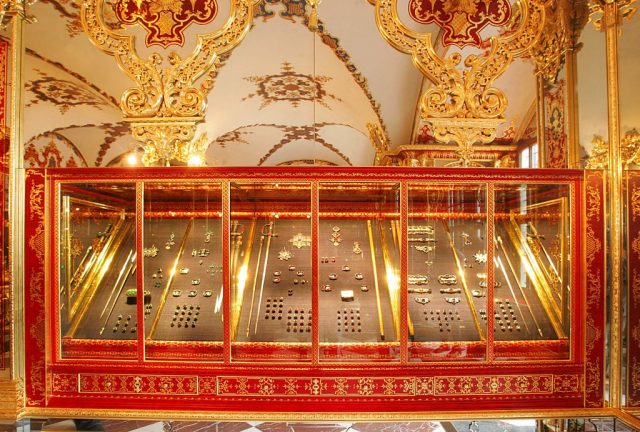 Treasures inside the Green Vault. (Photo by Momentphoto/Ronald Bonss/ullstein bild via Getty Images)

The police have put together a special commission to investigate the crime.

The good news is that one of the most well-known treasures from the museum is safe.  The Dresden White diamond is 41 carats, which would make a tempting prize, but the stone is currently on loan to the Museum of Art in New York City.

While law enforcement is still working out exactly what happened, there are the beginnings of a timeline.  The police believe that the burglars fled the scene in an Audi A6, and that later on the same type of car was found burning in an underground parking garage.

As for the chain of events, the local police received a call about the break in just after five in the morning, local time.  Less than a minute later, a report was made about the escape vehicle, causing officers to begin a city-wide search.  About the same time as those reports, there was another report, this time of a good-sized power outage in the area of the city where the museum is located.

Not long after the outage was reported, authorities found a disabled electrical control box in the area.  While the police are still trying to figure out if the box was sabotaged, it’s believed that the box may have been disabled as a way of taking down the museum’s security.  It certainly caused the streetlights in the area to go out, which undoubtedly made it easier for the criminals to escape.

There hasn’t been any new information about the status of the investigation yet, but the police have offered a half-million-euro reward to anyone who can steer them in the right direction, so perhaps it won’t be long before someone comes forward.