‘Humanoid’ Face of Lamb Revealed in Ghent Altarpiece after 500 Years

After careful restoration the true face of the lamb on the Ghent altarpiece has been revealed after nearly 500 years. For centuries, the altarpiece has been considered one of the most influential pieces of art in the Western World.  It’s not a single painting, but rather a series of 12 panels full of interconnected images that are rife with Christian symbolism.  The work was created by Jan and Hubert Van Eyck in 1432.

During the course of its very long life, this work of art has had its share of adventures, having the reputation of being the most stolen piece of artwork of all time, according to the Guardian.  It’s nearly burnt more than once, including nearly being intentionally burned by rioting Calvinists. It’s been forged, taken apart, and censored.

Napoleon stole it, it was hunted through the First World War, and taken and sold multiple times during the Second before being rescued from Nazi hands. One panel was stolen in the 1930s and has never been recovered, although investigations are still open. It’s even been ‘updated’ and painted over. 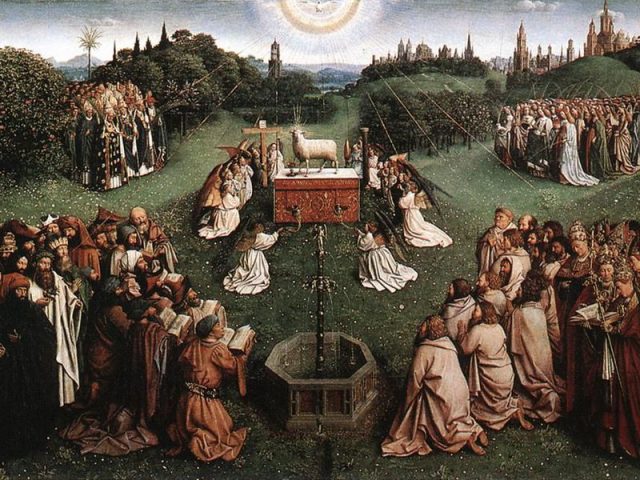 The Ghent Altarpiece’s Adoration of the Lamb panel

The largest, central panel of the Ghent altarpiece is known as the Adoration of the Lamb.  Unsurprisingly, it features a lamb atop an altar, surrounded by adoring masses.  According to Smithsonian, the lamb’s actual face was changed in a re-paint job and hidden from public view for about the last five hundred years. 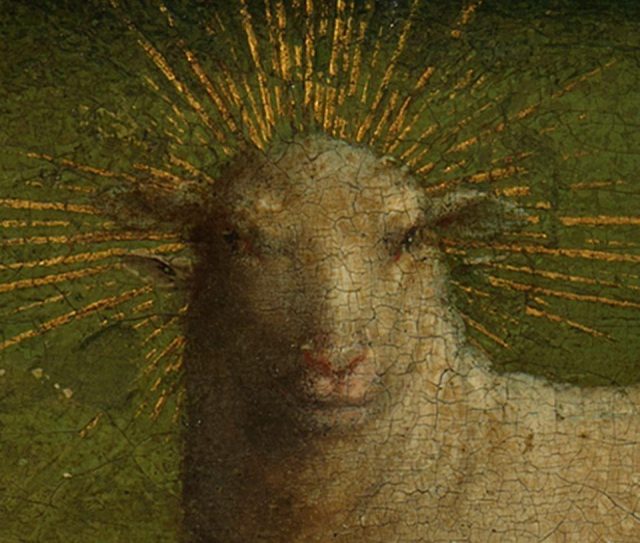 The lamb’s face as it had appeared for the last 500 years.

In the original Ghent altarpiece, as painted by the Van Eyck brothers, the face of the lamb doesn’t entirely match the style used in the rest of the painting.  Instead of the very natural style of the rest of the piece, the lamb’s face does not look like faithful reproduction of what a lamb’s face would look like.  The eyes are large, open, and face more fully-front, with a direct and intent expression.  It also has full, pink lips and the nose is somewhat flared.  The features, together, give the face a distinctly more human look. 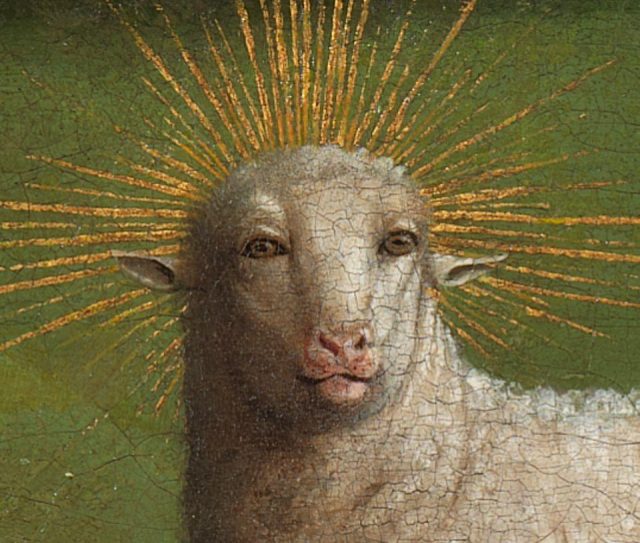 That unsettlingly human expression may be what as behind it when a second set of artists modified the original piece in 150, more than a century after it was first rendered.  Although the work was ostensibly to touch up the work, which had suffered from some deterioration as a result of spending more than 100 years hanging in St. Bavo’s Cathedral, in Ghent, Belgium.  After the overpainting was done, however, the lamb’s face looked much more like an actual sheep’s, and was much more ‘neutral’. 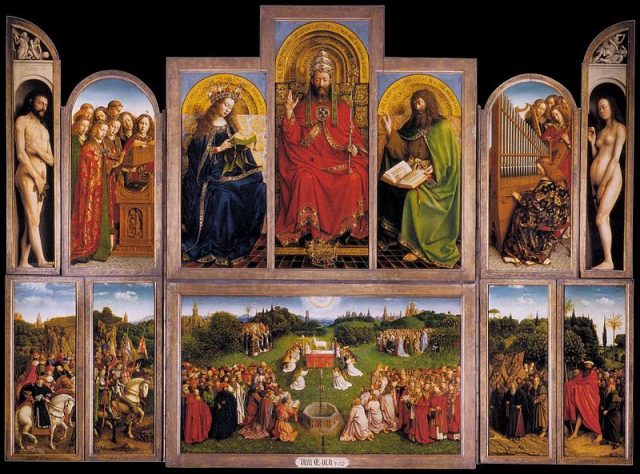 Over the centuries, no one realized about the changes that had been made, until the Royal Institute for Cultural Heritage allocated nearly two and a half million dollars into having the painting fully restored, and the process of carefully removing the top layer of paint was under way.  The second phase of the work, done in 217, uncovered the true face of the lamb.

The lamb’s eyes weren’t the only things that were altered in that long-ago overpainting.  As the restoration continued, it was discovered that nearly three-quarters of the work had had some alterations.  The alterations weren’t necessarily radical, either.  In one example, several buildings in a panel were obscured and painted over with a blue hill.

The final phase of the restoration hasn’t begun yet, so it’s hard to say what else may be uncovered by the time the work is finished.  What the purpose of the changes was is, of course, a matter for speculation.  It could have been that the Church didn’t feel that the original version was entirely appropriate, or it may simply be that the artists who did the overpainting felt they could do a better job than the Van Eyck’s, or just wanted to leave a more personal mark on the famous work of art.

In the meantime, until the entire restoration is complete and the altarpiece is returned to St. Bavo’s Cathedral, visitors to Belgium can visit Ghent’s Museum of fine Arts, where the piece is presently on display, and have the opportunity to see the work as its creators originally intended.

« 50% Chance Notre Dame Cannot be Saved says Cathedral Representative
A Year of Breakthroughs: What 2019 Taught us About Human Evolution »