Check out the biggest Iron Age coin hoard on record! This ancient discovery gives new meaning to the expression “small change”. Guinness has verified Jersey’s 69,347 coins – collectively named Catillon II – as a world-beating find. It happened in Jersey, largest of the Channel Islands, back in 2012 and has only now been recognized.

2 metal detectorists, Reg Mead and Richard Miles, tracked down the hoard on the eastern side of the island. Their search was far from brief, lasting an amazing 3 decades. It’s thought Catillon II, found a little over 3 ft under the soil, dates to around 50 BC.

Mead and Miles first heard rumors about the stash of shrapnel via the daughter of a local farmer, according to the website for Jersey Heritage. “As a child, she was given ancient coins found by her father in a field as he turned the soil to plant potatoes,” the site says. “Not knowing what clues these coins held to finding the world’s largest ever Celtic coin hoard, the little girl swapped them for comics!”

A hoard of Iron Age coins worth up to £10 million was found after two detectorists’ were tipped off by a woman who spotted a ‘shiny button’ in a field https://t.co/IyzLJ0KcxN

Catillon II is believed to be worth £10m (a little over $13 Million). Not bad for 30 years’ work, but in a centuries-old twist the Crown are the hoard’s official owners. Each coin had to be removed separately, with experts working for Jersey Heritage, Société Jersiaise and Guernsey Museum spending 3 years on the job. Part of the find has been on public display at La Hougue Bie Museum.

Miles described the day their plan finally came together to BBC News in 2017. Rumor had it “the pot had been discovered on the tree line and we saw on old maps an old boundary that had been taken out.” He “found the first coin – and by the end of the first day we found 20 coins. Gradually, the tally began to climb.” 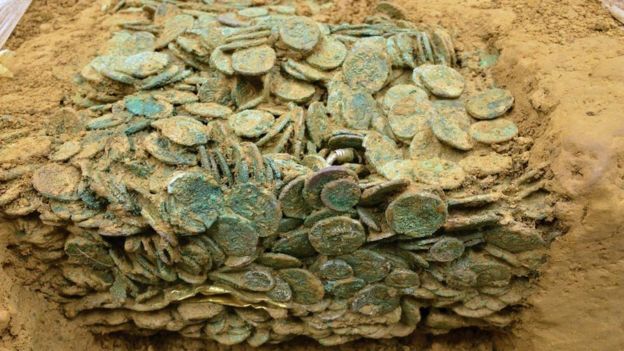 The coin hoard found, which is officially owned by the Crown. Photo: JERSEY HERITAGE

The BBC notes that in addition to coins there were “a large number of gold neck torques and other pieces of jewellery, as well as glass beads, a leather purse and a woven bag of silver and gold work.”
Who hid the hoard in the first place? No-one is entirely sure but one group were almost certainly a driving factor – Romans. BBC writes the coins are “believed to have been buried by the Coriosolitae tribe of Celts as they fled from the invading forces of the Roman Empire.”

The assumption is Celts hit the water in a dangerous mission to protect their riches. Jersey Heritage writes that they “sailed across the sea to Jersey, navigating the Island’s treacherous rocky coast” in order to find a suitable hideaway. “Although we don’t yet know exactly when the hoard was hidden,” they add, “it is likely to have been during this turbulent period of history, and it remained buried deep in the ground until it was discovered more than 2,000 years later.”

Catillon II trumps previous record holder Cunetio from 1978. While its tally of 54,941 copper coins from the 3rd century BC was good, Jersey have gone one better. Still, it took over 40 years for determined dirt shovellers to take the next step.

Jersey Heritage’s curator of archaeology Olga Finch thinks the find is good for the island as well as understanding the history behind Iron Age trade. Speaking to the BBC she said she was “delighted that such an impressive archaeological item was discovered, excavated, examined and displayed in Jersey”. Finch believes the hoard “demonstrates the world-class heritage that Jersey has to offer.”

If it wasn’t for the perseverance of Mead and Miles, the hoard wouldn’t have been found at all. In an echo of British sitcom Detectorists, they’re showing that searching for buried treasure is more than just a curious hobby, and can yield fascinating and record-breaking results!