On the beach in Plougastel-Daoulas in Brittany, France lies a three-foot tall boulder carved with an inscription in an unknown language.  It sits in a cove near Illien ar Gwenn, and passers-by can only see it at low tide.  The stone has about 20 lines of words incised on it, and although the inscription has been known for years, no one had been able to translate it into a comprehensible meaning, according to a report by the BBC.

What made the inscription so difficult to translate is that it was posed of a mix of languages and influences.  Although it was mostly written in Breton, the language carried to France by Celts during the medieval era, it also possessed letters that were written upside down and backwards.  There were even a few Scandinavian-style O’s just to keep things interesting.  The inscription bears two dates, 1786 and 1787, which were only a few years before the onset of the French Revolution.  In addition to the writing, the stone was also carved with the image of a heart surmounted by a cross, and a ship with a rudder and sails.

None of the language experts or archaeologists who looked at the inscription could figure out exactly what it said, and many believe that whoever wrote it was on semi-literate, spelling out the words the way they sounded to the writer.  Lacking a better means to figure out what the boulder had to say, the town of Plougastel decided to hold a contest with a cash prize to see if that would draw it he attention of someone who could decipher the inscription.  To that end, they opened the contest in May of last year, offering a prize of about $2,200 to the winner.

Smithsonian magazine just reported that the contest has finally been won. 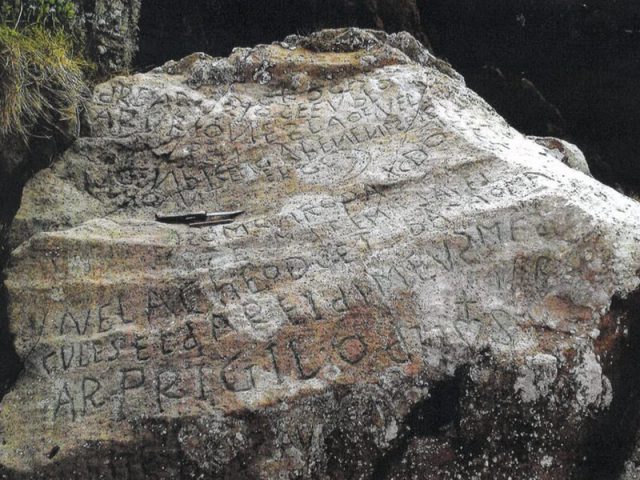 The mysterious inscription on a boulder which awarded a cash prize to decipher it. (Mairie Plougastel / Plougastel City Hall)

The inscription was figured out by Noel Rene Toudic, an expert in Celtic languages, and a team composed of a comic artist named Alain Robet and a writer named Roger Faligot. Both suggested the writing was a memorial to a man who had died there, and was written by someone who cared for him.  Although there is agreement on the gist of the message, the winners varied on the exact details of both the manner of the man’s demise and the writer’s relationship to the deceased.

Toudic posits that the inscription was written by one soldier about another, who was lost at sea.  His translation says that Serge Le Bris, who had small skill with boats, perished when the boat he was towing was overturned by the wind.  The message was signed by Gregoire Haloteau, and dated May 8, 1786.

The team of Faligot and Robet had a different interpretation.  They believed that the deceased met an end by means of foul play.  Their proposed translation praised him for his courage and zest for life, then said he had been struck down somewhere on the island, and succumbed to his injuries.

During the period of time indicated by the dates carved on the rock, a fort in the area was undergoing renovation.  It’s been speculated that the person who carved the message may have been one of the people who were working at the site, because the inscription would have taken some time to carve, according to the town’s historical site manager.

The town set up a seven-person jury to sort through contest submissions, of which there were more than 60.  Most of the entries came from somewhere in France, but there were translations coming from Thailand, the US, the UAE, and Belgium, as well.  That jury went ahead and named the two winners, who will be splitting the prize between them, although the job isn’t completely over.

In addition to the details of the inscription still being hazy, about one-fifth of the text remains untranslated.  Even though the mystery hasn’t been completely solved, the stone remains in its original location.  Locals plan on researching the names of Serge Le Bris and Gregoire Haloteau to see if there are any records that support that translation.  They also want to make the boulder more accessible for both historians and the general public, as well.