Richard Wayne Penniman, aka “Little Richard”, has passed away aged 87. The rock and roll pioneer, known for his stunning stage performances and catchy tunes, had a brief time at the top. Yet his trail-blazing presence influenced the best of the best.

Born 1932 in the city of Macon, Georgia, Richard’s father Bud was a brick mason, bootlegger, church deacon and nightclub owner. Mother Leva Mae was active in the church. Gospel music formed Richard’s musical foundation and Christianity guided him right to the end. “He became ‘Little Richard’ when he about 15 years old,” Rolling Stone writes, “when the R&B and blues worlds were filled with acts like Little Esther and Little Milton; he had also grown tired with people mispronouncing his last name as ‘Penny-man.’”

RCA signed him in 1951. But it wasn’t till 1956 that Little Richard burst on the scene with ‘Tutti Frutti’. Several years of hard graft led to that moment. Legendary lyric “A-wop-bop-a-loo-bop-a-wop-bam-boom!” came to him whilst washing dishes rather than strumming guitars. He made an immediate impression with “his simple, pumping piano, gospel-influenced vocal exclamations and sexually charged (often gibberish) lyrics” according to Rolling Stone. Then there was his striking look – a pompadour, make up and suits so sharp they cut listeners’ ears. 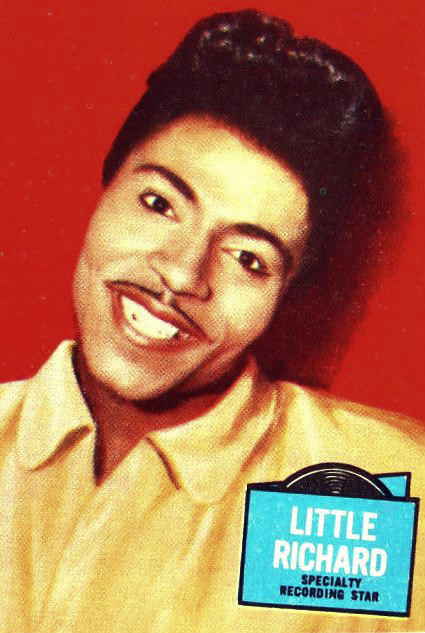 Trading card photo of Little Richard In 1957, Topps cards issued a series of celebrities. He was part of their recording stars cards.

For Richard, he was the star of his own life and seemed to love it. The BBC quotes him from a 2008 interview: “I was the biggest head of all, and I still have the biggest head… I did what I did, because I wanted attention. When I started banging on the piano and screaming and singing, I got attention.” He reportedly referred to himself as “the Magnificent One”.

The Top 10 played host to such hits as ‘Lucille’ (1957) and ‘Good Golly Miss Molly’ (1958). 1956’s ‘Long Tall Sally’ remains his biggest release, getting to no.6. He also appeared on the big screen, notably in The Girl Can’t Help It (1957) starring Jayne Mansfield. His work was extensively covered by a plethora of artists. 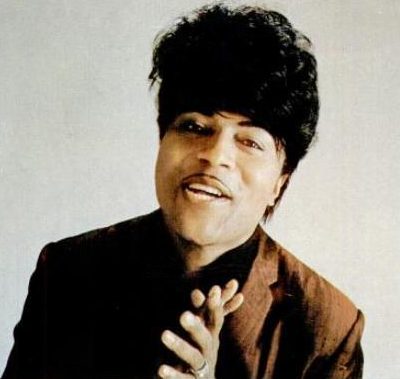 While others made a bigger splash on the hit parade, Little Richard is seen as one of the founders of rock and roll. Some call him the “Architect” or the “Innovator”. Talking to Rolling Stone in 1990, he said this about the musical style that got the world spinning: “I sang it a long time before I presented it to the public because I was afraid they wouldn’t like it. I never heard nobody do it, and I was scared.” When he finally took the plunge it was the start of a career that would sell 30 million records. 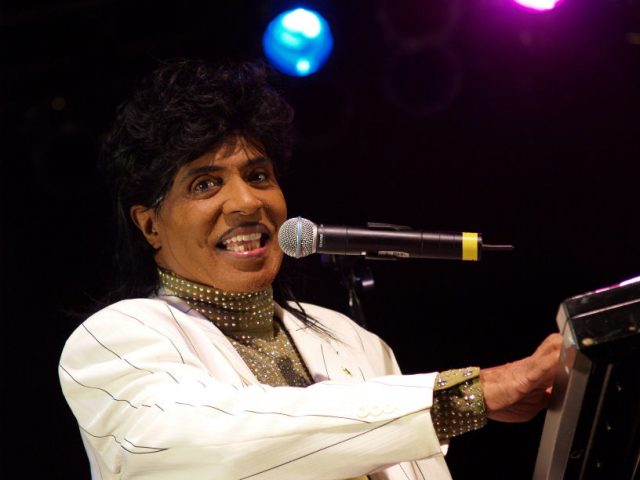 Rolling Stone describes his impact on big acts who were playing at the time. “When Little Richard played the Star-Club in Hamburg in the early Sixties, the opening act was none other than the Beatles. ‘We used to stand backstage at Hamburg’s Star-Club and watch Little Richard play,’ John Lennon said later. ’He used to read from the Bible backstage and just to hear him talk we’d sit around and listen. I still love him and he’s one of the greatest.’” He became a major influence on Prince, joking once that he wore purple before the star of Purple Rain himself.

Richard was popular with both black and white audiences – many saw him as a unifying force. By the close of the Fifties Richard had turned away from screaming fans and looked toward the congregation. This was after receiving a message from the heavens… in fact it was the dramatic re-entry of satellite Sputnik 1. But the fiery spectacle was enough to convince the flamboyant piano pounder to change tack. 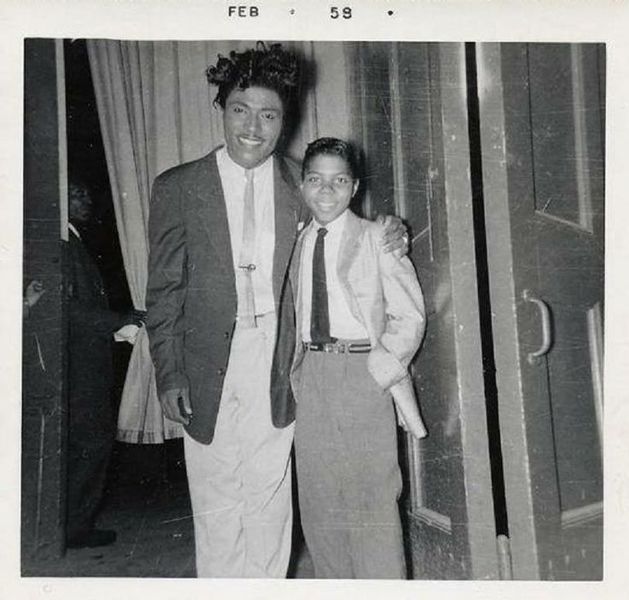 Little Richard and Frankie Lymon in 1958

He returned to the spotlight in 1964, though kept up his association with God. In 1970 Little Richard was ordained as a minister. Celebrities hired him to officiate at their weddings, including fellow musician Tom Petty. “He did yell, ‘Shut up!’ at one point,” Petty told the Chicago Tribune in 2001. “He was really nervous, but so was I. He gave a long talk about love and its characteristics, and what it shouldn’t do. He was pretty inspirational.”

Later decades saw him honored for his immense contribution. The Rock and Roll Hall of Fame inducted him in 1986 as part of their very first class. A Lifetime Achievement GRAMMY followed in 1993. Their website calls him “The Lightning Storm That Awakened Rock”. They also make reference to his fluid sexuality. “A zip code away from his macho peers,” the tribute says, “Little Richard was a rock star that LGBTQ folks could look up to before coming out was the norm, and he galvanized Bowie and Prince to tear up the rulebook of gender expression.”

Little Richard died from bone cancer in Nashville, Tennessee. He came from a large family of 12 siblings. When he passed, Richard was with his brother, sister and son Danny Jones Penniman, adopted during his marriage to Ernestine Harvin between 1959 and ‘64.

Tributes have poured in from around the world. “He will live on always in my heart with his amazing talent and his friendship!” writes contemporary Jerry Lee Lewis. “He was one of a kind and I will miss him dearly.”

“Rest In Peace To One Of The True Creators Of Rock And Roll” tweets Spike Lee. The pair worked together on a commercial. Richard officiated at the union of Bruce Willis and Demi Moore. “Bruce and I were so lucky and honored to have him officiate our wedding back in 1987” Moore says on social media, adding she was “thankful for the memories”.

Related Article: Buddy Holly was the First White Act to Play the Apollo Theater in Harlem

Mick Jagger was another music icon forever influenced by Richard’s performances. Jagger tweets “he was the biggest inspiration of my early teens” and that “When we were on tour with him I would watch his moves every night and learn from him how to entertain and involve the audience”.

“He was my shining star and guiding light back when I was only a little boy” writes Bob Dylan. “His was the original spirit that moved me to do everything I would do… Of course he’ll live forever. But it’s like a part of your life is gone.”