A new high-resolution scan of The Last Supper gives a crystal clear look at the famous painting. Leonardo da Vinci is considered one of the finest artists and thinkers of all time. He created works that have endured for centuries, like the Mona Lisa and The Last Supper, the latter of which is thought to be the greatest depiction of a Biblical scene in all western European art. In it, Jesus and his 12 disciples are eating literally Christ’s last meal, and it was painted as a mural on a wall at a Dominican monastery by the great painter in 1498, in Milan.

But da Vinci chose as his medium a then-new substance, a combination of egg tempera and oil paint, and it was done on plaster. It was cutting edge stuff back then, but he couldn’t have known how quickly the mural would fade, and soon its edges were diminishing, along with its colors. And throughout the centuries, the room the mural adorned was used for a myriad number of things, including a stable by Napoleon. Part of the mural was eliminated when a doorway was built straight through it, essentially chopping out Christ’s feet from it altogether, which can now be seen in this newly-enhanced scan. 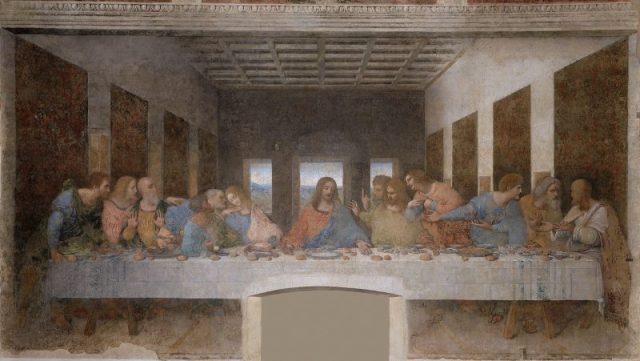 In other words, it took plenty of abuse because of the environment in which The Last Supper was painted. Two of Da Vinci’s students, brothers Giapietrino and Giovanni Boltraffio, decided to ensure the painting’s future by preserving it in a copy, painted between 1515 and 1520. They followed their teacher’s lines and colours, but this time did it in traditional oil paint, on canvas.

It is that painting that hangs today in the Royal Academy of Arts in London, and is what researchers, scholars and others have studied when learning about Da Vinci, and the painting’s importance to European art in general, and religious art specifically. (Or folks can go view the original mural in Milan.)

Now, Google has entered the arena with a scan of the painting, done by Google Arts & Culture. The department reproduced the brothers’ copy of the masterpiece, and in doing so ensured that more than a billion pixels — the little computer “particles” that comprise a picture on screens — make the scan as rich in detail and color as technologically possible. The company recently said that it hopes this work will enable scholars to do even more precise and detailed work on the painting in the future. One can zoom in on a particular part of the image and study it up close, in a way that has previously been impossible. 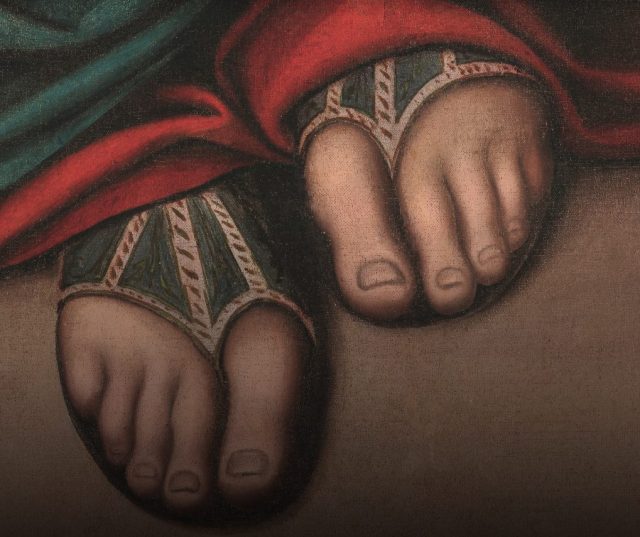 Detail of Jesus’ shoes in the newly-enhanced painting of The Last Supper. Courtesy of Google Arts and Culture.

The scan reveals some details that are easily missed upon casual viewing. For example, there is a knocked over container of salt in front of Judas, the disciple who betrays Christ the following day, and spilled salt was, in Da Vinci’s time, considered a bad omen. No doubt he included it deliberately, in order to be faithful to the Biblical tale he wanted the work to depict. 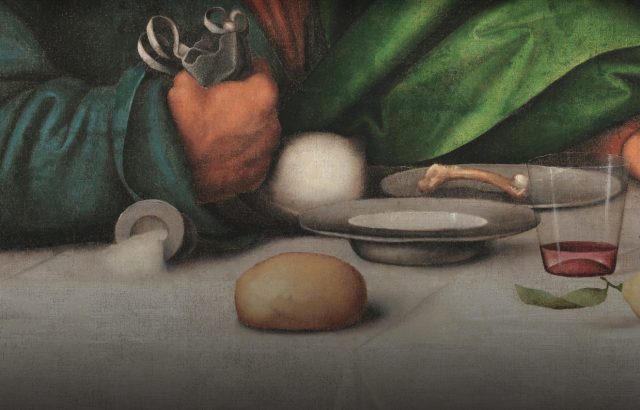 Detail showing that someone spilled the salt. Lloyd Christmas thought spilling the salt was very bad luck. Courtesy of Google Arts and Culture.

Although the Last Supper scan is available to view online and will no doubt be of considerable interest to academics who study Da Vinci and other paintings of his time, the original work in the monastery is a huge draw to scholars and the public alike. The Italian government goes to great lengths to preserve the famous work as much as possible, most recently completing a restoration in 1999.

But since travel is currently difficult, the Google scan just might be an acceptable way to look at the work, at least for now. It may not be like being in the room with the original mural, but viewing art, in any way we can, is always a positive and valuable endeavor. And the time will come, sooner or later, that folks can, in fact, head to Milan to see the real Last Supper. Until then, looking at the scan, which includes all the painting, even Jesus’ once-missing feet, will have to do.

You can see an enlarged version of the Last Supper scan HERE.