Great Britain has officially confirmed its first ever Viking helmet. It was dug up by workmen in the North Yorkshire town of Yarm, back in the 1950s. Only now has the rather rusty Anglo-Scandinavian headgear been analyzed, after years spent in a local museum.

Vikings are amongst the most recognizable images from history. Yet their distinctive helmets are exceptionally rare finds for archaeologists. Research undertaken by Dr Chris Caple of Durham University has revealed what many suspected to be true.

He tested the ironwork on the helmet, believed to be from around the 10th century AD, comparing it with related discoveries to break the news everyone was waiting for. Only one other example of a Viking helmet in such intact condition has been found to date, over in Norway in 1943 and called the Gjermundbu helmet. 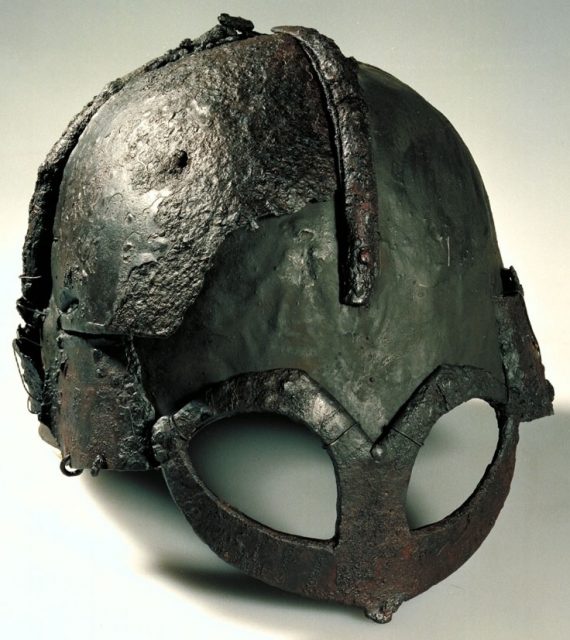 The Gjermundbu helmet. Discovered in Norway in 1943. Photo by NTNU Vitenskapsmuseet CC by 2.0

Archaeology is a dirty business, a fact underlined by how the helmet was unearthed in the first place. The workers were digging trenches for sewage pipes when the armor came to light approx 70 years ago. Its former wearer had been through the wars, and took some punishment in the 20th century also. Preston Park Museum in Stockton – where the artifact has lived since 2012 – notes that “damage to the helmet is consistent with an object being hit by a plough or spade whilst buried.” 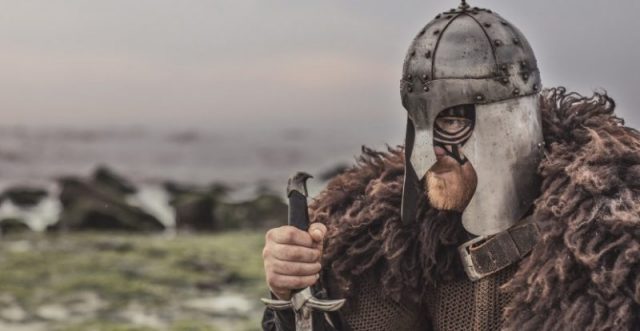 A Viking in his helmet, possibly in Britain.

Writing for the Medieval Archaeology journal, Dr Caple describes the Yarm find as “a composite construction ‘crested’ helmet of riveted, undecorated, thin iron plates.” The noggin-protecting armor was “Without close parallel”, meaning it was tough to find other things to compare it with before now. “This paper records, analyses and reassesses the helmet,” Caple goes on to say, “demonstrating that it is not a later copy, but an original 9th–11th-century helmet”. 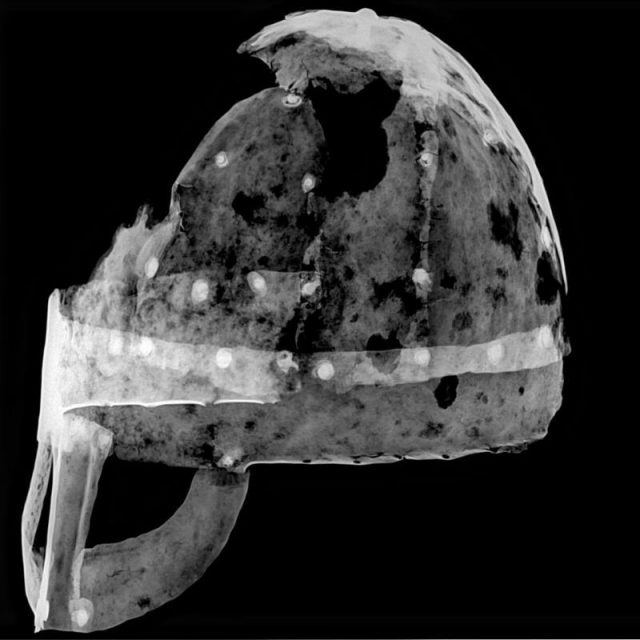 X-ray of the Yarm helmet shows the rivets and overlapping plates of its construction. (Chris Caple / Durham University)

A 16mm thick padded cap lay between the 1 – 2 mm layer of iron and a warrior’s scalp. The overlapping iron plates, plus bands, were topped off with a “knop”, or knob. Adapting Caple’s observations, Preston Park Museum refers to a “spectacle (eye) mask” under the brow band, with holes along the band’s edge suggesting that a “mail curtain” could be added.

For Caple, it’s surprising the helmet lasted the distance. As Preston Park wonders, “how had it survived in the damp earth of the tidal riverbank of the River Tees?” If essential works happened later, the object might have rusted away. Quoted by the BBC, Caple says, “the thin iron sheet is now very susceptible to corrosion (it has to be kept in very dry conditions), so it was not simply a question of only showing the date at which it was created, but working out how it had survived until it was unearthed in the 1950s.”

Another factor is the status of helmets a millennia ago. The Yarm example comes from a time when encasing a skull in metal was, amazingly, only just starting to catch on. Smithsonian Magazine notes that between the 6th and 8th centuries, “Only northern Europe’s rich and powerful had access to the headgear, which featured showy designs and was worn as a sign of authority rather than a form of protection.”

Quoted by the Northern Echo, Dr Caple refers to the later helmets as “simply manufactured, well designed to protect the wearer (rivets flush with the surface so they did not catch bladed weapons) but no longer decorated.” The Yarm helmet, reportedly made in northern England, is a workmanlike example of “personal protective equipment for a warrior”. Further protection was provided by a chain mail shirt, known as a “hauberk”.

This particular item of Viking headgear was underground, but it’s not clear why. In the 10th century Christianity shifted focus away from consigning inanimate objects to the earth. According to Dr Caple and Smithsonian Magazine, the helmet “appears to have been hidden in a pit”.

The verified Viking helmet in Britain is sure to draw visitors to Preston Park Museum. Stockton councillor Jim Beall calls the news “very exciting”, adding “The museum is open to the public once again and it is great to welcome visitors to see this fascinating piece of history.” It’s a long way from Valhalla, but the Yarm helmet has found a good home…