What on earth – or rather, on water – is a “floatel”? It’s a term long-established for accommodation at sea, such as that enjoyed by oil rig workers.

On a swankier note, giant cruise ships are often described as floating hotels. The word covers a variety of settings, from the functional to the fabulous.

But the world’s most high profile floatel became like a disaster movie on the waves back in the 1980s. The Four Seasons Barrier Reef Resort was intended as a luxury spot in the crystal blue waters of Queensland, Australia. 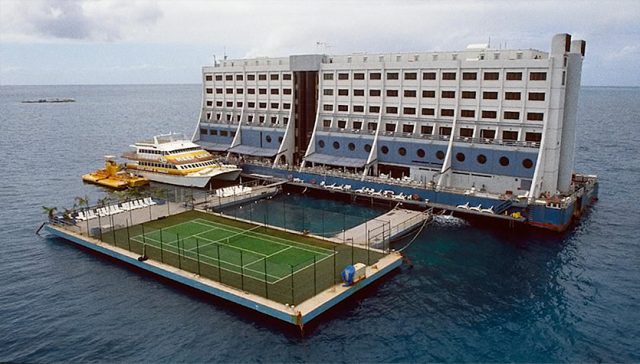 Diver Doug Tarca thought it would be a good idea to lash some boats together and create a spectacular venue for paying guests to lay their heads.

However, his mind was blown off course when noticing oil riggers’ digs and their platforms. Why not turn that basic concept into a swanky hotel, the experienced undersea operative thought? A major upgrade would be needed of course, but the seeds for the new venture were well and truly planted.

The location opened for the press on February 1988 to much fanfare. Glamorous it may have looked, yet the lead up to this point had been fraught with difficulty. 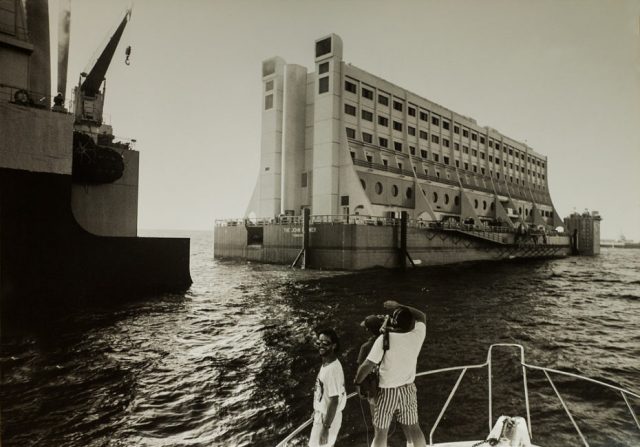 The idea was one thing… the practicality on the other hand? Quite another!
Logistically, the arrangement was quite elaborate. Construction of the floatel happened over in Singapore. So once it was finished, with a some-might-think unlucky price tag of around $13 million, the end product and its “oil rig-style anchoring system” was transported 3,000-odd miles to the final destination.

That was the John Brewer Reef, 40 miles off the coast of Townsville city. A place of stunning natural beauty – which needed to be dealt with before the Four Seasons could hove in.

Coral was cleared out, reportedly disrupting the ecosystem and angering the environmentally conscious. The floatel was generating publicity before it even arrived, of the worst kind. 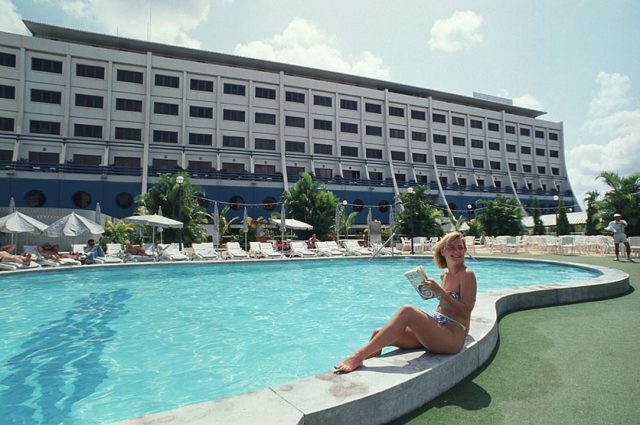 Nevertheless, Tarca’s vision had made the leap to reality. Unfortunately it was leaping into a raging tide of trouble, in the form of a tropical cyclone! Before any guests could set foot in reception, a deluge of extreme weather wreaked havoc on the brand new Babylon-on-sea.

Even if they wanted to see the place, they couldn’t – the cyclone consigned the shuttle boat to the depths, as well as abruptly relocating the observatory to the bottom of the ocean. 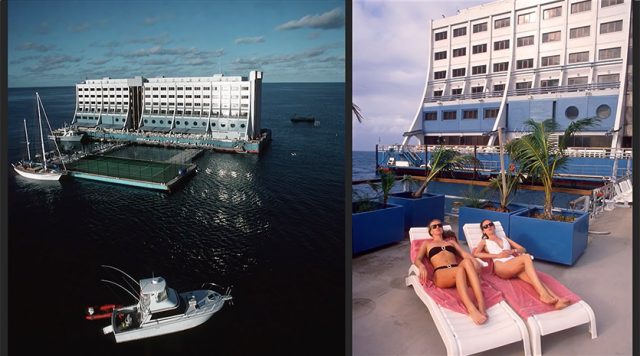 Drama aside, the idea was arguably a little flawed from the get go. Robert De Jong, managing curator at Townsville Maritime Museum, outlined the problems to Business Insider Australia last year, saying “If you’re a middle aged American couple, if you don’t do scuba diving or snorkelling, what you see is Pacific [Ocean] and more Pacific. It’s a bit monotonous probably.” He also questioned the high cost of the stay, which may have left some bank accounts all at sea.

The final nail in the coffin was when someone clocked the presence of thousands of World War II ammunition pieces, rusting away below the hotel.

Check out was no doubt a bit faster than usual on that day. Paradise in the Pacific turned out to be fleeting, surviving for under a year before the team threw in the towel.

There’s a silver living of sorts, in that the floatel went to Ho Chi Minh City in Vietnam for approx a decade. As the Saigon Floating Hotel it was known for its nightlife. By 1997 the boogie wonderland had become a fiscal liability. Where it went next adds extra intrigue to the legacy.

North Korea’s east coast, and the unlikely setting of Mount Kumgang, has been the floatel’s home since the late 1990s. The structure was supposed to make dreams come true for tourists, and that idea continued in an unexpected way. 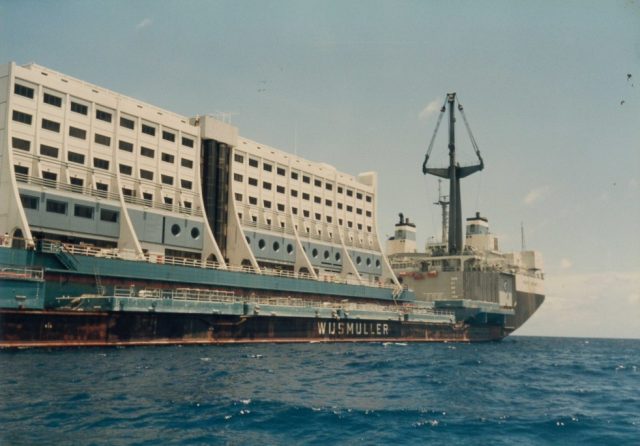 With the Korean War’s impact on families echoing even decades later, the “Hotel Haegumgang” was brought in to bring together loved ones who’d been separated. Floating near the DMZ border, the hotel’s latest incarnation was as a symbol of peace between North and South.

A precarious situation, and one tragically underlined after a civilian was gunned down by a North Korean sentry.

The bell tolled for this superstructure with a haphazard history once Kim Jong Un took charge.  Therefore, 30 years after the first opening of the hotel, Kim Jong-un visited it in 2019.

“In terms of architecture, the building is outdated. It is in a terrible state by itself. This hotel is an incomprehensible mess, in which there is not even a hint of our national character, “- Chapter DPRK Kim Jong Un

For the Supreme Leader, the sight was distinctly unimpressive. According to the Mail, he “vowed to destroy all traces of the South’s development and the North would begin its own constructions anew.”

Another Article From Us: No Photos! 5 Surprising Places Where Pictures are Off Limits

Doug Tarca couldn’t have foreseen the destiny for his floating hotel. Instead of taking people on a trip to a lush lagoon, the project wound up in murkier waters, targeted by world powers. In one sense it failed. In another it created a compelling story with its own cult following…

« 10 Things You May Not Have Known About -The Naked Gun
Want to be a Panner? A Mini Gold Rush is Going on in The U.S. »