Cleopatra! Her name conjures up images of Ancient Egypt and historical intrigue. But what lies beyond the legend?

Read on to discover 8 auspicious – or should that be asp-icious? – facts about the incredible Queen of the Nile…

8. She liked a drink

Cleopatra is often depicted, rightly or wrongly, as a lover of men. She famously gave birth to Julius Caesar’s son, Caesarion.

Shakespeare immortalized her deeply political and intensely personal entanglement with Mark Antony in ‘Antony and Cleopatra’ (early 17th century). She enjoyed his protection. He raided her jewel-encrusted piggy bank. Together they were unbeatable. And some of the time they were drunk! 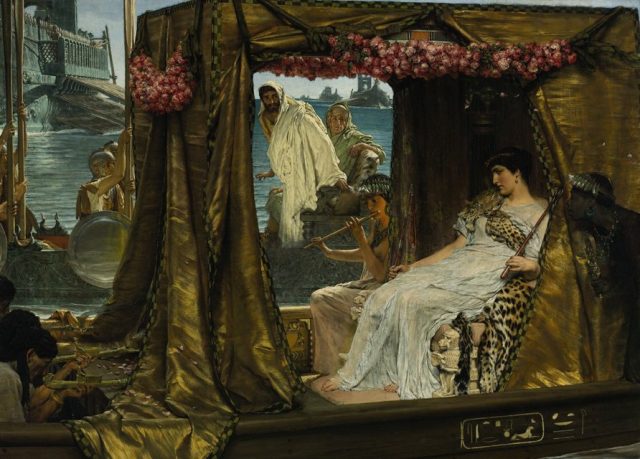 The Meeting of Antony and Cleopatra (1885), by Lawrence Alma-Tadema

The “Inimitable Livers” drinking society was painting the town red hundreds of years before the likes of Errol Flynn and co came into being. Founded by the two high profile love birds, the gang quenched their thirst… and by the sounds of it had a lot of fun.

History writes the latter “supposedly involved wandering the streets of Alexandria in disguise and playing pranks on its residents.” Who knows what happened to those who didn’t see the funny side…

7. She was a victim of propaganda

The beginnings of the great Roman Empire lay in fallout from Cleopatra’s relationship with Antony.

Together with Caesar’s adopted son Octavian and general Marcus Aemilius Lepidus, Antony was part of a trio called the Second Triumvirate. Created following Caesar’s assassination, they tried sharing Rome but it didn’t work out. In fact, that’s an understatement. 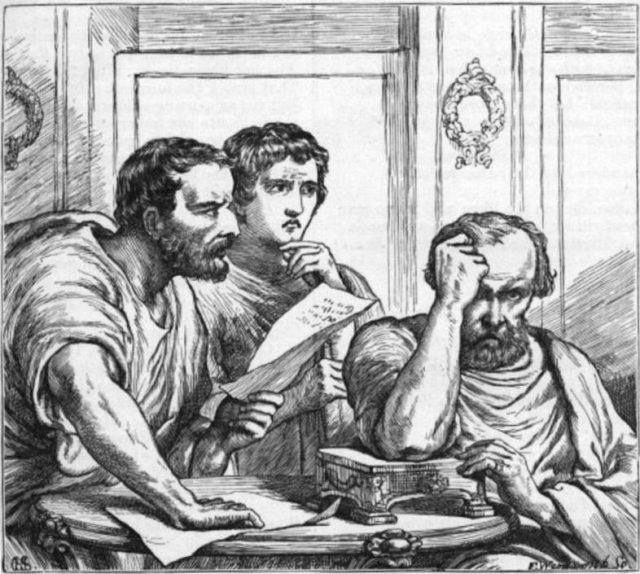 Octavian was on track to becoming the first Emperor (as Caesar Augustus) and wanted Antony out of the picture. So he got at his rival through Cleopatra. Octavian presented to the senate what he claimed was Antony’s will. Apparently the lover of Egypt wished to leave juicy chunks of Roman legacy to his Queen.

The will is thought by many to be propaganda. If it was a lie, then it proved a powerful one. “The attraction of blaming an exotic woman, the eastern queen Cleopatra, for corrupting Antony was the tale that posterity has accepted” writes Eve MacDonald for The Conversation.

When Antony and his army took to the waters to battle Octavian, Cleopatra led part of the charge. It didn’t end well, but she wasn’t going to take those accusations lying down…

6. She had an… interesting… family history

Things were done a little differently back in ancient times. Marrying a sibling is beyond the pale today, but in Cleopatra’s time? No problem!

Incestuous activity kept bloodlines pure and strengthened power bases. Cleopatra did a fair amount of that, marrying 2 of her brothers over the years, one of whom became her co-regent. In fairness, she was only following the example of her Mum and Dad, widely believed to be brother and sister themselves.

Families are complicated. And in Cleopatra’s case, dangerous! The pursuit of glory sometimes led to those nearest and dearest getting in the way. When Arsinoe IV opposed Caesar’s control of Egypt, big sister Cleopatra wasn’t impressed. Once Rome had its sandals under the table, the knives were out.

Live Science writes that, while Arsinoe faced exile to the city of Ephesus (now in Turkey), “Cleopatra saw her half-sister as a threat and had her murdered in 41 B.C.” The site was reporting on bones found in the area in 2013, thought to be those of the slaughtered sibling…

While Cleopatra is a striking and singular figure in history, she was the latest in a long line. The name translates as “Glory of the Father”, with the famous female taking on the mantle of Cleopatra VII in early 52 BC. Ptolemy XII Auletes was the man whose glory she inherited! 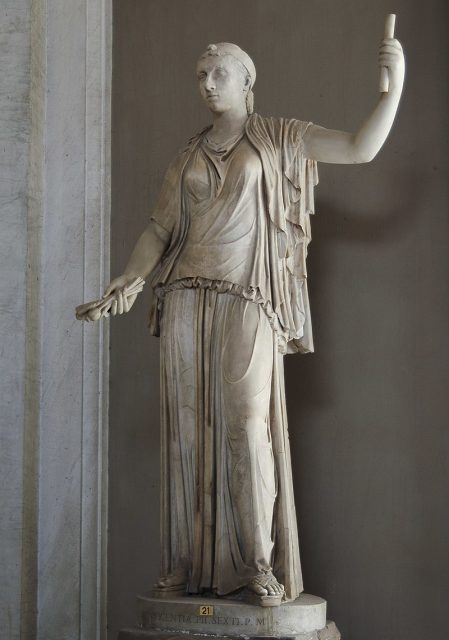 The number may be lucky, yet ultimately Cleopatra’s reign ended in high drama. More on which later! “Officially, only seven princesses with the name ‘Cleopatra’ are credited” writes History Extra, adding there is “some confusion over the length of reigns and the degree of real power held.”

4. She walked like an Egyptian, but that was it…

Cleopatra is believed to be as Egyptian as the pyramids. And in some ways she was. Birth-wise however, it’s a whole other story!

She was actually part of the Ptolemaic dynasty, which began when military man-turned-Pharaoh Ptolemy I took charge of the country after the demise of boss Alexander the Great in the early 300s BC. “He made offerings to the Egyptian gods,” writes National Geographic, “took an Egyptian throne name, and portrayed himself in pharaonic garb.”

Cleopatra, who was Greek, similarly respected her kingdom’s traditions. She even went one better by learning the language…

3. She’s being played by Wonder Woman

Cleopatra is still making headlines in the 21st century. A new motion picture has been announced, starring Gal Gadot and directed by Patty Jenkins. Gadot and Jenkins worked together on ‘Wonder Woman’ and its delayed sequel. 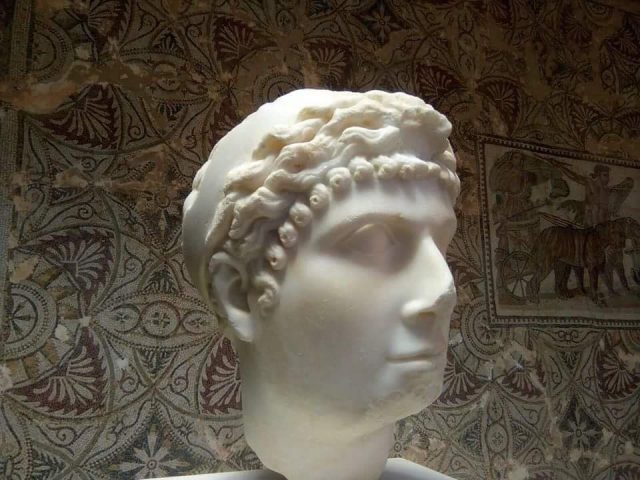 A Roman head of either Cleopatra.

Reactions to the news are mixed. As The Independent reports, “Some claim that casting an Israeli-American actor in the role of the iconic Queen of the Nile is ‘whitewashing’ the character.”

Critiquing the critics are various commentators, who point out Cleopatra’s Macdeonian Greek background means complaints about skin color are misplaced.

Gadot’s casting calls to mind Elizabeth Taylor’s performance as the Queen of the Nile in troubled Hollywood epic ‘Cleopatra’ (1963). Co-starring Richard Burton as Mark Antony, it played host to its own intrigue when Burton and Taylor began their infamous and long lasting relationship behind the scenes.

Productions like ‘Cleopatra’ helped promote the idea of the ruler as an exotic and rather gorgeous presence. How accurate was this view…?

2. She wasn’t a supermodel

Looks aren’t everything! Cleopatra is thought of as a staggering beauty. The reality on the other hand is different. This was an individual whose self expression and intelligence spoke louder than her cheekbones. 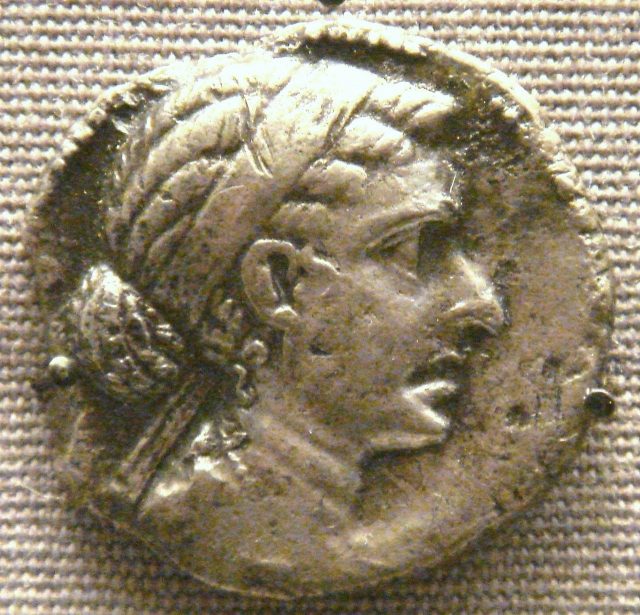 Cleopatra on a coin of 40 drachms from 51–30 BC, minted at Alexandria

She certainly made an impression with her lavish appearances. But talk of her being a vision of loveliness is viewed with scepticism today. There’s no conclusive proof of what she looked like, though educated guesses have been made.

Ancient Egyptian coins depict a less than elegant profile on the side. Though as History notes, Cleopatra may have “intentionally portrayed herself as masculine as a display of strength”…

Shakespeare wrote the most well-known version of her exit. A grief-stricken Queen takes her own life using a poisonous asp. That’s the Bard’s take. But how did Cleopatra really depart this world…?

Writing in 2013, author and criminal profiler Pat Brown posed the theory that she was brutally despatched. For her the evidence didn’t stack up, so she wrote the book ‘The Murder of Cleopatra: History’s Greatest Cold Case’.

In a piece for The Scientist, covered by Smithsonian Magazine, Brown points out “red flags” in the historical accounts. These left her with questions such as: “Why were the wounds from the fangs of the snake not obvious?” Her analysis was less Shakespearean tragedy, more CSI: Ancient Egypt!