Norfolk, a county in eastern England, has seen its share of buried treasure. In 1948 the Snettisham treasure from 100BC was found in a field which kept turning up massive amounts of gold items all the way up to 1973.

Another excavation in 1990 turned up twice the amount of finds as the first excavation. In the winter of 2005 fifty nine year old Maurice Richardson using his metal detector was searching for artifacts from an old WWII airplane that crashed near there and found an Iron Age torc that ended up being worth nearly five hundred thousand dollars. 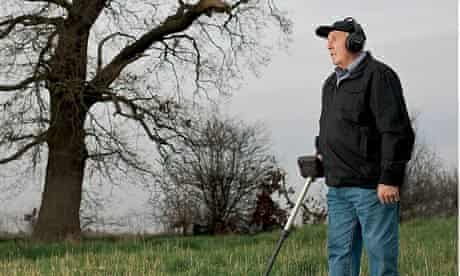 Richardson was metal detecting in the rain and passed over an object that gave a small ping. Because of the weather he was inclined to pass it up but then changed his mind.

After digging down into more than two feet of mud he found the treasure that the British Museum called “the most valuable discovery in recent times”.

Richardson remarked, “It’s a wonderful feeling and just shows that anyone can do it. It’s not about the money, but the fact that it has been saved for the nation. It’s two thousand years in the ground and it is unique.

What are the chances of walking acres of field and passing over it? The odds are astronomical.” As per British law, he turned the find into the local authorities to be authenticated and the proceeds from the sale were split by Richardson and the landowner, Trinity College of Cambridge.

According to the British Museum at britishmuseum.org where the torc now resides, a torc is a metal piece of jewelry for around the neck or the arm which was often twisted with more metal strands to give it more strength. 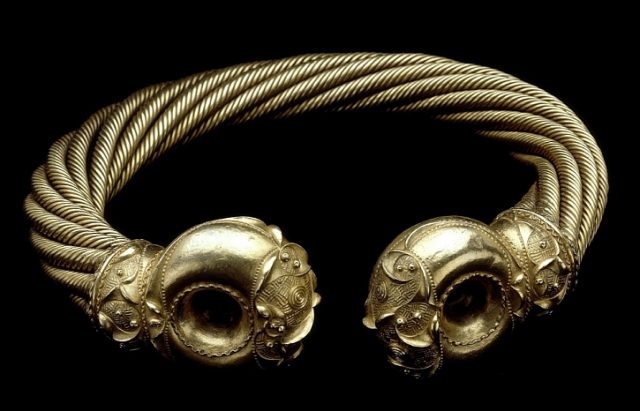 The gold torc is now at the British Museum

Most of them had decorative ends called terminals but the older ones from about 1400BC were rather plain.

In her book, The Necklace as a Divine Symbol and as a Sign of Dignity in the Old Norse Conception, Marianne Görman claims that only the most important wore neck rings. Celtic gods and goddesses are shown in art wearing torcs and Greek and Roman sculptures of Celtic warriors wear torcs.

In Scandinavia the torcs were considered divine and were used in religious rites. The Celtic queen and military commander, Boudicca was known for wearing a heavy gold torc and Roman historian Livius called the torc a symbol of a warrior.

Germanic tribes saw neck rings as a sign of bravery, leadership and prestige as well as a sacrificial offering. During the Viking Age, torcs were often placed in peat bogs as offerings to the gods.

Rather than gold, the Vikings preferred silver and sometimes cut pieces of silver from their neck rings as a form of currency.

The Iron Age hoards found at Snettisham consisted of seven silver and bronze torcs and in a lower excavation pit were two bronze torc bracelets, two silver torcs and ten gold torcs. In total they found one hundred and seventy five torcs and fragments of many more. 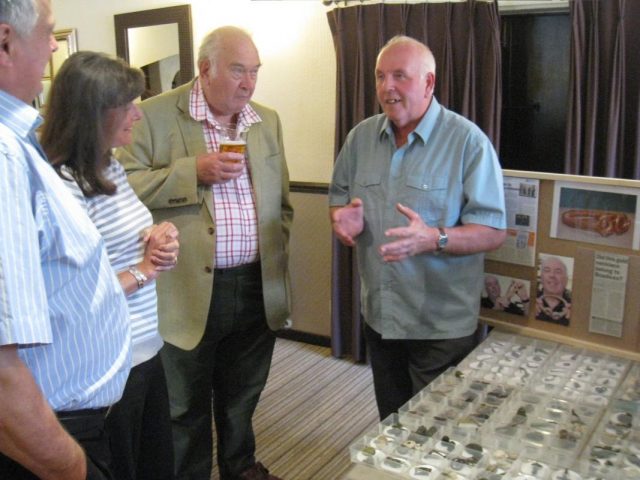 In 2016 a hoard of twenty six silver Roman coins from between 154BC and 37AD were discovered near Norwich at an undisclosed site.

Adrian Marsden, Norwich Castle’s Museum expert, claims that two other hoards were found in 2012 and 2013 and believes more coins are still buried. Marsden believes the coins were buried by a Roman soldier or citizen around the time of the invasion of Britain in 43 to 84AD.

In 1840 over eight thousand items including silver ingots and coins, English and Carolingian jewelry and hacksilver were found as the Cuerdale Hoard in Lancashire on the banks of the River Ribble. The hoard was thought to have been buried between 903 and 910AD along a road known to have been a route used by Vikings.

« Discovery Shows Jurassic Park Dino was Actually a “River Monster”
Believed to be the Smallest Detached Home in Britain Yours for $400,000 »