Use AI To Convert Ancient Maps Into Satellite-Like Images

Ever wish you could travel back in time with Dr. Who? Or that you could Google Earth the planet as it was in ancient times? Well, you can’t.

But what you can do is view ancient maps as Google-like satellite images.

It’s always interesting to look at ancient maps and imagine what life might have been like for those people living hundreds or even thousands of years ago. But it would be even more interesting to be able to see what these maps might look like through a modern lens.

Using artificial intelligence, we can now see how different regions have changed over time. Old maps and images are being converted so that they are more like modern satellite images, giving them a more realistic appearance.

According to SCIENCEMINT, that is exactly what Henrique Andrade has been up to. Henrique is a student at Escola Politecnica da Universidade de Pernambuca, one of the ten oldest engineering schools in Brazil. 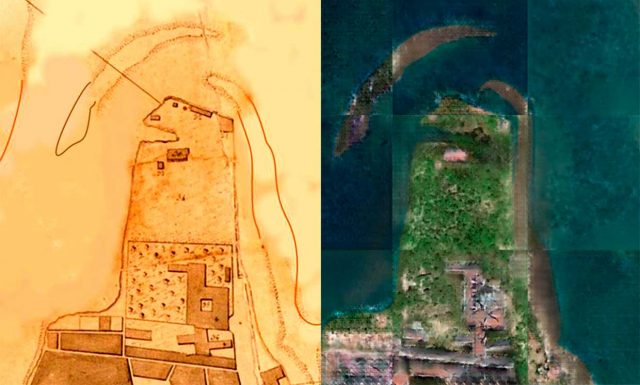 For a while now, he has been putting his focus on examining maps of his hometown Recife. He says, ‘I gathered all these digital copies of maps, and I wound up discovering things about my hometown that are not so widely known’.

He then goes on to say, ‘I feel that in Recife, people were denied access to their own past, which makes it hard for them to understand who they are, and thus what they can do about their future’.

This is when Henrique had the ingenious idea that he put forward to his university professor, Bruno Fernandes. Henrique said he wanted to create a machine-learning algorithm that would take ancient maps and transform them into Google Satellite images.

In doing this, he believed that people would become more conscious of how the use of land has changed over the years, and how urbanization has had an impact socially and economically.

To turn their idea into a reality, they used an existing creative application for artificial intelligence called Pix2pix. Pix2pix depends on two neural networks One network creates images based on the input set, and another network checks if the generated image is authentic, before determining whether the construction is more deceptive or realistic in appearance.

This is done as a form of quality check. Both networks are then prepared to fool one another, and as a result, they eventually create realistic-looking images based on the historical data provided.

The technology used is based on conditional adversarial networks, which is a form of general-purpose solution that applies image-to-image translation. This means it can also be applied to things like drawings, paintings, and even sketches.

In Henrique and Bruno’s study, which was published on 24th September 2020, they took a map of Recife from 1808 and generated images that looked like modern-day pictures of that area.

‘When you look at the images, you get a better grasp of how the city has changed in 200 years,’ said Henrique. ‘The city’s geography has drastically changed—landfills have reduced the water bodies, and green areas were all removed by human activity.’

As reported in SCIENCEMINT, and according to Henrique, one of the advantages of using this approach is that it doesn’t require much input volume. However, the report points out that the input does require some historical context, and that the resolution of the images it generates is lower than what the researchers would prefer.

Henrique says, “Moving forward, we are working on improving the resolution of the images and experimenting on different inputs.’ What is really exciting is that this new approach to generating modern images of the past could be rolled out worldwide.

And, whilst this would be of interest to many people generally, it could also prove to be extremely useful for historians and anthropologists in the future.