Nearly 100 Coffins Buried Over 2,500 Years Ago Discovered in Egypt

A wealth of ancient sarcophagi have been making the news near Cairo, proving Ancient Egypt is far from dust. The country’s Supreme Council of Antiquities hit the mummified jackpot, with multiple finds made in the Saqqara necropolis area.

The number of artifacts, such as coffins, statues and death masks, just keeps on climbing. Initial discoveries were reported in September. 13 coffins is surely considered a great find for some but the team, led by Secretary-General Dr Mostafa Waziry, hadn’t seen anything yet.

“By the beginning of October, that number had risen to 59, and now the number is over 100” reports Live Science. 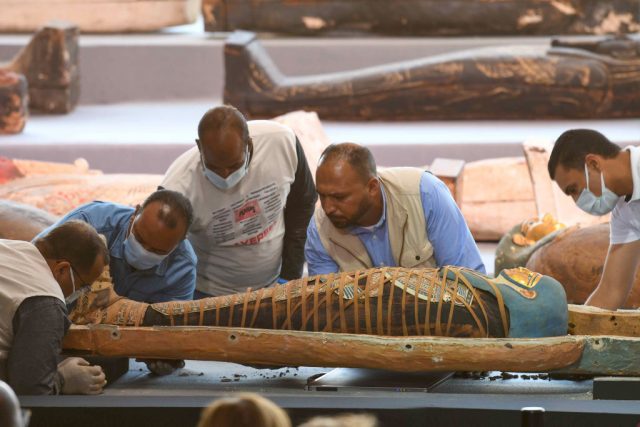 The latest attention-grabbing development was announced over the weekend. Inside 3 shafts, 12 metres long apiece, rested even more beautifully-adorned items. The tomb at the bottom is believed to be 2,500 years old.

How old are the sacred objects and indeed people? Khaled el-Anany, Egypt’s Tourism and Antiquities Minister, told journalists that the Ptolemaic dynasty (320 – 30 BC approx) and Late Period (664 – 332 BC) are likely timeframes.

Not all the sarcophagi feature occupants. One that did was presented to the press for a live lid-opening. For added impact x-rays were applied, providing reporters with a strange scoop of sorts about the deceased! Smithsonian Magazine writes the mummy was probably a middle-aged man, “whose brain was removed through his nose as part of the embalming process.” 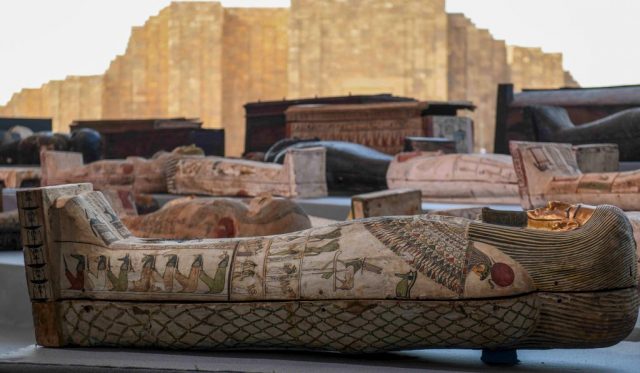 Media interest in the area and its recently-yielded secrets is naturally high. The Smithsonian Institute are putting together a docuseries titled ‘Tomb Hunters’ for release next year. Meanwhile, Netflix are currently streaming ‘Secrets of the Saqqara Tomb’. “Saqqara would have been the place to be seen dead in” quips Campbell Price, curator at the Manchester Museum who’s quoted by Smithsonian Magazine.

As they go on to report, these new finds were in range of the “bubasteon”. Cat lovers may want to look away now – this is a temple in honor of feline deity Bastet, a location where hundreds of furry friends are believed to be entombed. 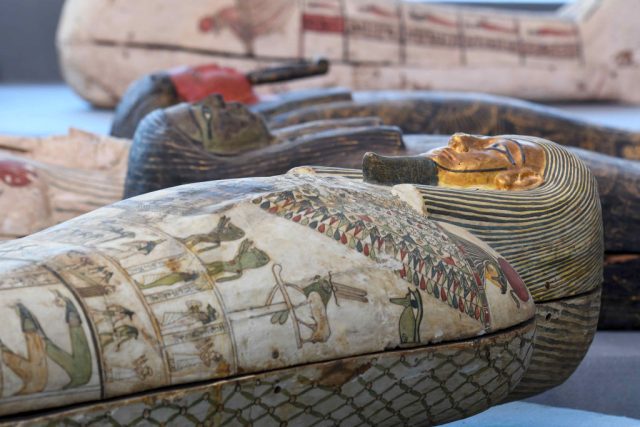 A picture shows wooden sarcophagi during the unveiling of an ancient treasure trove of more than a 100 intact sarcophagi.  Getty 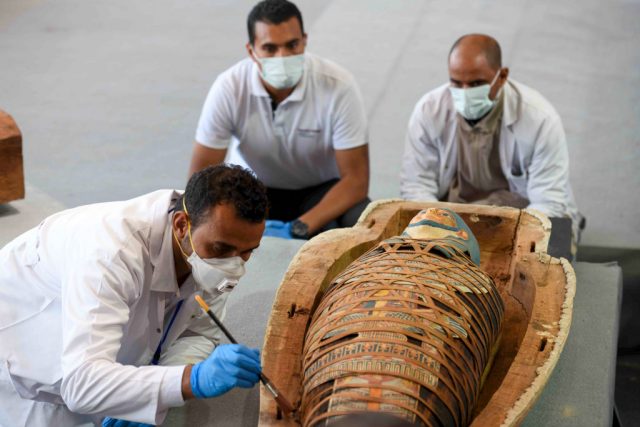 The sealed wooden coffins, unveiled on site amid fanfare, belonged to top officials of the Late Period and the Ptolemaic period of ancient Egypt. Getty

The bubasteon complex is north of the Step Pyramid of Djoser, Egypt’s oldest triangular mystery, which is nearly 5,000 years old.

Artifacts have found a temporary home here for public consumption before they are distributed to museums. The Museum of Ancient Antiquities in Cairo will house some, together with the neighboring National Museum of Egyptian Civilization.

The Grand Egyptian Museum in Giza is also earmarked when it throws open its doors in 2021, pandemic permitting. 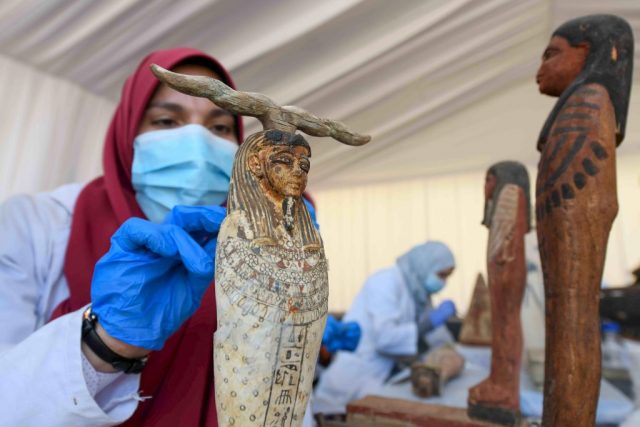 An archaeologist in Egypt cleans a statue during the unveiling of an ancient treasure trove of more than a 100 intact sarcophagi. Getty

Alongside the coffins are statues representing Ptah-Sokar. They number no less than 40 and are gilded. Ptah is described as the creator-god of Memphis, an ancient capital of Egypt where the necropolis is situated. Sokar is another god from before creation who Ptah absorbed, according to legend. Live Science refers to “20 wooden boxes showing depictions of Horus”.

Horus was born to Osiris (who became part of Ptah) and Isis. He famously had the head of a falcon.

On a more enigmatic note, two wooden tributes to a figure named “Phnomus” have been found, though experts aren’t sure who this is. It wasn’t only the important types who were immortalized. Live Science mentions figurines of “shabti”, unfortunate individuals required to be servants in the world beyond.

The Saqqara story shows no signs of slowing down, and good job too. Egypt’s political upheavals, combined with the unwelcome presence of Covid-19, have wreaked havoc with the tourist trade.

Khaled el-Anany is promising further revelations. The Guardian writes that “another discovery at the Saqqara necropolis” is being unveiled to the world before Christmas. Archaeologists have more than enough to occupy themselves with in the meantime.

Another Article From Us: Petrified Tree Trunk in Arizona is 225 Million Years Old

2020 may be a write off in terms of travel, but could prove a defining chapter in the exploration of Ancient Egyptian history…