Wildlife workers circling above the desert in southern Utah this month were more than a little shocked to discover a tall, rectangular slab of shiny metal, plunked in the midst of a pile of rust-coloured rocks and stones, an incongruous sight to say the least.

The men, from the Utah Department of Safety, posted pictures of the slab on their social media feed, and soon readers were speculating whether it was something akin to the obelisk in 2001: A Space Odyssey, the 1968 landmark film by Stanley Kubrick.

The pilots were on the job counting big horned sheep, part of the state’s efforts to keep track of the species and how well it is faring in the harsh hills and hot weather.

Their helicopter was circling so the team could count the sheep, when suddenly one pilot, Bret Hutchings, caught sight of the weird, out of place object.

Initiate the protocols and meet at the rendezvous point. It’s begun.

“That’s been about the strangest thing that I’ve come across out there in all my years flying,” he noted later when he posted the pictures. The object stands about 10 – 12 feet high, and has a rectangular shape, just like the famous obelisk in “2001.”

It seemed, Hutchings said, to be fastened deep into the ground, somehow, although he didn’t speculate on just how that might have been accomplished or, more importantly, why someone would place it there.

Utah’s state police also posted photos of the strange find, but declined to share just where Hutchings and the group discovered it.

Utah is a big state, and officials do not want curious “alien seekers” to go off in search of the slab, only to get lost in the desert and end up in some kind of physical peril. 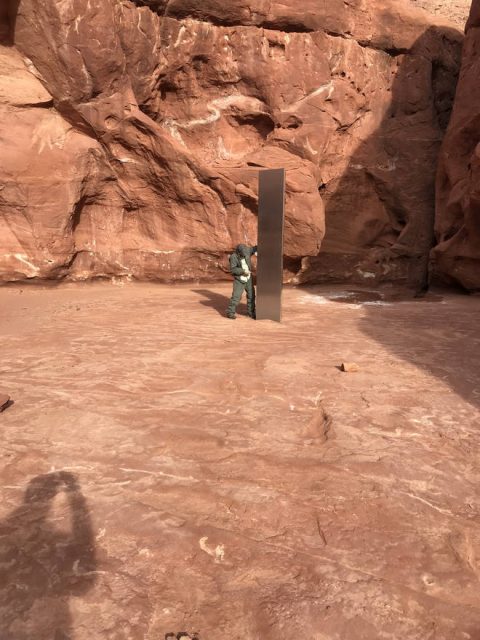 It was one of the biologists on Hutchings’ team who first spied the monolith, and drew the attention of the others to it. “He said, “whoa… we’ve got to go look at it!’” Hutchings said.

No one seems to be willing to take a guess as to what the metal monolith might be, but one adventurous individual did theorize that it is the handywork of a performance artist, who placed it in the desert and stood back to chuckle over everyone’s reaction.

If that’s the case, it was little more than a bit of harmless fun. Perhaps officials will discover who did it if the monolith disappears and the cheeky person then takes credit for creating a fuss.

Hutchings agreed, saying that, “I’m assuming it’s (by) a new wave artist or something, or someone who’s a big fan of 2001: A Space Odyssey.”

Renowned American artist Liam Sharp got in on the fun and fuss about the discovery on his Instagram account by posting this comment: “I love this. I imagine it’s an art piece, but what if it isn’t?” In other words, what if extra terrestrials are somehow responsible? 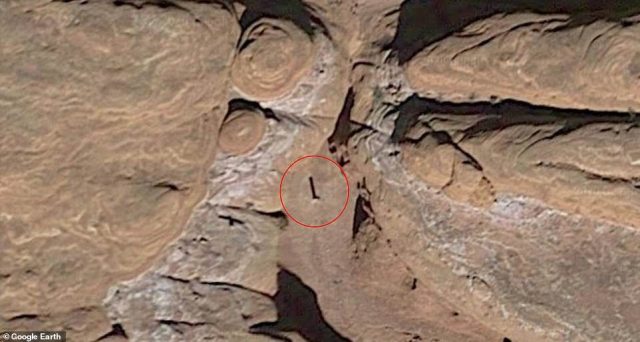 It’s created a momentary distraction for a state – in fact, an entire country – that is overwhelmed with bad news every day, particularly as the coronavirus continues to spread in America.

Big horned sheep are perhaps the most famous animal that populates Utah’s state parks, because their striking appearance – massive, curved horns, particularly big on the males – have made them symbolic of the rugged adaptability needed to cope in the region’s harsh climates.

In some areas it is hot, dry and rocky, while in others there are alpine forests and mountains. The big horned sheep roams through it all.

Another Article From Us:  Ancient Arrows Dating Back 6,000 Years Found in Ice in Norway

Many of these majestic animals were nearby when the monolith was planted in this remote spot in Utah, but so far, those groups of big horned sheep aren’t giving away anything.

« Ancient Arrows Dating Back 6,000 Years Found in Ice in Norway
Headless Vikings the “most exciting & disturbing” Archaeological Discoveries of 2009 »