This huge collection of ancient cliff art paints a dramatic picture of early humans and giant beasts in the Amazon. Early inhabitants worshipped and hunted elephant-like mastodons and giant horses – alongside other Ice Age animals – back when the lush rainforest was a parched savannah.

At least that’s according to the extraordinary paintings, made with red ochre by long-dead artists.

They are believed to be between 11,800 and 12,600 years old and took at least hundreds of years to create. Experts are staggered at the scale of the find, one of the largest of its kind in South America. 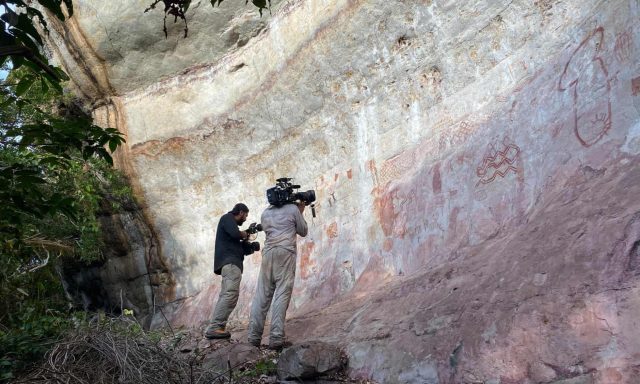 Located in the Serranía La Lindosa region of Colombia, the discovery has been dubbed “The Sistine Chapel of the Ancients”. However instead of a beautiful man-made structure this canvas is all Mother Nature’s handiwork.

The cliff face paintings number in the tens of thousands and were spotted across a trio of rock shelters. Cerro Azul is the biggest, stretching nearly 3 miles. There are around 8 miles’ worth of historic artworks in total. The quality is said to be highly realistic for the time.

Human figures are depicted with colossal creatures. How big were they? Mark Robinson, speaking via a statement from the University of Exeter, refers to “giant herbivores, some which were the size of a small car.”

This “megafauna” gave Robinson and co a possible insight into the ancient artistic exhibit. Examples of extinct wildlife, such as super-sized sloths and mastodons, offered major clues concerning dates. As Business Insider writes, “by about 11,600 BC, humans had likely killed many of the mastodons off.”

Other features daubed include trees, hand prints and “geometric shapes”. A tree wasn’t just a tree to humankind in the dying years of this Ice Age.

Quoted by The Guardian, team leader Prof José Iriarte (University of Exeter) says plants had souls, and that they communicated with people “in cooperative or hostile ways”.

The group, funded by the ERC (European Research Council) and made up of experts from Britain/Colombia, also noted the surroundings.

Artists took their lunch to work with them it seems, before leaving litter on site. Delicacies like frog, armadillo and piranha were consumed, according to the University’s statement. 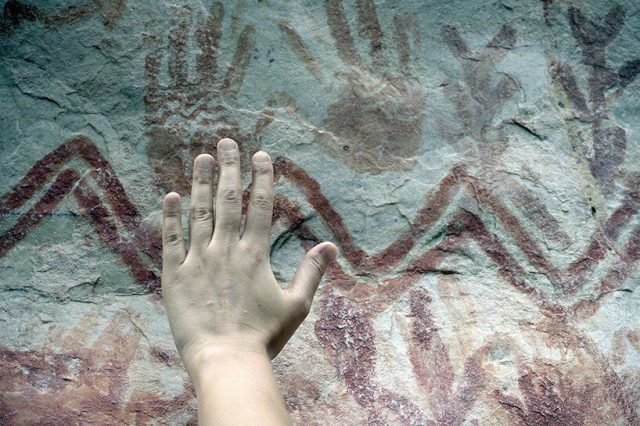 It sounds like the painters needed their strength. Some art is so high up it required drones to take a gander. Images of towers made from wood are displayed.

Reportedly the artists clambered onto these before jumping down. All that work was worth it in the end. Quoted by the statement, Prof Iriarte says the art was “a powerful part of culture and a way for people to connect socially.”

The team began investigating the area in 2017. It was no easy task. For starters the journey there was punishing. Once they completed a 2 hour drive from the town of San José del Guaviare, they had a 4 hour trek to look forward to. And access was only permitted after the signing of a peace treaty in 2016 between the Colombian government and FARC (the People’s Army). A civil war raged there for half a century.
Even then additional permissions had to be sought to avoid danger.

While the cliff paintings were known about since April this year, the find was kept under the radar till now. A TV crew from Channel 4 joined the group throughout the process. Exciting details are about to be revealed to the public as part of a new series, ‘Jungle Mystery: Lost Kingdoms of the Amazon’.

Presented by archaeologist Ella Al-Shamahi, it really was a matter of life and death. As reported by The Guardian, at one point the party had to sneak past a highly venomous bushmaster snake in the dark.

The ancient cliff art provides a much-needed window into a mysterious time for the Amazon. This rich and diverse environment changed a lot over the centuries. What role humans played in the shift can be examined like never before, thanks to these stunning and perfectly-preserved visuals…