People buried in jars? It sounds surprising. But that’s exactly what archaeologists found at a Mediterranean necropolis on the island of Corsica.

Experts working for INRAP (French National Institute for Preventive Archaeological Research) actually made the discovery a couple of years back. With the world dramatically changed, excavations finally picked up again in February.

The necropolis, at the commune of Île-Rousse, features approximately 40 burials as reported by Smithsonian magazine. Jar-based interments form much of the find. Their occupants are thought to date to between the 3rd and 6th century AD.

Images show one skeleton visible inside a broken vessel. This strange sight is somewhere between a cracked coffin and a pottery capsule. Another is described as having been placed inside a “nest” of jars.

Why bury people in jars?

The ceramic jars, or “amphorae”, are “mostly African productions, which were the predominant imports in Corsica between 4th and 7th century AD,” according to an INRAP statement. The vessels held wine but also liquids such as olive oil and brine from Tunisia. 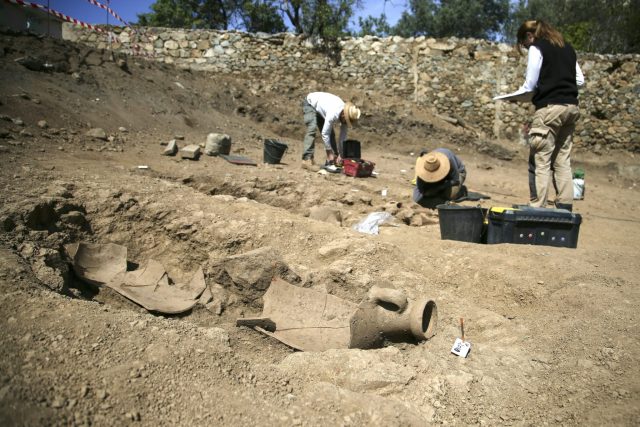 The excavation of the site (Photo Credit: PASCAL POCHARD-CASABIANCA/AFP via Getty Images)

The archaeologists noted that the direction the bodies are buried in “generally favors an east-west axis with the heads of the deceased to the west.”

Why were the ancient people laid to rest in this intriguing way? Ultimately, experts don’t know. A ritual is one assumption to be made — though there’s a distinct lack of offerings or other evidence to flesh out a spiritual context.

It should also be pointed out that the site is close to the Church of the Immaculate Conception. The next stage is to seek out a temple or other structure that might be connected to the necropolis.

One thing investigators are aware of is a history of such burials. The practice is associated with children, based on previous finds.

Smithsonian magazine notes that young ones were buried in jars up until the 20th century. To see adults in the same context presents archaeologists with a funeral-themed puzzle.

A Bronze Age jar containing the remains of an infant lay approx 10 feet below ground. The baby had been there for nearly 4,000 years.

Speculating on what the burial meant, Arbel told the outlet that the vessel seems “almost like a womb, so basically the idea is to return [the] baby back into Mother Earth, or into the symbolic protection of his mother.”

The Corsican necropolis features different tombs, according to Smithsonian magazine. There are those “cut directly into rock, while others were outfitted with terracotta materials, such as flat Roman tiles known as tegulae and rounded roofing tiles called imbrices.”

The condition of the remains is referred to as “average” by INRAP. Two parts of the area are being explored, both covering a distance of approx 6,000 square feet.

The necropolis discovery has shed new light on the background of that part of Corsica. Île-Rousse is long-established, but in historical terms, it’s still fairly young.

Île-Rousse reportedly owes its existence to Corsican military leader and statesman Pascal Paoli, who gave the go-ahead for “a fortified enclosure protecting the port (Le Scalu)” in late 1765.

More from us: 2,500-year-old human remains: The Plain of Jars used to “distill” the bodies before burial?

Experts are busy pondering the matter of jars and their funerary significance. That question may never be answered. But, as with any aspect of ancient history, there is no shortage of questions in the first place.

These incredible burials can surely be called the ultimate time capsules…