A Farmer Found A Mysterious Ancient Tomb Behind A Stone Slab

A farmer stumbled on an ancient and highly intriguing Irish tomb last month. Inside are what look like human remains. But who do they belong to?

The area appears to have been revealed by a crew doing routine land reclamation work on the farmer’s behalf. When their digger moved in to shift a slab, it turned out to be protecting a hidden corner of history.

Described to The Irish Times by local archaeologist Mícheál Ó Coileáin as “a ritual site with an element of burial in it,” the tomb is thought to be around 4,000 years old, placing it somewhere in the Bronze Age (2000–500 BC). 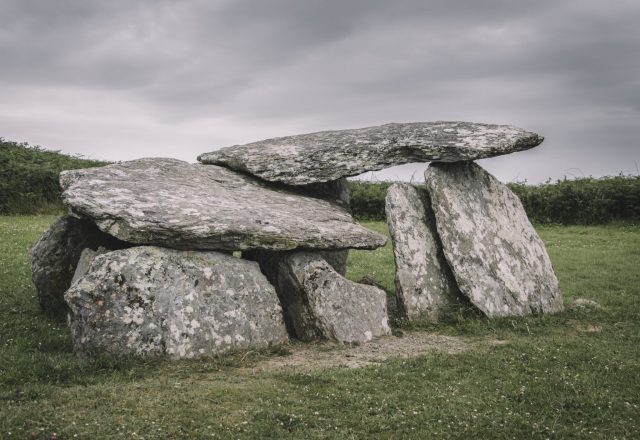 Experts are keen to stress that this information is speculative. The assumption comes from comparing it to other archaeological discoveries in the locality. Specifically wedge tombs, burial chambers that narrow at one end.

However, as Ó Coileáin observes, quoted by RTE, the area “is not like any of the other Bronze Age burial sites we have here,” hence the growing intrigue. Most excitingly, the tomb is in original condition and undisturbed, suggesting no one has explored it in centuries.

Bone fragments — apparently human — discovered in the tomb are being radiocarbon-dated. Data the fragments provide might help narrow down the time period.

The site consists of a chamber lined with slabs, together with an adjoining sub-chamber to the front. A polished stone of “roughly oval shape” according to Live Science, was found in the sub-chamber alongside the human remains. As yet, no one knows what function it serves.

Live Science contacted Ronan Casey of the National Monuments Service. He writes the site “appears to be a ‘cist’ or chamber tomb, consisting of an underground stone-lined structure built to contain one or several burials and capped with a large stone.”

“Souterrain” is the archaeological name for this kind of chamber, mentioned by Mícheál Ó Coileáin to The Irish Times. He adds the design is “associated with the early Christian age.”

The National Monuments Service and National Museums Ireland were called in by the farmer following the discovery, as reported by The Irish Times and other outlets. RTE notes that surveying work is underway.

Where is the tomb located? It’s in the Dingle Peninsula, southwest Ireland, but people are saying no more than that. The National Monuments Service wants the project kept under wraps, fearing interference from spade-wielding opportunists.

An underground megalithic tomb is reportedly a rare sight here. Only the central part has been revealed so far, as written by Live Science. Experts struggle to make a call over its identity due to the site’s subterranean nature. Game-changing discoveries may be waiting in the darkness.

RTE mentions comments made by archaeologist Dr. Breandán Ó Cíobháin. Referring to wedge tombs found in Cork and Kerry (also in southwest Ireland), he says these typically face in a westerly/south-westerly direction.

It could be the case that this latest tomb is oriented differently. Wedge tombs seem to be arranged astrologically, aligned with the moon and other heavenly bodies.

The Daily Mail writes that the Dingle Peninsula “has been the site of several archaeological discoveries, including clochán, dry-stone beehive-shaped huts built by the Celts.”

The analysis of the bone fragments will take a few weeks, meaning history hunters must wait with bated breath. Speculation is mounting, with hopes the tomb will provide unprecedented insight regarding ancient Irish society, Bronze Age or otherwise.

More from us: The Spot Where Caesar Fell Is Opening As A Museum

The Irish Times quotes Mícheál Ó Coileáin, who refers to human settlements on the Peninsula thousands of years ago. They may have enjoyed temperatures a couple of degrees warmer than they are now. Doesn’t sound like a huge difference, but in the days before thermals, these details were probably important.

Archaeologists are always on the lookout for buried secrets, and graveyards contain more than most. With ideas of ancient history constantly being revised, does the mystery tomb mark a gear shift in understanding the ways of old Ireland?