2,000-Year-Old Ancient Roman Baths Emerge From The Sands Of Spain

The ancient Roman Empire was one of immense luxury. During its reign, it saw advancements that helped better the lives of its citizens. Aqueducts, the creation of concrete, and the development of more effective roadways paved the way for future civilizations. Many of these architectural advancements remain standing, and archaeologists recently uncovered more on the southwest coast of Spain.

The ancient Romans first invaded the Iberian Peninsula around 218 B.C. A military force was brought in to defeat the civilization’s long-time rivals, the Carthaginians, who’d already conquered the surrounding islands. Once the land was secured, they built up residential communities and developed industry along the coast.

Unlike remnants found in Italy, Spain tends to feature building foundations of shorter size. Archaeologists are looking to learn more about the ancient Romans’ time in the area, with a particular interest in the fishing communities that set up shop along the coast. 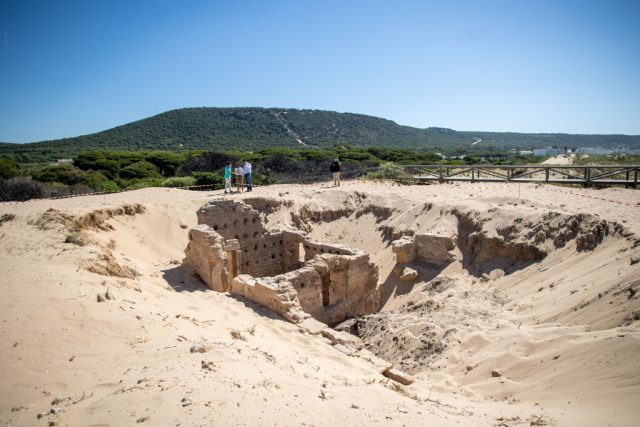 Archaeologists with the University of Cádiz have been researching the area as part of the school’s Arqueostra project, which looks to develop knowledge regarding the production of fish products and sauces from the period.

Roman baths discovered beneath the sands

In May 2021, the team, headed by archaeologist Darío Bernal, announced they’d uncovered 2,000-year-old baths in the area. The baths were found beneath the sands of Los Caños de Meca beach, located on Cape Trafalgar, in the southwest Andalusia region.

The walls, which measure four meters in height, were a surprise to archaeologists and locals, who were seemingly unaware they’d been living above the historic ruins. They were initially believed to belong to a fish or crustacean farm, as the nearby ancient Roman town of Baelo Claudia was known for exporting fermented fish sauce, but were later determined to be the remains of a rural bath complex. 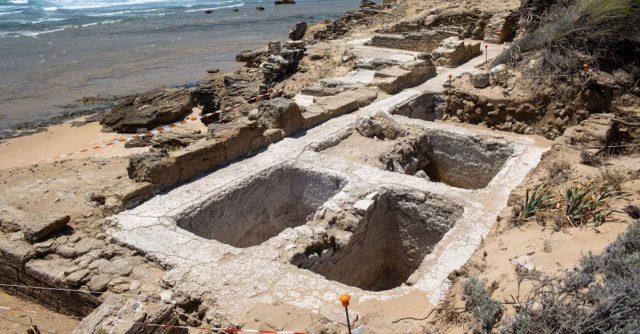 The complex likely served as a communal bath for workers in the fish farming and salting industry. The team behind the find believe it utilized a hot, oven-fueled air current to heat the walls and floors to allow for ritual and steaming bathing, as was common for the time.

The site spans 2.5 acres and features entire walls, doors, and windows that are intact. The rooms are decorated with red, black, and white marble and stucco, which suggests they once featured impressive decorations. Also found were “medieval ceramics” dating back to the 12th and 13th centuries.

It’s believed the baths have remained untouched since they were abandoned during the Late Antiquity period.

The discovery of nearby ancient Roman salting pools

Approximately a third of a mile down from the site, a separate archaeological team uncovered seven ancient Roman salting pools. Ranging in depth from five to six and a half feet, they were used to prepare and preserve food. Two of the pools showed remains of Roman preserves. 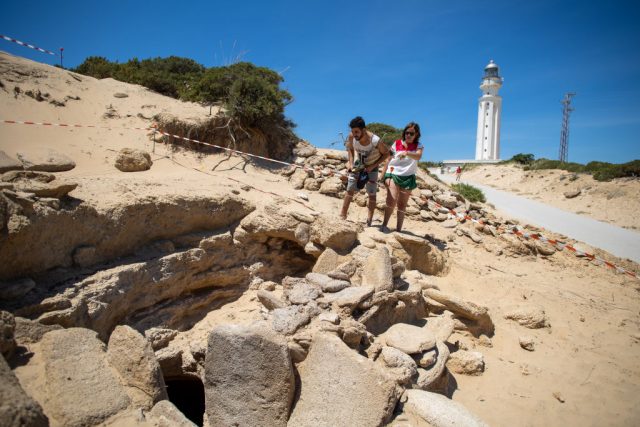 More from us: Ancient Gold Spiral Was Found In Germany But Made In England

The same site also features an ancient tomb dating back some 4,000 years. It contains the remains of seven individuals, including the intact skeleton of an adult female. She was adorned with two gold earrings, a bone comb, shells, and a green beaded necklace.

According to archaeologist Eduardo Wijande, whose team is researching the area, it’s likely those buried in the tomb were placed there because their family believed it to be a special place.