Marilyn Monroe is undoubtedly larger than life. Although she died six decades ago, people today are still fascinated by her life, which was often marked by troubled romances and scandal. One of Marilyn Monroe’s lesser-known mysteries involves an eternity wedding ring given to her by her second husband, Joe DiMaggio. 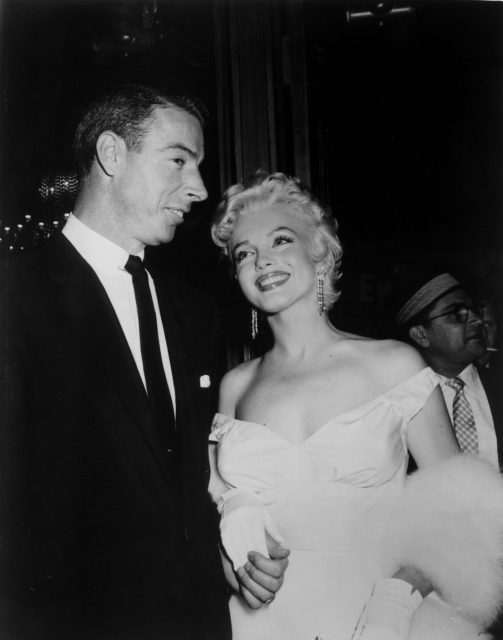 DiMaggio eventually popped the question- perhaps a bit hastily- on January 12, 1954, during a vacation in San Francisco. Because the question was asked a bit out of the blue, DiMaggio didn’t have an engagement ring to give to Monroe when he asked her to marry him. Nonetheless, the two tied the knot at San Francisco’s City Hall on January 14, 1954. Initially, it was supposed to be an intimate civil ceremony with only six guests, but the press was tipped off, and hundreds of reporters, photographers, and fans showed up at City Hall to support the famous couple.

What’s the thing with the ring? 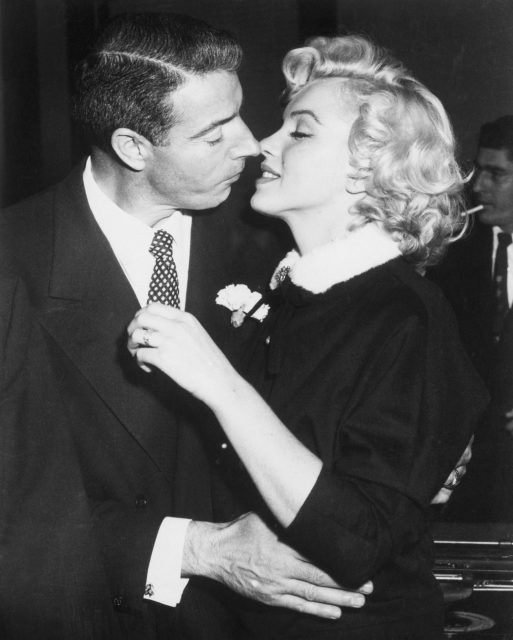 At the time, the wedding seemed to be unexpected, but according to Monroe, the timing fit well with both her and DiMaggio’s schedule. In her biography My Story, Monroe says that DiMaggio suggested the wedding by stating “you’re having all this trouble with the studio and not working so why don’t we get married now? I’ve got to go to Japan anyway on some baseball business, and we could make a honeymoon out of the trip.”

Although the wedding fit well with their schedules, the spontaneity of the affair left Marilyn without an engagement ring. During the three-minute ceremony, Joe DiMaggio did slip a ring onto Marilyn’s fourth finger, and the judge pronounced the couple husband and wife. Although Monroe didn’t have an engagement ring, Joe DiMaggio made up for it with the wedding ring he gave to Monroe. He presented Monroe with an eternity ring that featured 36 baguette-cut diamonds – truly a ring made for Hollywood royalty.

Sadly, the marriage between Joe DiMaggio and Marilyn Monroe didn’t last. Only 274 days after they were married, Monroe filed for divorce. However, DiMaggio and Monroe stayed friends for the rest of her life. In fact, when Monroe died of an accidental overdose on August 4, 1962, Joe DiMaggio handled all the funeral arrangements. Until DiMaggio’s death in 1999, he had six roses sent to her grave three times a week. 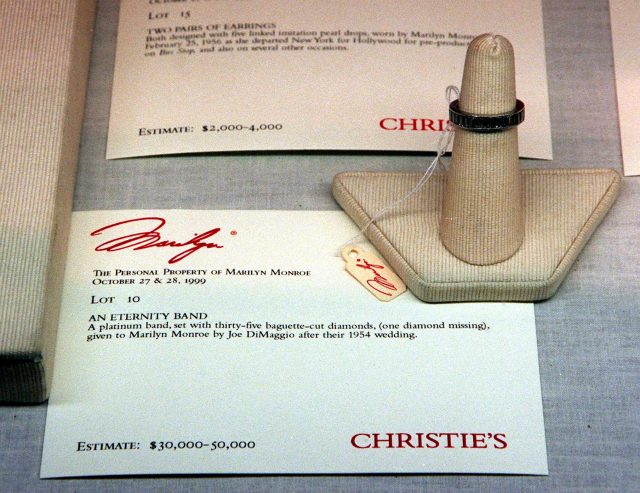 In 1999, the baguette-cut diamond eternity band was auctioned off as part of The Personal Property of Marilyn Monroe sale. Other iconic Marilyn pieces sold at this auction included the Monroe’s Jean Louis dress she wore while singing happy birthday to President John F. Kennedy. The eternity ring, which was missing one diamond, was listed as having a value of $50,000. By the time the auction closed, the ring had brought in a whopping $772,5000.

However, Monroe fans quickly discovered that the ring auctioned off in 1999 did not seem to match the ring given to her by DiMaggio in 1954. The band from the 1954 wedding photos looks very antique and featured a group of diamonds set at the top of the ring. On the other hand, the ring auctioned off in 1999 seemed to be newer looking and was missing the small diamonds at the top.

If that’s not the original ring, then where is it? 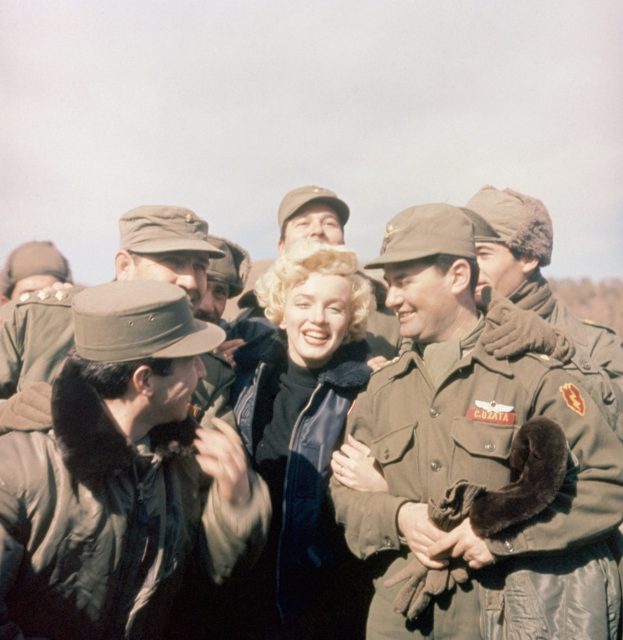 Marilyn Monroe entertains servicemen in Korea during her honeymoon with Joe DiMaggio. Her wedding ring can be seen in this picture. (Photo Credit: Bettmann/ Getty Images)

The ring auctioned off in 1999 means that DiMaggio must have purchased another eternity ring for Monroe at some point during their marriage. So what could have happened to the original ring? Where could it be?

One theory associated with the 1954 ring was that it was borrowed for the wedding from the DiMaggio family. This could explain how DiMaggio was able to get his hands on a wedding ring on such short notice and why the ring hasn’t resurfaced since 1954. This theory doesn’t necessarily explain why Monroe continued to wear the original ring during her honeymoon in Korea (as pictured above), but perhaps it was just a placeholder until DiMaggio could have a second eternity ring made.

More from us: Joe DiMaggio and the Mysterious End of Marilyn Monroe

We might never know what has happened to the original wedding ring. Although DiMaggio and Monroe eventually split up, the eternity ring clearly symbolizes what they thought their love could be, and perhaps they have once again found each other.

« Renewed Search In D.B. Cooper Skyjacking Turns Up Empty
NASA Is Recruiting Volunteers For A Simulated Mission To Mars »