The Field Of Dreams Gets Its Major League Debut: Yankees Versus White Sox

The long-awaited Major League Baseball game between the New York Yankees and the Chicago White Sox is set to get underway at 8:00 P.M. EST on Thursday, August 12. While the game is special for a number of reasons, there’s one thing that stands out: it’s occurring at the famed Field of Dreams.

The game will take place at a baseball stadium constructed next to the diamond used during the filming for the 1989 movie starring Kevin Costner. The film is considered one of the most popular sports movies for its portrayal of the appeal and nature of baseball.

“As a sport that is proud of its history linking generations, Major League Baseball is excited to bring a regular season game to the site of the Field of Dreams,” said Rob Manfred, MLB commissioner. “We look forward to celebrating the movie’s enduring message of how baseball brings people together at this special cornfield in Iowa.”

The game was initially scheduled to occur in 2020 between the White Sox and the St. Louis Cardinals, but was postponed because of the COVID-19 pandemic. The Yankees were initially scheduled to appear but dropped out due to scheduling conflicts. The new date allows for both them and fans to make an appearance. 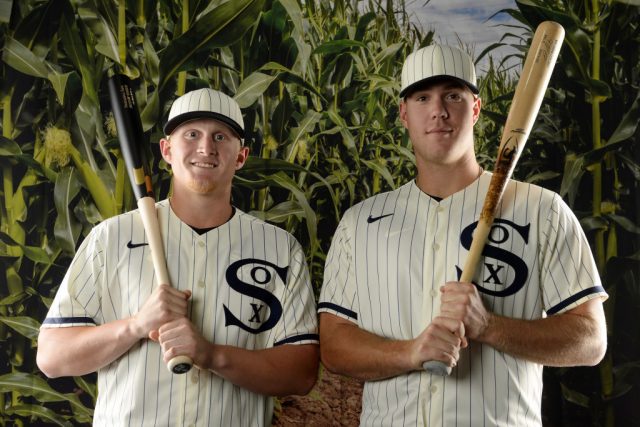 “I think we all have a nostalgic view of Field of Dreams,” said Yankees Manager Aaron Boone. “These things in the course of a long season have all been great ideas and winner in my mind for Major League Baseball. It’s something that I think our entire group is really looking forward to being a part of.”

The game will be attended by 8,000 fans, as well as cast members from the film, with Kevin Costner slated to throw the first pitch. Tickets were allotted via a lottery system to those with Iowa zip codes but quickly hit the reseller market.

Construction of the Field of Dreams

As aforementioned, the new stadium was constructed beside the original movie set in Dyersville, Iowa. It was first built in 2019, before being dismantled in 2020 and rebuilt this year. The original Field of Dreams diamond has continued to draw fans over the years who wish to throw a pitch at the iconic movie site.

To access the field, dubbed “MLB Stadium,” fans have to first walk through the initial Field of Dreams. They will pass through the centerfield cornfield, then down a path leading to the stadium. The set-up also features a corn maze in the shape of the MLB’s logo separating both diamonds.

MLB Stadium was designed to retain the original image of the Field of Dreams, complete with bullpens resembling Chicago’s old Comiskey Park and a manual scoreboard. The teams, dressed in uniforms reminiscent of the 1910s and 1920s, will enter from the right-field via a 16-foot removable panel, allowing them to mimic the now-iconic scene from the film.

According to MLB Field and Stadium Consultant Murray Cook, those overseeing the construction likened the project of bringing the stadium to life as “just like Ray Kinsella and his daughter did on the tractor years ago.”

Field of Dreams is based on W.P. Kinsella’s novel, Shoeless Joe, and depicts the story of a farmer who constructs a baseball diamond in his cornfield after hear a voice say: “If you build it, he will come.” He becomes convinced building the field will summon the spirit of Shoeless Joe Jackson and sets out to construct it, despite the financial hardship it brings his family. 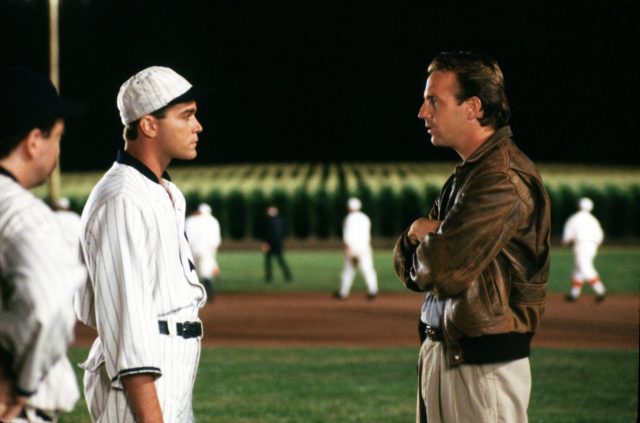 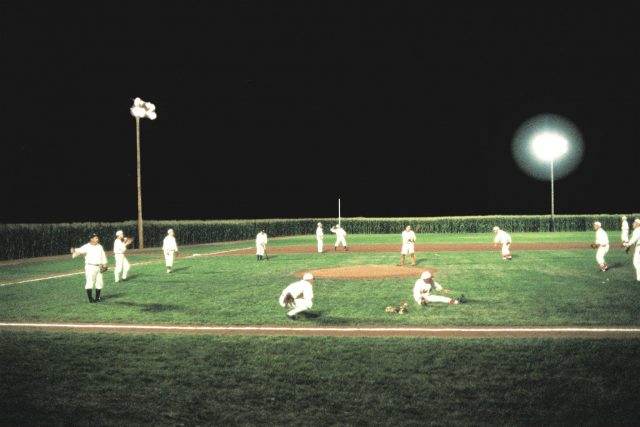 The film struck a chord with audiences, who resonated with its message. At the 1990 Academy Awards, it was nominated for three Oscars – Best Picture, Best Adapted Screenplay and Best Original Score – and it was added to the United States National Film Registry in 2017 for being “culturally, historically or aesthetically significant.”

« Authors Who Really, Really Disliked The Film Adaptations Of Their Books
Hygiene Noon: Cowboys And Cleanliness Were Not Good Bedfellows »