The Marx Brothers are the gold standard for movie comedy. Classic films such as A Day At The Races and Duck Soup are brimming with wisecracks and slapstick. There was nobody like Groucho and co, which is just as well as the team was inimitable.

Here are some eye-opening facts about the men named Marx. We’ll kick it off with a strange tale about a mule! 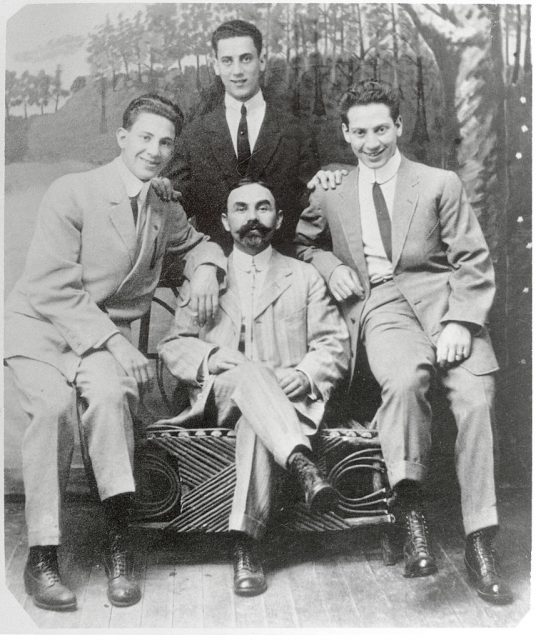 The Marx Brothers when they played in vaudeville under the name of The Three Nightingales. Left to right, Gummo; Julius Schickler, their uncle who served as manager; and Harpo. Standing is Groucho. (Photo Credit: Bettmann / Contributor)

The Marx Brothers may never have happened without a rogue mule. In 1907 they were performing at an opera house in the town of Nacogdoches, Texas.

Julius, Milton, and Adolph (or Arthur) were yet to be known as Groucho, Gummo, and Harpo. They performed on stage as a foursome with Lon Levy, a pal. And, surprisingly for these future stars, the reception wasn’t rapturous.

Yet when a mule reportedly went crazy in the street, the place cleared faster than bees from a blazing hive. When the crowd came back, the boys began mocking them over fleeing the scene. The excited audience lapped up the insults and from this, the knockabout experience of the Brothers we know today was born.

Meanwhile, the Houston Chronicle, reporting on the mule incident, referred to manager/mother Minnie Marx. She’d try and pass her offspring off as 13-year-olds to save on travel money, according to Groucho. Actually, they were 20.

A conductor mentioned her “kids” were busy smoking and shaving: “Minnie shook her head sadly. ‘They grow so fast.'”

Where did those names come from? 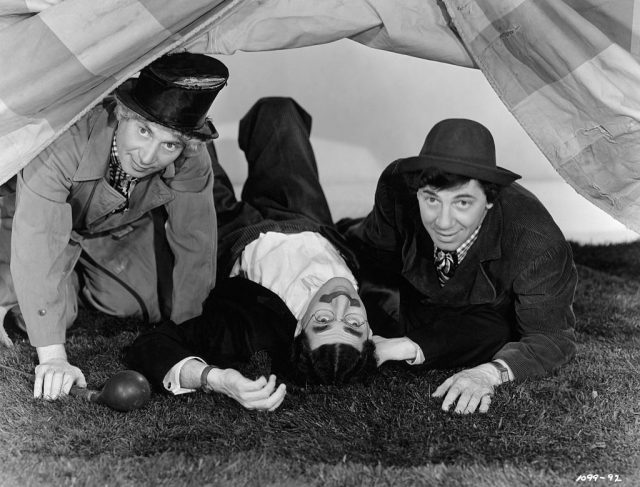 Harpo, Groucho, and Chico Marx peering under a tent in a scene from “Marx Brothers at the Circus.” Undated movie still. (Photo Credit: Bettmann / Contributor)

The legendary handles arrived via a poker game. Comedian Art Fisher started handing out nicknames. For example, “Groucho” came from Julius’s dry wit and habit of wearing a “grouch bag” (or hidden pocket), as written by Mental Floss.

“Harpo” sprang from Arthur’s skills on the harp. Milton’s thing for gumshoes led to “Gummo.” Leonard’s womanizing got him christened “Chicko” (sic). Herbert became “Zeppo” but that one’s a mystery. All the “o”s derive from the comic strip Sherlocko the Monk.

Groucho painted on his famous mustache 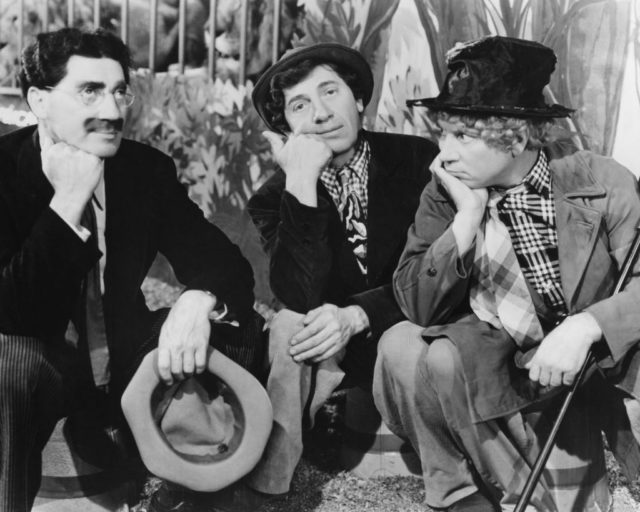 Groucho wouldn’t be the same without his mustache. Interestingly, the facial hair was a stick-on job. And it wasn’t a mustache, either!

Well, it was a proper fake mustache, to begin with. Then one night Groucho realized he could just plaster on a greasepaint alternative.

Later in his career, he sported the genuine article. For a long time, however, the master of mirth turned his face into a living artwork. 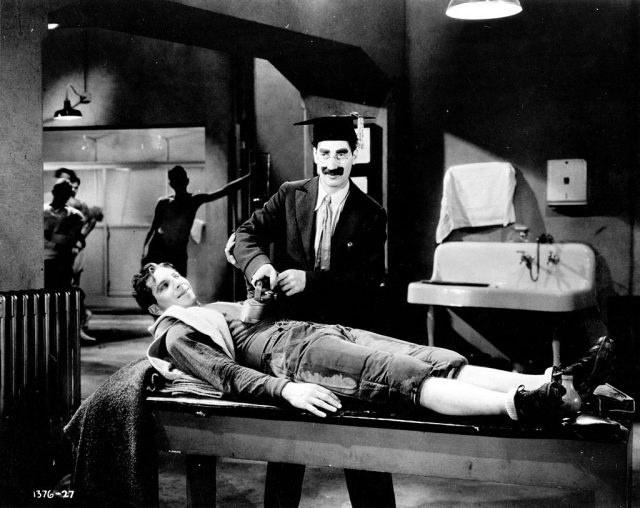 Groucho Marx treats his brother Zeppo (who plays his son) after a football game in a scene from Paramount Picture’s ‘Horse Feathers’ in 1932 in Los Angeles, California. (Photo Credit: Michael Ochs Archives/Getty Images)

The Marx Brothers sure were industrious. Herbert, aka Zeppo, received three patents for things he’d either invented or co-invented. As highlighted by a Marx Brothers fan website, the Vapor Delivery Pad (1952) and clever stuff which “pertained to cardiac pulse monitoring” (1969) are registered to him.

In 1941, he formed the Marman Products Company. Their Marman Clamps traveled aboard the Enola Gay, ensuring those pesky atomic bombs didn’t slide about the place! 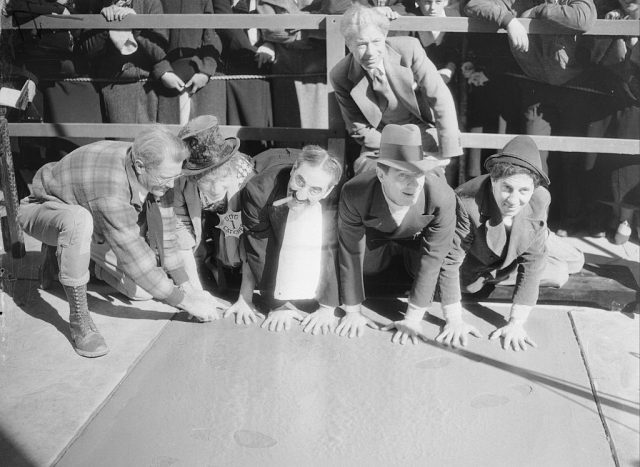 X Marx the Spot. Hollywood, California: Caught hands down are the four Marx Brothers of film fame as they leave their fingerprints for posterity or something at Grauman’s Chinese Theater in Hollywood, California. Left to right, Harpo, Groucho, Zeppo, and Chico Marx. (Photo Credit: Bettmann / Contributor)

More often than not, the first movie of a famous comedy team is the best. But it’s hard to tell in the Marx Brothers’ case.

Humor Risk (1921) was filmed but apparently, early footage didn’t go down well. Or it was unfinished for some reason. The exact truth isn’t known. You expect unreliable narrators for a Marx Brothers article, right?

“By Marx Brothers standards, it would’ve been an unusual flick,” Mental Floss notes “with Harpo playing a heroic detective opposite a villainous Groucho character.”

They nearly worked with Billy Wilder 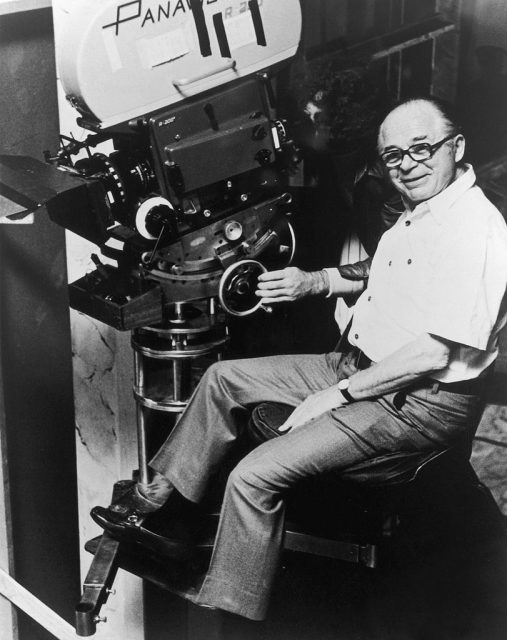 Director Billy Wilder smiles while sitting in front of a camera on the set of one of his films. (Photo Credit: Getty Images)

Groucho Marx delivering lines written by Some Like It Hot maestro Billy Wilder? It could have happened. Sadly some sizeable wrenches were thrown in the works.

Ranker writes that “Wilder developed a script treatment about a group of thieves attempting to pull off a heist during a U.N. demonstration.” Titled A Day At The United Nations, the 1960 project stumbled following Chico’s sad death, coupled with Harpo’s ill health.

Groucho in Batman? Kind of… 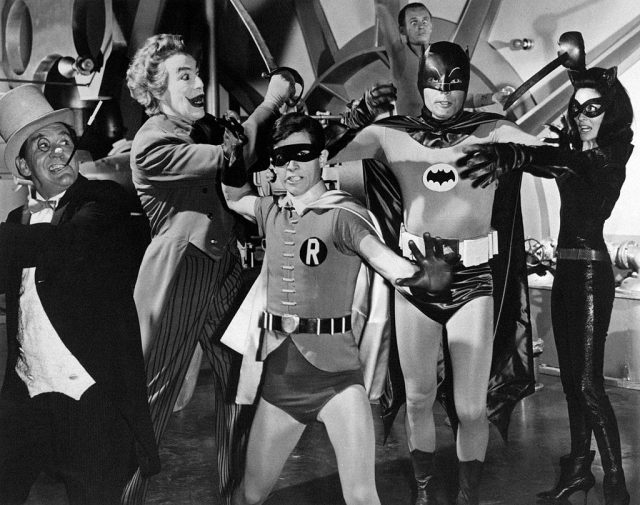 Skidoo (1968) is an obscure movie comedy directed by none other than Otto Preminger. Groucho took the role of God himself in the LSD-themed storyline.

You might be forgiven for thinking this was the set of Batman, starring Adam West. Marx was joined by Burgess Meredith (The Penguin), Cesar Romero (The Joker), and Frank Gorshin (The Riddler). Preminger also made a one-time appearance as Mr. Freeze, enhancing the Bat-mosphere. 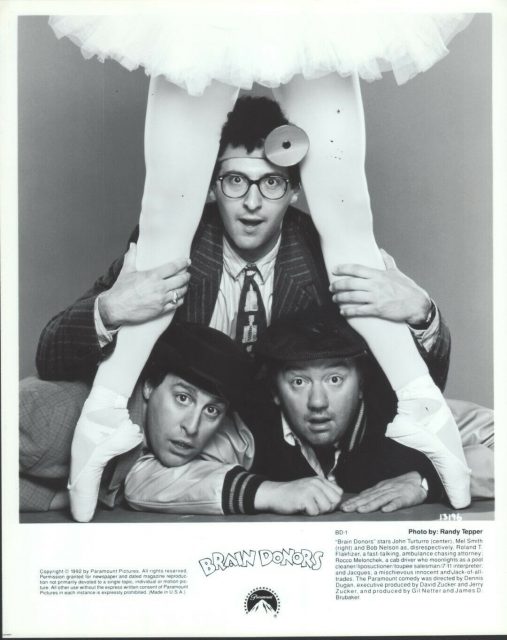 If you think Turturro and co have a touch of the Marx Brothers about them, then you’d be right. While not exactly a remake, the screenplay is reportedly based on A Night at the Opera (1935) and A Day at the Races (1937). 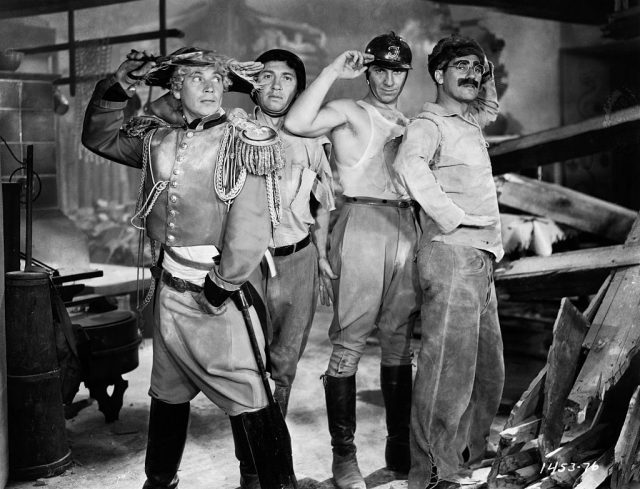 There was just one problem… a real New York town was called Freedonia. The top brass weren’t impressed. Groucho replied: “Our advice is that you change the name of your town.”

More from us: A glimpse into the secret of Laurel and Hardy’s success

The hi-jinks continued six decades on. Mental Floss refers to the prank played on the House of Representatives by Spy Magazine. They caused red faces on the floor by getting them to comment on supposed ethnic cleansing down in Freedonia!