Edgar Allan Poe was a groundbreaking writer who changed people’s perceptions of horror. But there’s far more to him than a miserable-looking soul who gave readers the willies.

Check out our bone-chilling, brain-teasing facts about Poe. And be warned… you may go stark Raven mad… 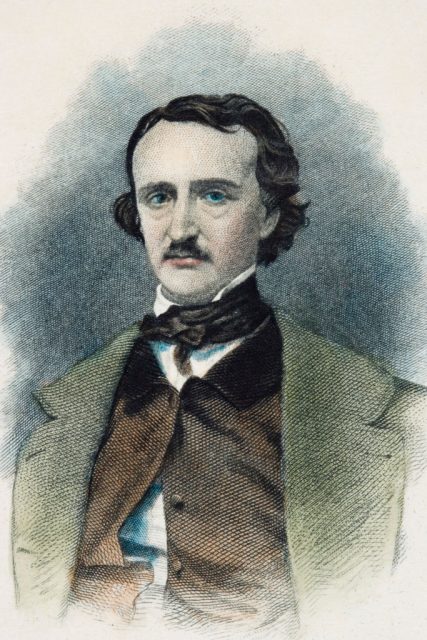 When he wasn’t writing tales of terror, Poe showed his lighter side. As Bustle and other sources note, he sometimes shortened his name to “Eddy.” This was seen in letters of a romantic nature from the Gothic quill-handler.

Edgar Allan Poe was a looker 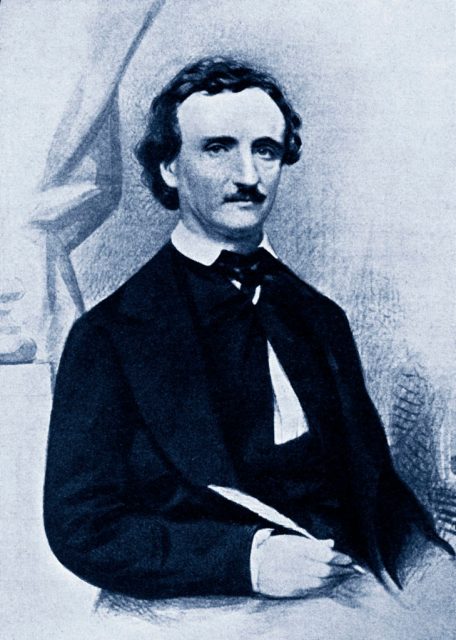 Poe wrote love notes. However, he didn’t rely on the written word alone to pitch woo. Apparently, he was a very attractive man, with eyes that captivated people. 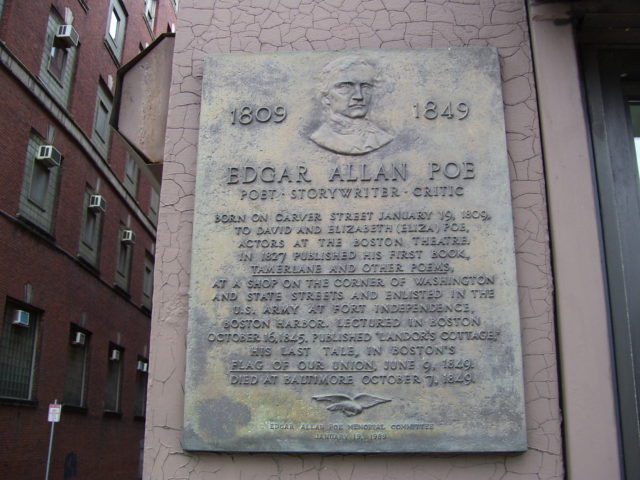 Edgar Allan Poe was born plain old Edgar Poe from Boston in 1809. Well, actually, his background had its fair share of glamour. Father David and mother Elizabeth were actors. They’re thought to have named him after a character in King Lear by William Shakespeare. The young Poe had a brother, William, and a sister, Rosalie.

Edgar wound up alone at three years old. Why? Elizabeth passed away from TB. With David an absentee parent and his siblings elsewhere, the young Edgar was raised by tobacco merchant John Allan and his wife Frances. He then became Edgar Allan Poe.

He served in the army 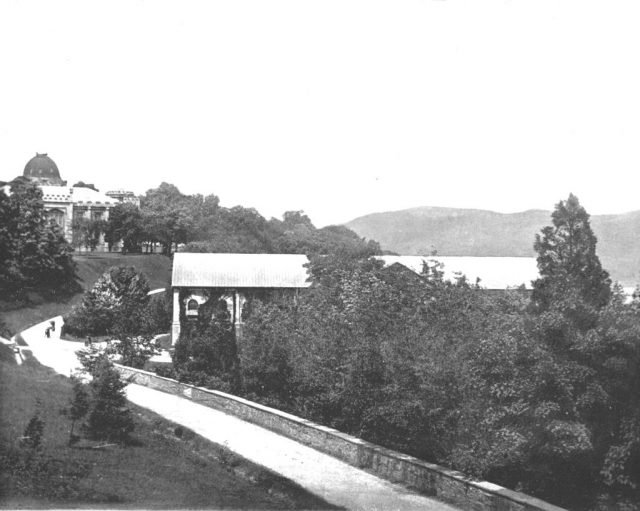 In 1827, Poe signed up with the U.S. Army. According to Biography, he attended the famous academy at West Point but lasted a year. Seems a life of military service wasn’t for him.

He was ahead of his time 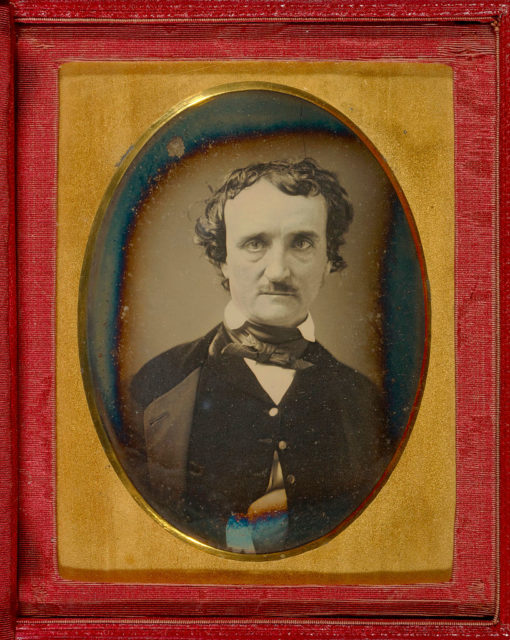 While closely associated with spine-tingling stories like “The Pit and the Pendulum” and “The Masque Of The Red Death” (both 1842), Poe made a deep and lasting mark on writing in general.

ThoughtCo writes that he was “one of the earliest writers of short stories, the inventor of the modern detective story, and an innovator in the genre of science fiction.” For example, “The Murders in the Rue Morgue” (1841) went on to inspire Sir Arthur Conan Doyle, creator of Sherlock Holmes. 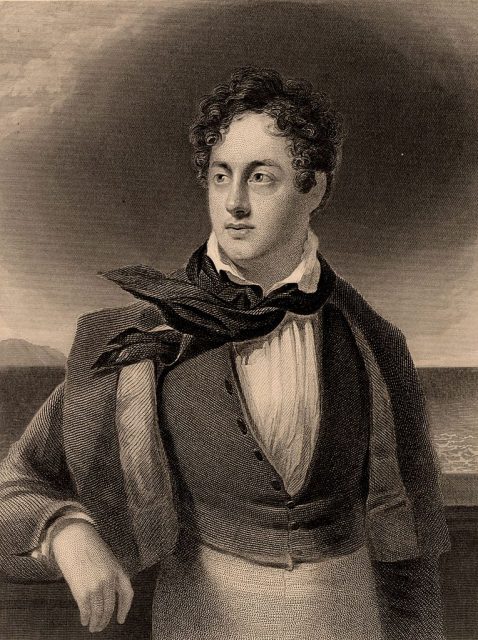 Did Edgar Allan Poe spend his days sitting at a desk, curtains closed, while devoting his life to the craft of writing? Probably not, judging by his idol… Lord Byron.

The infamous poet was a source of hero worship for the young scribbler. Bearing in mind this was a man who was “mad, bad and dangerous to know” (according to Lady Caroline Lamb), it casts an interesting light on Poe the poet.

He married his cousin 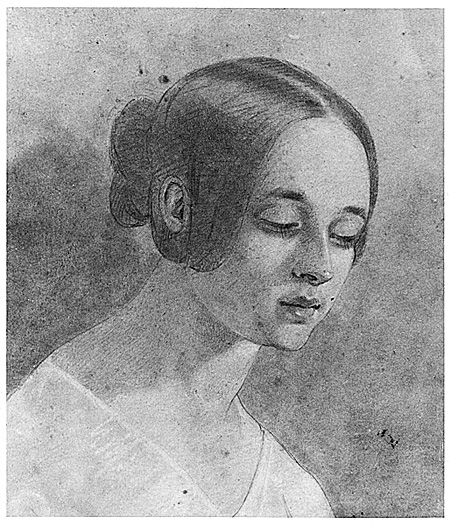 Here’s an eye-opener – Poe’s third wife was his cousin! And she was 13! PastFactory mentions that Poe, then 26, could have bumped up the number on the marriage certificate to 21.

Her name was Virginia Clemm. Tragically, she died a couple of years before her husband in 1847. Like Poe’s mother, she succumbed to TB. 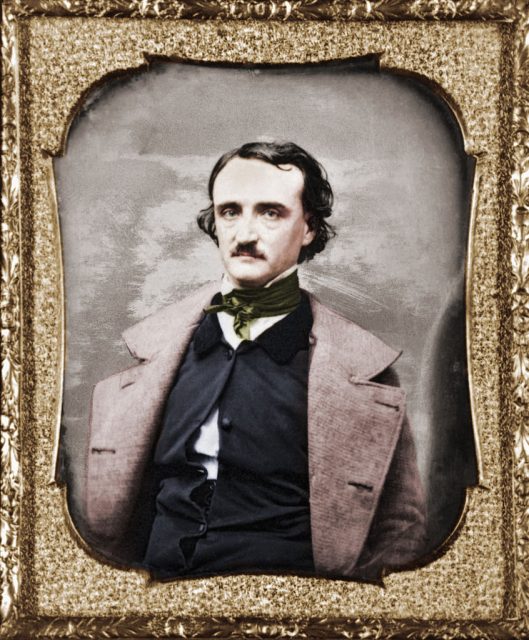 PastFactory refers to Poe’s 1848 prose poem “Eureka.” It “discussed the origins of the universe, and included a cosmological theory that predated the Big Bang theory by an incredible 80 years.”

Poe wasn’t a scientist, but in fairness didn’t claim to be. His workings weren’t exactly flawless. However, he made a notable, and unlikely, contribution to the field. 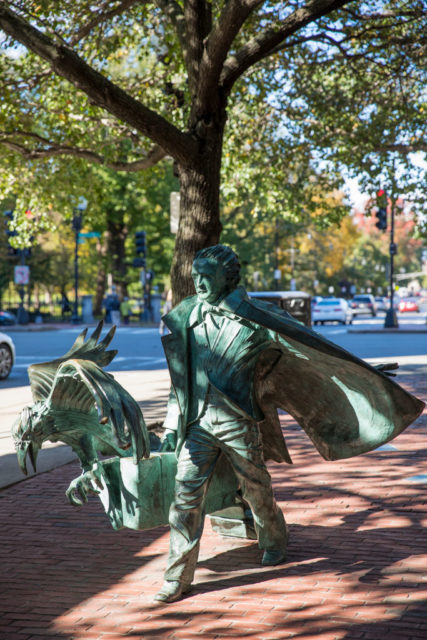 As well as being an artist, Poe was in it to win it. His physical feats could arguably be compared to an Olympian. “When he was fifteen, he achieved local fame by swimming six miles up Virginia’s James River,” writes Bustle. 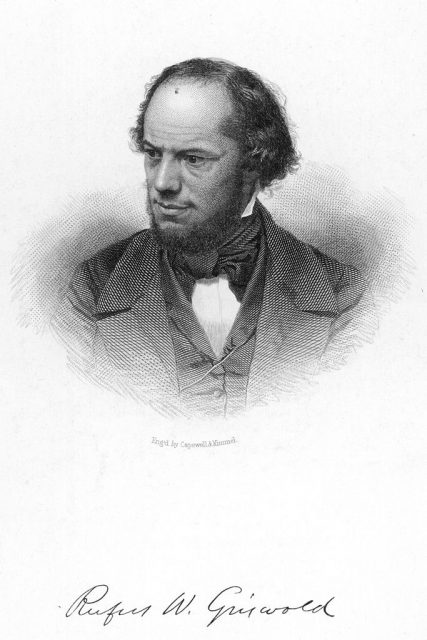 Poe’s fate was sealed by the writer Rufus Griswold, who trashed his reputation after his death. It’s generally believed that Poe enjoyed wine and women while living in a moral vacuum. This happened because of Griswold’s 1850 biography Memoir of the Author. The book was a total stitch-up job.

Griswold appears to have had a grudge. How come? It reportedly stems from Poe’s time as a critic. Revenge is a dish best served cold. In Poe’s case literally, as he was in the ground at the time. 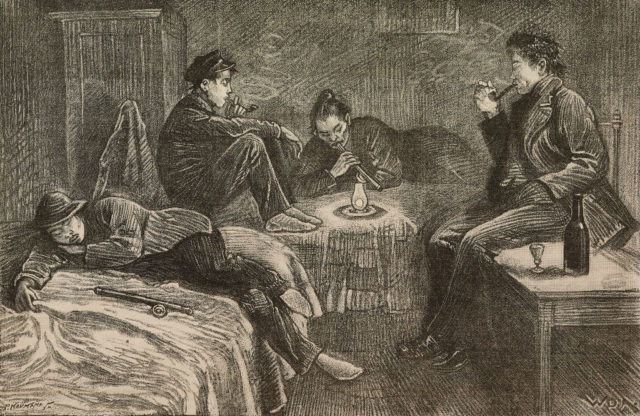 Poe fell foul of another writer in the 1840s. This time it was less intentional. When someone playfully suggested that opium played a role in Poe’s sinister creations, the image of a debauched drug addict stuck.

Apparently, Poe didn’t touch the stuff. Bustle writes that two physicians contradicted the view of him being under the influence. They “never saw any indications of Poe using the drug.” 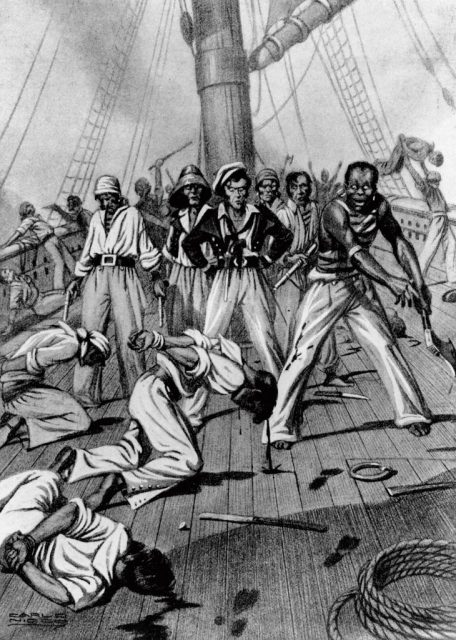 PastFactory highlights grisly circumstances surrounding Poe’s The Narrative of Arthur Gordon Pym of Nantucket (1838). It was the author’s sole novel, and is linked to a shocking story almost half a century later.

Shipwrecked and far from home, a young sailor named Richard Parker was cannibalized by his fellow strandees. Poe’s book also features a character named Richard Parker. He too was a sea-going man. And he too was consumed to stop his shipmates from starving. Is that spooky or what? It’s enough to give anyone indigestion.

Sylvester Stallone has always wanted to play him 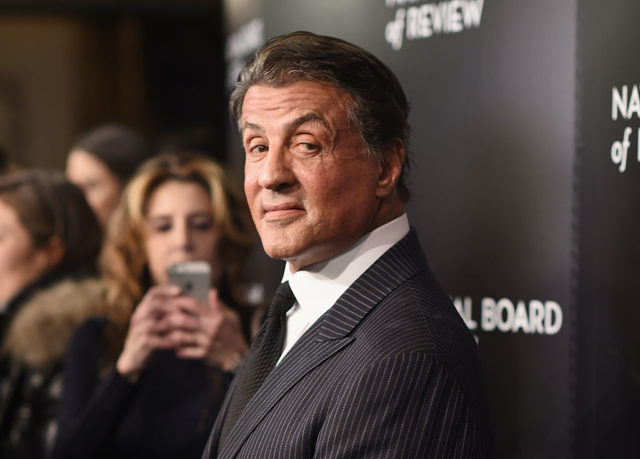 The action star had a Poe passion project in development. On Instagram, he describes it as “The first serious screenplay I ever wrote.” This potential biopic would have starred… who else?… Stallone himself as the famous scribe.

He later realized he “wasn’t really right for the part.” Though if you want to know what a Stallone-infused Poe would have looked like, the actor posted a photo of himself in costume.

Giant Freakin’ Robot reports that Stallone went to Robert Downey Jr. at one point for the title role. 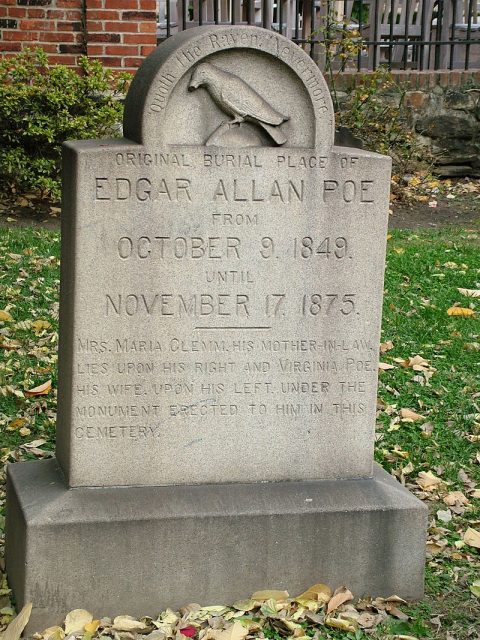 Edgar Allan Poe’s death is worthy of one of his stories. In a downbeat twist, he passed away before his fourth wedding. Elmira Shelton never married Poe. And she never found out exactly what happened to him, either.

History writes that Poe was found in a confused state. He was outside a watering hole in Baltimore and the worse for wear. The author certainly drank a lot, so Griswold wasn’t off the mark there when writing his notorious biography. However, the situation was suspicious.

Poe seemed drunk, and wore “cheap, ill-fitting clothes.” This was unusual conduct for him. Poe went to Washington College Hospital and died a few days later. His last words were reportedly: “Lord help my poor soul.”

Theories about his death 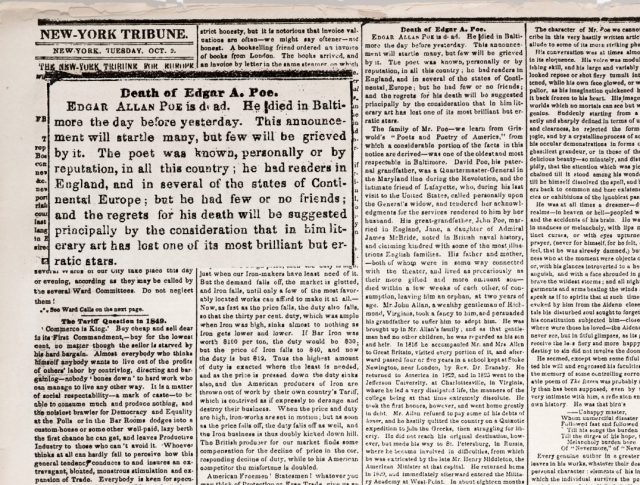 What claimed the life of Edgar Allan Poe? History notes that there are theories “ranging from lesions on the brain, epilepsy and tuberculosis to cholera, syphilis and even rabies.” No death certificate is available to verify the cause.

Was Poe an unfortunate pawn in a cruel political game? His appearance had the hallmarks of a criminal practice called “cooping.” This was where unfortunate men found themselves snatched and dosed up by hired goons. Why? So they could be ferried to polling stations and forced to cast multiple votes.

Poe’s funeral in 1849 was hastily organized and sparsely attended. He was aged just 40.