A pair of Nike training shoes worn by basketball superstar Michael Jordan have sold for a staggering $1.47 million at auction. The sneakers set a record price for game-worn footwear. 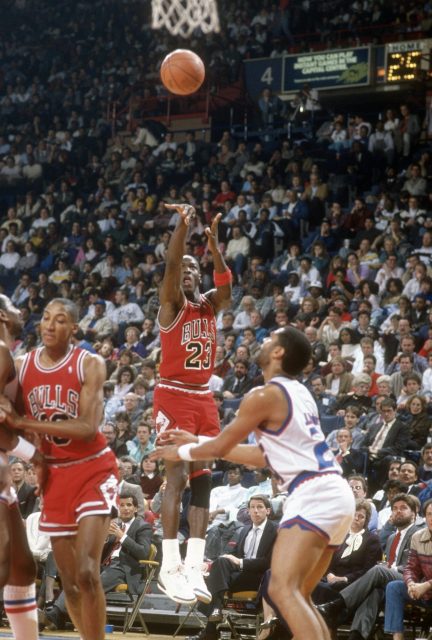 Michael Jordan shoots a basketball over Jeff Malone of the Washington Bullets during a 1988 basketball game. (Photo Credit: Focus On Sport/ Getty Images)

The sneakers in question are a pair of 1984 Nike Air Ships, made of white leather with the iconic Nike swoosh in red. These are the earliest known regular season Nikes played in by Jordan.

According to Sotheby’s, Jordan wore the 1984 Nike Air Ships in his fifth regular-season game as a rookie on the Chicago Bulls. The Bulls visited the Denver Nuggets on November 1, 1984, where rookie Michael Jordan played 33 minutes in the Nike Air Ships and scored a total of 17 points for the Bulls.

The Bulls would ultimately lose to the Denver Nuggets with a score of 129 (Denver) to 113 (Chicago). After the game, Jordan signed and gifted his Air Ships to Denver Nuggets ball boy, ‘TJ’ Lewis.

The sneakers sold this past weekend for a total of $1,472,000 at Sotheby’s luxury sale in Las Vegas, making them “the most valuable sneakers ever offered at auction.” Prior to the auction, the shoes had been estimated to sell for between $1 million and $1.5 million.

#AuctionUpdate The most valuable sneakers ever offered at auction—Michael Jordan's regular season game-worn Nike Air Ships from 1984—have just sold at $1,472,000 in our luxury sale in Las Vegas. #SothebysxMGM pic.twitter.com/OlxvZ1ETML

The autographed trainers were bought by a well-known collector named Nick Fiorella, who also bought a  Luka Doncic trading card for $4.6 million in February of 2021.

Despite being the most expensive sneakers sold at auction, the 1984 Nike Air Ships are not the most expensive trainers ever sold. In April 2021, a pair of Nike Air Yeezy 1s worn by rapper Kanye West sold for $1.8 million. This transaction was through a private sale rather than a public auction.

More from us: Unanswered Questions in the Tragic Fate of Michael Jordan’s Father

The value of objects associated with Michael Jordan have skyrocketed since the release of the ESPN/ Netflix documentary, The Last Dance, in April 2020.

« From A Drunken Moose To An Elephant Buried Under The Vatican: Ten Beloved Pets From History
Boogie One Hit Wonderland! Remember These Standalone 1970s Hits? »