Over the years, Dolly Parton has created a style all of her own. When people have tried to tell her how to look, she’s been adamant in maintaining her independence and personal image.

Even though she’s now 76 years old, you’ll never catch Dolly Parton looking less than stunning in front of the cameras. Check out some of the beauty tips she’s given out as her career has gone from strength to strength.

Be ready for any emergency by sleeping in your make-up

Dolly has said that it takes her around 15-20 minutes to do her make-up and also that she won’t leave home with a “bare face.” So what happens if you sleep in or get woken in the middle of the night?

Simple – sleep in your make-up. That way, if you’ve got an unexpected visitor or need to head out without notice, you’ve got your face on. And if nothing crops up, just remove your make-up as part of your normal morning skincare routine. 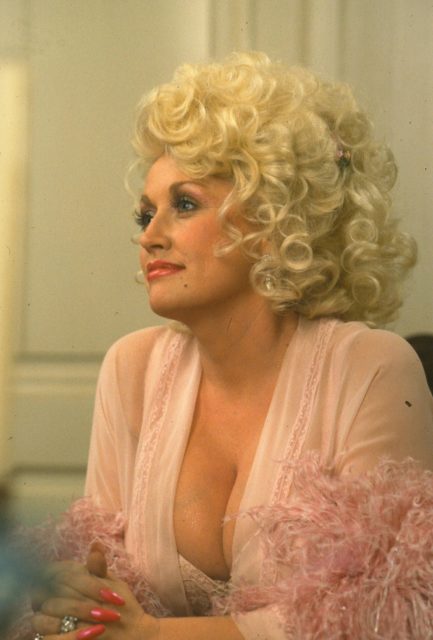 Dolly wearing a nightgown in a scene from ‘The Best Little Whorehouse in Texas’ (Photo Credit: RKO Radio Pictures & MovieStillsDB)

You can turn everyday items into make-up

While Dolly has said that she tries every new product that she can to see if it’s a good match for her, she’s also admitted that anything can be make-up if you turn your mind to it.

“Until I was a teenager, I used red pokeberries for lipstick and a burnt matchstick for eyeliner. I used honeysuckle for perfume.”

Burnt matchsticks can also have another purpose, and Dolly explains how to use one correctly: “I always had a beauty mark, but I would also make it darker. So a burnt match was good. You’ve got to spit on it after you’ve burnt it.”

In place of face powder, she would use flour but warns: “You’ve got to be careful though, because if you get hot you’ll break out in little biscuits.” 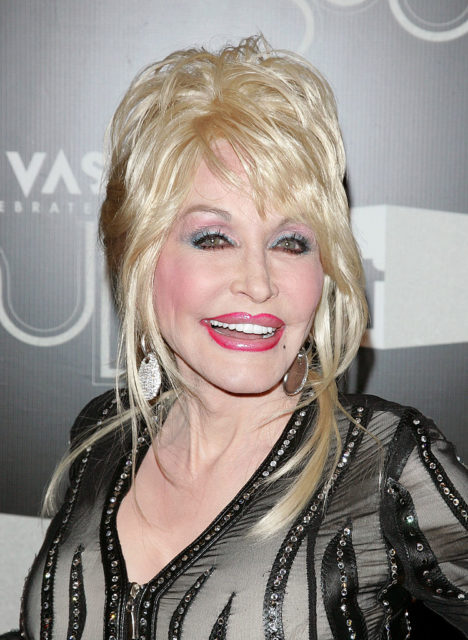 That’s right – anytime you see pictures of Dolly, she’s wearing a wig. Of course, she still takes care of her natural hair, but a wig means she looks picture-perfect every time.

“My own hair is so flat and fine. I could never make it do anything – that’s why I wear wigs,” Dolly explains, before adding, “I think God gave me talent because he screwed up my hair.” Dolly has said that she owns 365 wigs, one for every day of the year, and we’re certain she’s not joking. 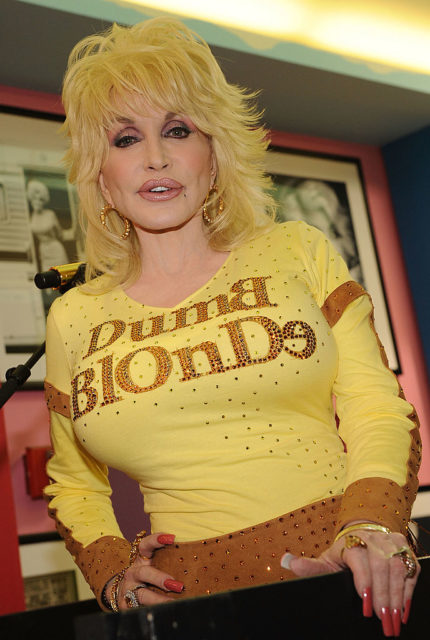 Most celebrities are on one diet or another to keep their figure sleek, but not Dolly. She puts her great figure down to keeping active rather than watching what she eats. In fact, according to various websites, she has nothing good to say about diets.

As well as saying that she fell off diets “because of potatoes and gravy of some sort,” Dolly has also been quoted as saying: “My weaknesses have always been food and men – in that order.” 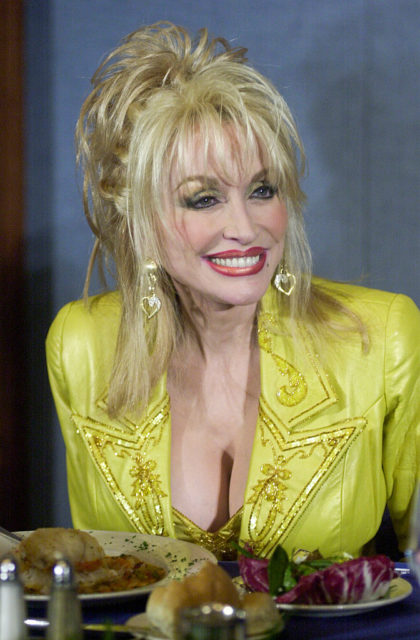 Country singer Dolly Parton speaks during a luncheon address at the National Press Club in Washington DC, where she discussed “Imagination Library,” her 5-year-old program that has given away 150,000 books to children. (Photo by Stephen J. Boitano/LightRocket via Getty Images)

Make your own exercise routine

Being active doesn’t mean that you need to shell out a fortune going to the gym. Instead, Dolly has her own simple workout guide.

“I just put on music or sing gospel songs and do my own kind of workout – shouting and stretching and praising… I do a few little floor exercises now and then, a few little squats.”

Of course, it adds a sense of style if, like Dolly, you can get yourself a pair of rhinestone-encrusted sneakers. 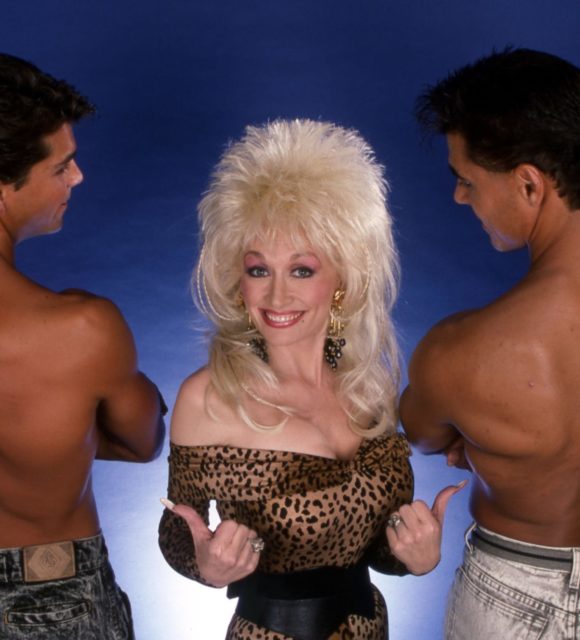 Long nails can be the secret to good music

When writing a song, Dolly’s fabulous nails are integral to the process.

“My nails are my rhythm section when I’m writing a song all alone. Some day, I may cut an album, just me and my nails.” 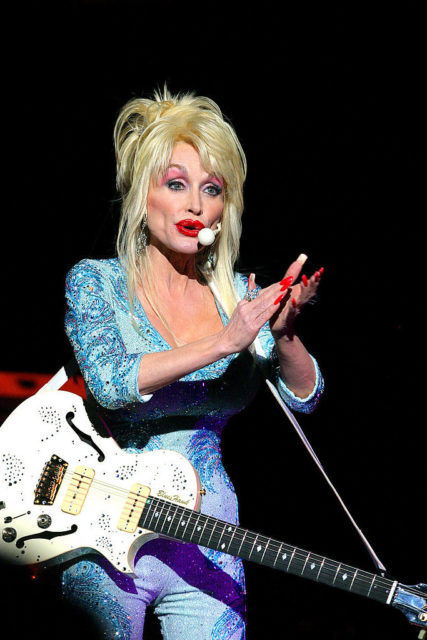 Many celebrities try to hide the fact that they’ve had surgery or Botox injections, but not Dolly.

When people comment on how happy she looks, she replies: “That’s the Botox.” She even goes so far to illustrate its benefits: “Thanks to Botox and fillers, as well as the work that I’ve already had, my face pretty much maintains itself.”

At the end of the day, Dolly sees Botox as just part of the skincare routine, and she’s happy with the way she looks. “I’m comfortable in my own skin, no matter how far it’s stretched.” 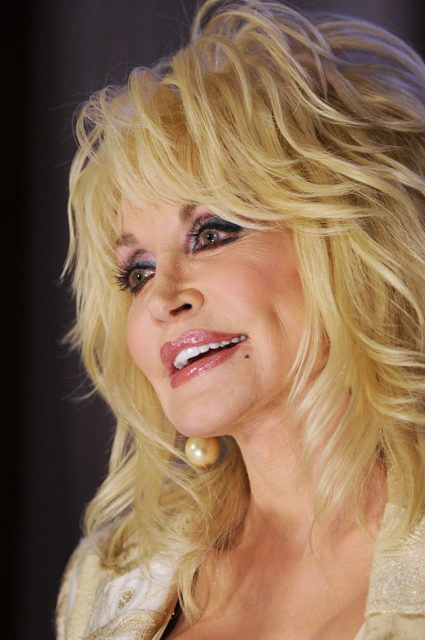 When it comes to style, don’t be afraid to be yourself

While the world has come to view Dolly as both glamorous and charming, she has admitted in interviews that she actually styled her iconic look on a tramp she saw around town. 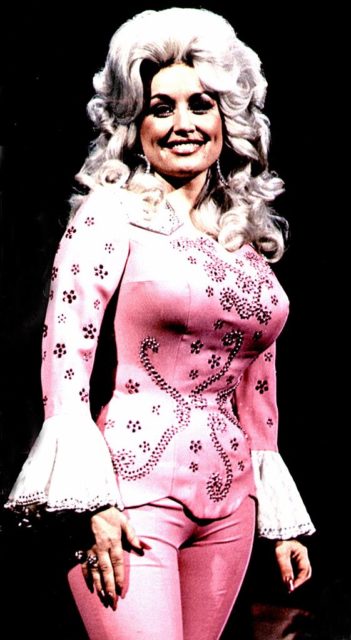 “I was kind of influenced by this town tramp. She used to walk down the street, and she had all this yellow, bleached hair, red lips, and real tight clothes. When I was little, I used to just love her and when I would go to town, I would say, ‘Isn’t she beautiful?’ And people would say, ‘Oh, she ain’t nothin’ but trash.’ And I said, ‘That’s what I want to be!’”

« Marni Nixon Has the Most Recognizable Voice in Hollywood, Yet We Just Learned Her Name
Helen Mirren Believes Queen Elizabeth II Watched Her 2006 Movie, ‘The Queen’ »