A miniature 15-page book of poetry written by 19th century English author Charlotte Brontë has been purchased for $1.25 million by British non-profit Friends of the National Libraries. The organization plans to donate it to the Brontë Society, in Haworth. 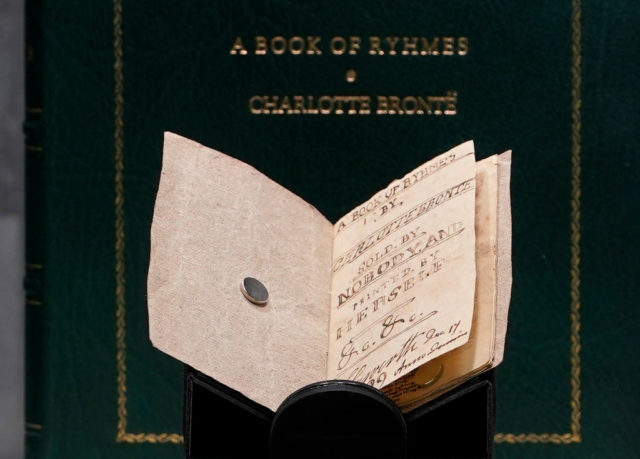 A Book of Ryhmes , the unpublished work of poetry by Charlotte Brontë, sold for $1.25 million at an auction in New York City. (Photo Credit: TIMOTHY A. CLARY / AFP / Getty Images)

The book, titled A Book of Ryhmes  [sic] by Charlotte Brontë, Sold by Nobody and Printed by Herself, was written in 1829, when Brontë was just 13 years old. Measuring only 10 centimeters by six centimeters, it is considered the most valuable literary manuscript ever sold.

During their childhood, Brontë and her siblings, Anne, Branwell and Emily, wrote miniature books for their toy soldiers and sewed them together from scraps of wallpaper, sugar packets and bits of paper. They were filled with poems and short stories.

The children grew up in a literary home, so it’s no surprise they were able to create such imaginative tales. These later led to such works as Brontë’s Jayne Eyre, Anne’s The Tenant of Wildfell Hall and Emily’s Wuthering Heights, all of which have since become literary classics. 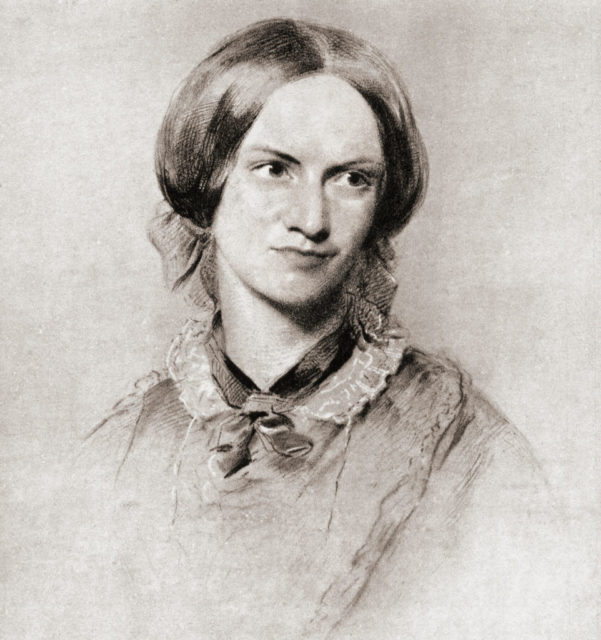 The titles of the poems have long been known to historians, thanks to Brontë’s personal catalogue, but have never been transcribed, published, summarized or photographed. The book was last seen at auction in 1916, when it was sold in New York City for $520 (approximately $13,000 today). It disappeared soon after and its whereabouts remained unknown until recently.

Prior to becoming an author, Brontë wished to be poet, but was advised against launching a literary career by poet laureate Robert Southey, who wrote to her, “Literature cannot be the business of a woman’s life: and it ought not to be.”

In the table of contents of A Book of Ryhmes, Brontë gives credit to imaginary authors “Marquis of Duro” and “Lord Charles Wellesley,” before writing the disclaimer, “Actually written by me.” On the back of the title page, she inscribed, “The following are attempts at rhyming of an interior nature it must be acknowledged but they are nevertheless my best.” 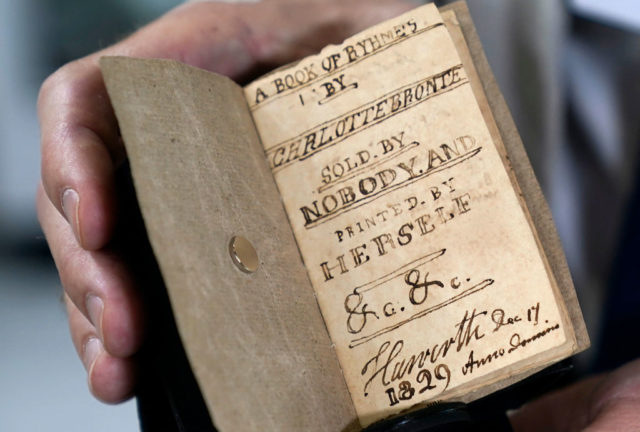 The title page of A Book of Ryhmes, a collection of poems written by Charlotte Brontë when she was just 13 years old. (Photo Credit: TIMOTHY A. CLARY / AFP / Getty Images)

The miniature book was sold at the New York International Antiquarians book fair. After learning about its impending sale, the Friends of the National Libraries secured enough funding to purchase it. It will be donated to the Brontë Society, which has the largest collection of the author’s manuscripts in the world. The museum already has nine little books, with seven more being donated by the Honresfield Library

Speaking about the donation, Anne Dinsdale, Principal Curator at the museum, said, “We are absolutely thrilled to be the recipients of this extraordinary and unexpected donation and wish to thank the generosity of the Friends of the National Libraries and all of the donors who have made it possible.

“It is always emotional when an item belonging to the Brontë family is returned home and this final little book coming back to the place where it was written when it had been thought lost is very special for us.

“Visitors of the museum love seeing these little books and we know how inspiring they are to so many,” she added. “Sharing the newest addition to the collection later this year is something we very much look forward to.” 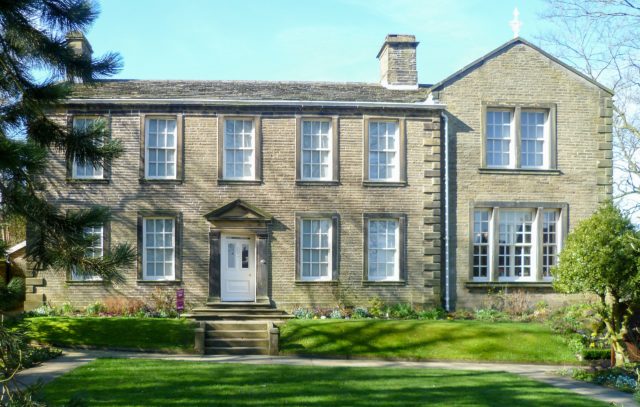 The Brontë Parsonage Museum, home of the Brontë Society. The museum is housed in the residence the Brontë family lived in, in West Yorkshire. (Photo Credit: DeFacto / Wikimedia Commons CC BY-SA 4.0)

More from us: The Real-Life Men Who Inspired the Character of James Bond

According to the Brontë Society, A Book of Ryhmes will be put on public display and digitized, ensuring the poems can be accessed virtually by readers worldwide.

« The Original ‘Pinocchio’ Ending Is What Nightmares Are Made Of
10 Historic Photos and Their Crazy, Creepy Backstories »