When we think of mummies, we might envision kings, pharaohs, and others with wealth being wrapped in cloth and buried in bedazzled coffins. Well, this was not always the case. Some mummies were preserved for reasons unknown, though their deaths can sometimes be determined by the state of their bodies. For two male mummies found in South America and currently stored in Europe, the truth is that their deaths were the result of gruesome murders, with evidence that’s been preserved for centuries.

The benefits of studying mummies vs. not skeletons 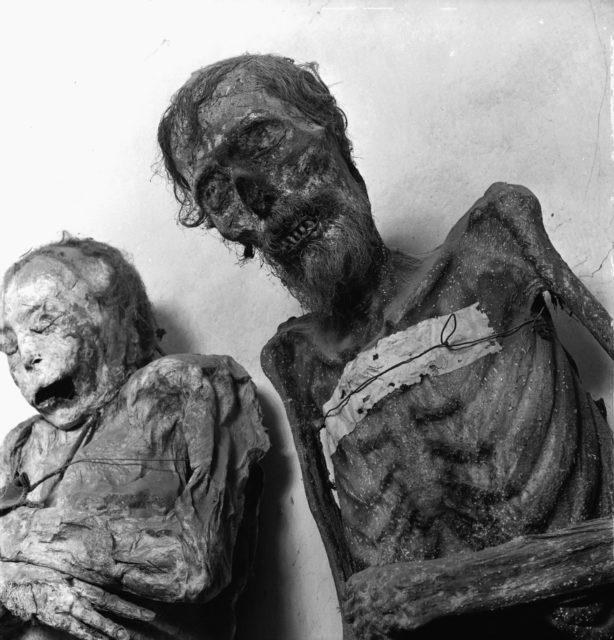 Different types of artifacts can provide a wealth of information about ancient people. Skeletons are great because they have the ability to show researchers signs of trauma or possible surgeries that may have happened, but they also have their downfalls when it comes to research.

Artifacts like mummies, with preserved soft tissues such as organs or skin, can provide a lot more detail than skeletons. Mummies act almost as a treasure map in recreating the lives of the people before they died. Much information is lost when only the skeletons of ancient persons are preserved.

The Chilean mummy is being housed at the “Museum Anatomicum” at the Philipps University Marburg in Germany. Andreas G. Nerlich, a professor at the Department of Pathology of Munich Clinic Bogenhausen, and his colleagues were able to discover some interesting facts about the ancient mummy using highly sophisticated, non-invasive scanning technology.

It was discovered that this male mummy was quite young when he died, somewhere between 20 and 25 years old. When he was buried, items were interred with him that suggest he was part of a fishing community somewhere in northern Chile. By analyzing his teeth, Nerlich and his colleagues were able to deduce that he had a diet that was predominantly maize and noticed that his lungs suggested signs of tuberculosis. But that was not what killed him.

The Chilean mummy was found to have suffered a critical blow to the head and a stab in the back. The trauma suggests that he did not die naturally, but was murdered. The reason and culprit are unknown, but radiocarbon dating suggests that he was killed sometime between 996 and 1147 CE.

The investigation of mummified remains from a thousand years ago reveals that these South American males were brutally murdered. https://t.co/kCgXNG4X9q

The Peruvian mummy is being housed in the collection of the Art and History Museum of Delémont in Switzerland. This mummy was also a male, and is believed to have been originally from a volcanic region of southwestern Peru, likely part of the Arequipa region. When he was found, he was dressed in garments that were made from cotton and the hair of llamas or alpacas, and the hairs of rodents in the chinchilla family called vizcachas.

This man appears to have suffered from arteriosclerosis when he was alive, but again, this was not what killed him. He too was a victim of murder. The Peruvian mummy died from a strike to the cervical spine. This is the spot located at the top of the spinal cord, including the neck and connecting the skull. The blow is believed to have killed him between 902 and 994 CE.

Although we may not know much about their lives while they were living, we do know that both of these men suffered painful deaths at the hands of murderers.

There was a third mummy found alongside the Peruvian male mummy, but this one was a female. She showed no signs of trauma and likely died a much more peaceful death resulting from natural causes. She seems to have died much later than the male found in the same region, appearing to have passed away only 800 years ago.

The discovery of these mummies and their male mummies’ causes sheds light on violence in the ancient world.