The 1,000-Year-Old Remains of a ‘Petrified’ Man Unearthed in Peru

When archaeologists from the National University of San Marcos set out to begin excavating in Cajamarquilla, an archaeological site located just 15.5 miles inland from the coastal and capital city of Lima, Peru, they had no idea they were about to make an incredible and valuable discovery. Beginning their project in October 2021, approximately 40 people began digging in search of artifacts, and it wasn’t long before they hit the archaeological jackpot. 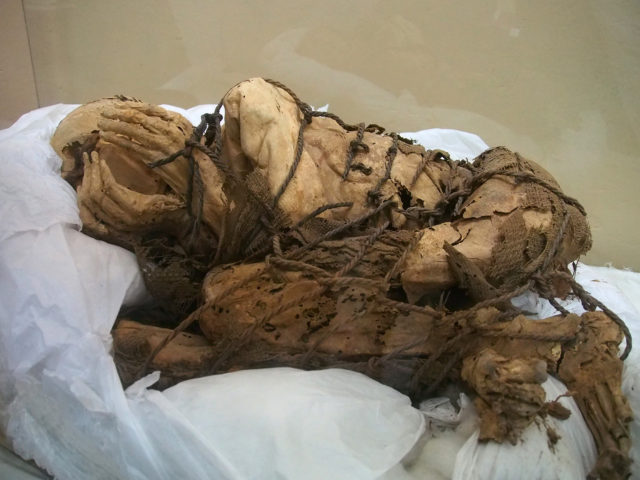 Adult mummy on display, presented to the press at the Royal College of the National University of San Marcos by a team of archaeologists from the same university. (Photo Credit: Carlos Garcia Granthon / Fotoholica Press / LightRocket / Getty Images)

During the excavation, archaeologists were unsure of what exactly they would find and certainly did not predict locating the valuable artifact they soon unearthed in the tomb. Easily the most incredible discovery of the excavation was a mummy in near-perfect condition. The entire body was well-preserved and is unmistakably the remains of a human.

Not quite what you would expect a mummy when you think of what a mummy looks like, assistant professor of Latin American history at Pennsylvania State University, Christopher Healey explained how “artificially preserved mummies from the Andies don’t look like mummies from Egypt.” Instead, these mummies would be wrapped in layers of leather and cloth to form little bundles that were placed in a crouched position.

The position that the mummy was found in is a bit creepy to see today but was actually very common for funeral rituals during the height of the Huari civilization. The body was wrapped in cloth and was bound by rope in a fetal position. The strangest part was that the hands were covering the face. What looks like a painful death for the mummy was actually a position created by those caring for the funeral, a ritualistic practice for the dead.

What we’ve learned about the find 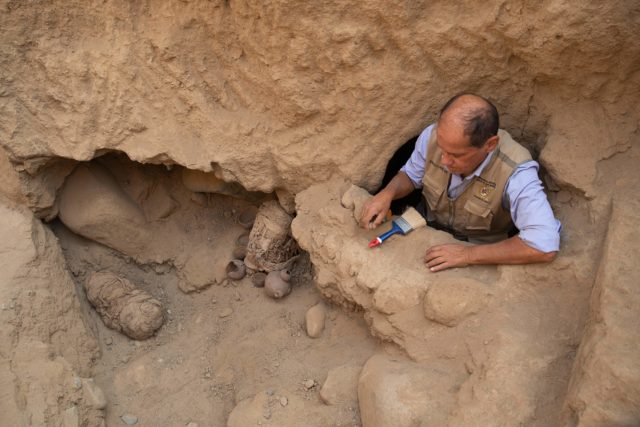 While examining the body of the mummy, archaeologists determined that the specimen was a man, aged somewhere between 25 and 30 years old. It has also been determined that this particular man must have been one of importance in his society, as not everyone would have been buried with the same care as he was.

The location of Cajamarquilla allowed it to become a thriving city where coastal and mountainous people could gather to engage in trade. As such, researchers believe that the mummy they found here was the son of a wealthy merchant. This is further supported by the other artifacts that were found in the tomb with the mummy. By comparing the burial practices to that of the Lord of Sipán, the mummy of a ruler from 1,700 years ago previously found in Peru with similar burial patterns, researchers have been able to understand this man’s social status with more clarity. 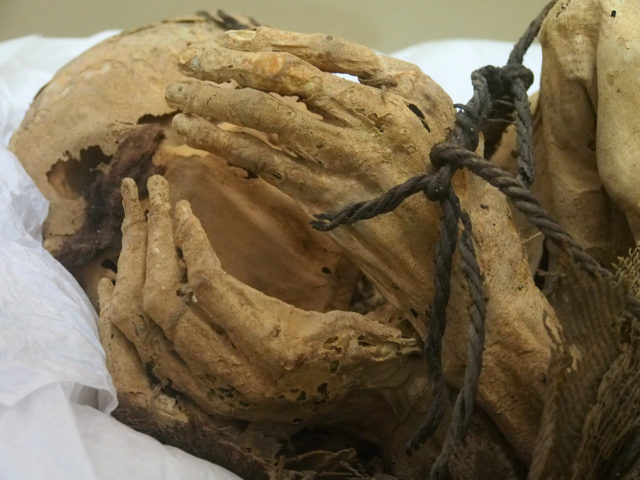 Hands detail of an adult mummy on display, found in the Cajamarquilla Archaeological Complex were presented to the press at the Royal College of the National University of San Marcos. (Photo Credit: Carlos Garcia Granthon / Fotoholica Press / LightRocket / Getty Images)

The Andean region was home to many different cultures, all of which practiced different mummification processes based on their location. Depending on the area, mummification could be achieved by desiccation, or freeze-drying, caused by the natural climatic conditions of the desert or mountains where the mummification process was taking place. It could also be achieved by using alcohol or salt, aided by the removal of flesh and bodily fluids from the corpse to achieve the desired result.

Also in the tomb 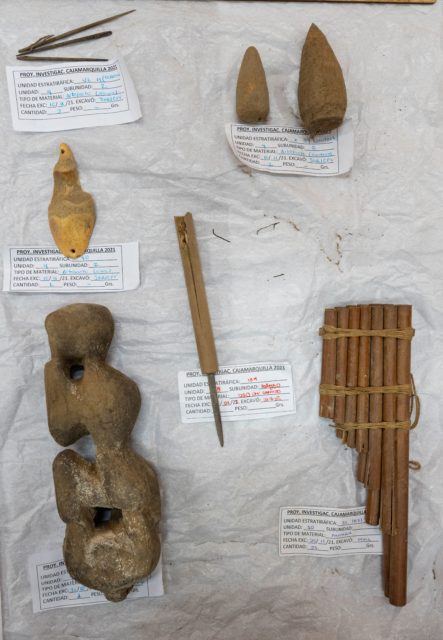 Found alongside the mummy in the tomb were other important artifacts that have helped to illuminate the ways of the past. Various vegetable remains and the remains of animals such as dogs, guinea pigs, and llamas were found in the tomb, as well as primitive musical instruments, suggesting that visitors attended the tomb for years following the man’s death.

One of the head archaeologists of the excavation, Pieter Van Dalen Luna, said, “for them, death was not the end, but rather a transition to a parallel world where the dead lived. They thought that the souls of the dead became the protectors of the living.” This knowledge has allowed archaeologists to understand why sea mollusk remains were also found at the tomb. Located relatively close to the coastline, the tomb would be littered with sea mollusk offerings by the living. 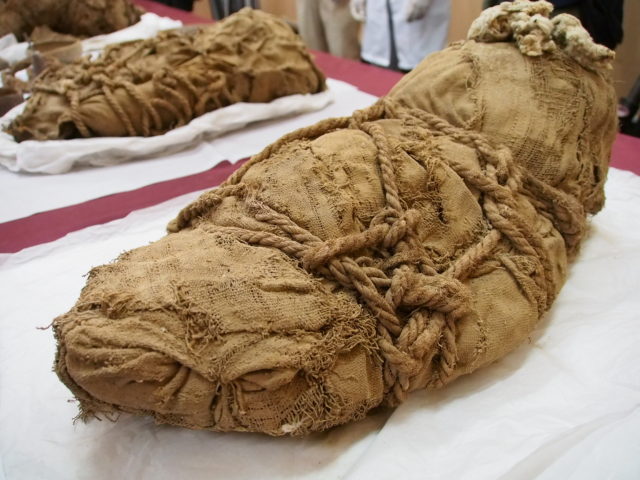 Funerary bundle on display of a recently found child mummy. Twenty mummies of children and adults, possibly sacrificed, found in the Cajamarquilla Archaeological Complex were presented to the press at the Royal College of the National University of San Marcos. (Photo Credit: Carlos Garcia Granthon / Fotoholica Press / LightRocket / Getty Images)

The archaeologists also found eight children and 12 other adults that were found outside the tomb of the mummy. It is believed that these bodies were sacrificed in an ancient, pre-Hispanic ritual to go alongside the burial of the mummy. The bodies of the children were found wrapped in funerary bundles and the adults were in the form of skeletons, not having undergone a mummification process.

Conclusions about the sacrifice of these 20 bodies came from a comparison of the Lord of Sipán as well, who was also discovered with the remains of children and adults who were sacrificed to be buried alongside him. 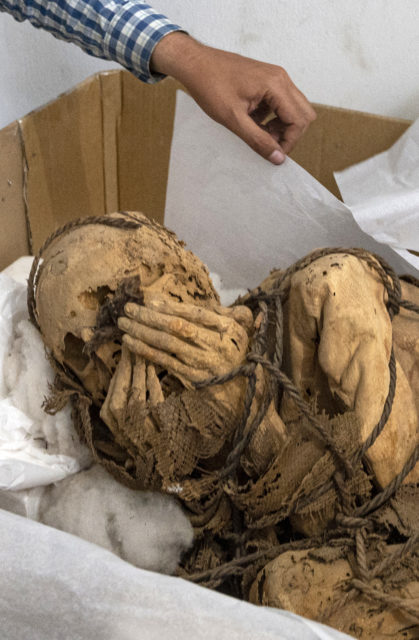 The discovery of the mummy in this condition was incredible. Co-head of the excavation, Yamira Huamán Santillán, said, “the whole team was really happy because we didn’t think that was going to happen.” Their findings were more than they had hoped for, and it has helped us gain a better understanding of the pre-Hispanic period.

The mummy, now named “Chabelo,” as well as the remains of the eight children and 12 adults, were moved from the tomb and put on display at Lima’s San Marcos University in Peru. Along with them, the different food remains, instruments and other artifacts have been placed on display. The exhibit is now public so that those who are interested in catching a glimpse into pre-Hispanic culture can view this haunting discovery for themselves.

« Revisiting the ‘Satanic Panic’ of the 1980s
Who Was Mae Capone, the Wife Of Mobster Al Capone? »