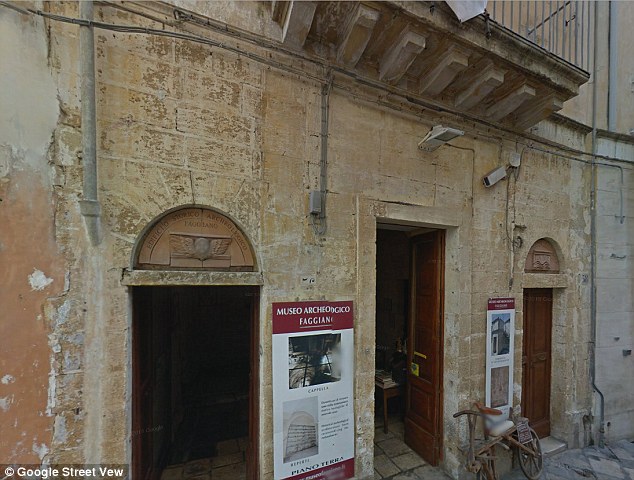 The entrance of the building in Lecce, #56 Via Ascanio Grandi street / Photo credit: Google Street View

A simple maintenance work as locating and fixing a broken sewage pipe may lead you to treasures and antiquities, especially if you live in a town in Italy, where in almost every piece of land there is a roman treasure buried.

Lucian Faggiano bought an old building in the city of Lecce, located in the region of Puglia, South Italy and was planning to turn it into a nice trattoria – a traditional Italian eating establishment that is less formal than “ristorante”  – But the refurbishing was stopped and his plans changed when he noticed that the toilet is blocked. You can not have a restaurant without a functioning toilet, that is a golden rule.  While Lucian was digging up the broken sewage pipe, he found a different “problem.” There was a 2000-year-old Messapian tomb, a Roman granary and a Franciscan chapel buried under his restaurant. Besides this, there were also etchings in the stone thought to be carved by the Knights Templar. It seems like time travelers did something wrong beneath this building. 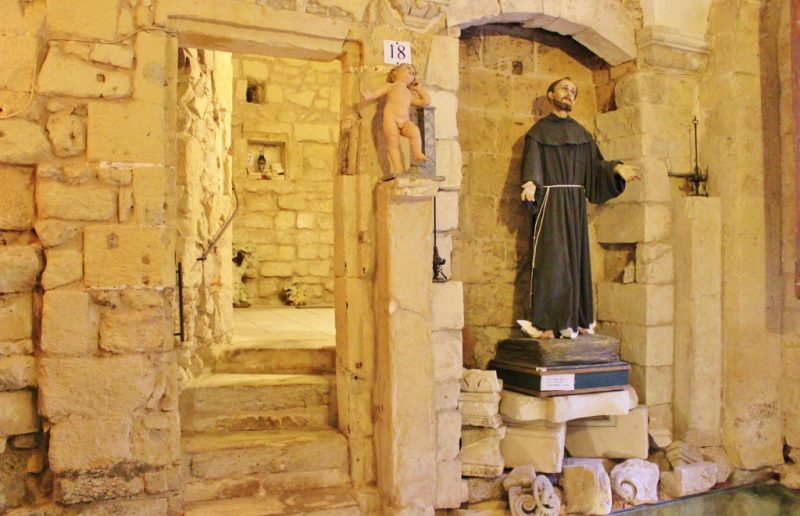 The interior of the Faggiano Museum

Finding something like this somewhere else in the world may sound strange, but not here. Lecce is an old city with a lot of history dating back to ancient times. According to legend, a city called Sybar existed at the time of the Trojan War, founded by the Messapii. Messapians or Messapii were an Indo-European tribe that used to live on the south-eastern peninsula, on the “heel” of Italy. The true origin of the Messapii is debated. The most credited theory is that they came from Illyria as one of the Illyrian tribes who settled in modern Apulia.

Lecce was conquered by the Romans in the 3rd century BC, receiving the new name of Lupiae. Under the emperor Hadrian (2nd century AD), the city was moved 3 kilometres (2 miles) to the northeast, taking the name of Licea or Litium. Lecce had a theater and an amphitheater and was connected to the Hadrian Port (the current San Cataldo port). Orontius of Lecce, locally called Sant’Oronzo, is considered to have served as the city’s first Christian bishop and is Lecce’s patron saint. Lecce was also an important trading post for the Romans and a crossroad point in the Mediterranean Sea, because of its convenient location, at the tip of the heel of Italy’s “boot.” 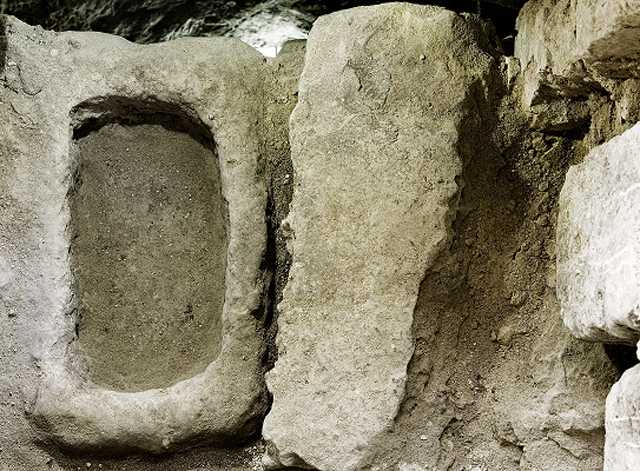 Severo Martini, a member of the City Council of Lecce stated that “Whenever you dig a hole in the city, centuries of history come out”.

When Mr. Faggiano and his sons continued digging further, layer upon layer of history was slowly beginning to reveal itself. First they hit a layer of medieval stone and beneath it the Messapian tomb was found. When they continued further, they discovered an entrance to small chamber that turned out to be a Roman room used to store grain.  The basement of a Franciscan convent was also discovered. The basement was probably used by the nuns for preparing bodies for funerals. 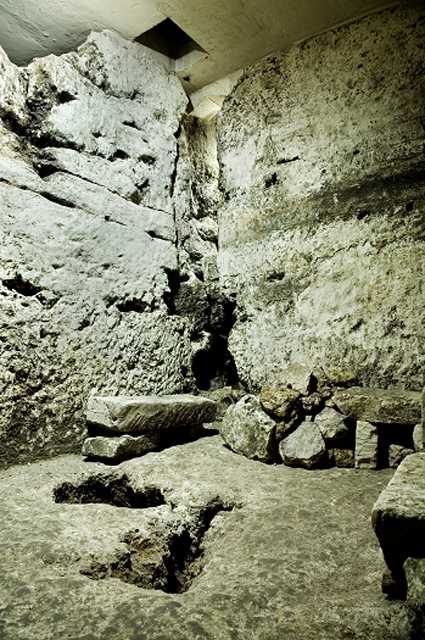 The basement of the Franciscan church / Photo credit: Faggiano Museum

Mr. Faggiano became obsessed with his treasure. He probably felt like Indiana Jones, but at the same time he was afraid of how much will this delay cost him and his unfinished restaurant. At the beginning, he kept the whole thing secret, mostly from his wife, because probably he didn’t want her to find out that he let his 12-year-old son Davide go down through the floor gaps and see what lays ahead.

His wife, Anna Maria noticed that the clothes they bring back home are too dirty for a simple sewage pipe repair. Soon, she found out about her husband’s “little” secret. The huge amounts of dirt and gravel that were being taken out from the restaurant were also suspicious.

When the neighbours and city officials heard about Faggiano’s “little archeology project”, investigators were called and they shut down the site. Mr Faggiano was warned that he was doing an illegal dig.

After everything was legally put in order, the work on the site continued but this time, overseen by trained archeologists. Many artefacts and valuable items were found during the dig: roman bottles used during rituals, ancient vases and a magnificent ring engraved with Christian symbols. Hidden frescos were also found together with more (medieval) artifacts. 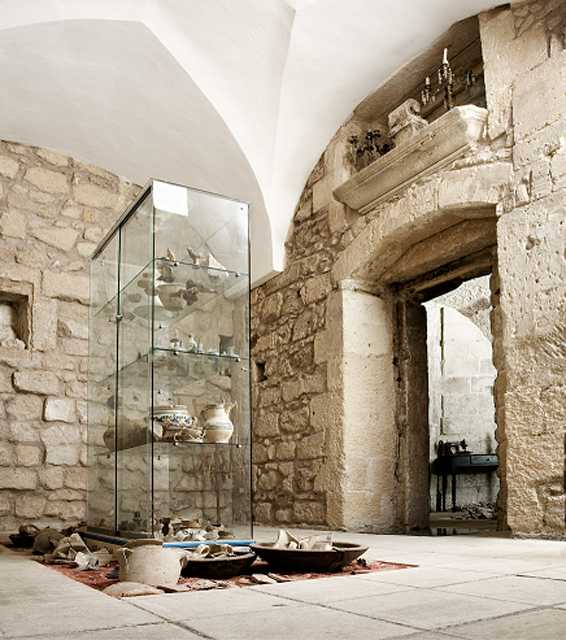 Some of the artifacts found inside the chambers are exhibited in the house museum / Photo credit: Faggiano Museum

A local cultural heritage expert, Giovanni Giangreco, who was part of the excavation team said: ‘The Faggiano house has layers that are representative of almost all of the city’s history, from the Messapians to the Romans, from the medieval to the Byzantine time.”

The Faggiano family realised the importance of the archeological site beneath their property and besides their wishes to open a restaurant, allowed the officials to continue with the excavation. Mr Faggiano admits that at one point he was tired of all the attention and the constant bothering, he wanted to take cement and cover everything up as it was at the beginning. Luckily, he didn’t do it (and he probably wouldn’t be allowed to do that).

Today, eight years after these events, this amazing building that is full of history, from its foundations up to the roof, has been turned into a museum which is opened for visitors. Mr. Faggiano opened the doors of his building, but not for serving meals. For a certain fee, you are allowed to enter the underground chambers and experience Lecce  from a different perspective.

Eight years after it was meant to be opened as a restaurant, the incredible building has been turned into Museum Faggiano  allow visitors to travel down through time to visit the ancient underground chambers.

« Streamliners: the Most Beautiful Trains Ever Designed…
The Library of Trinity College in Dublin: A 300-year-old institution, home to over 200,000 books »