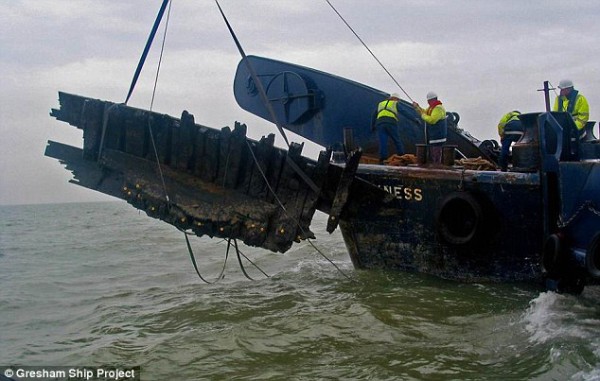 In the late 1500’s an English chartered company, The Levant Turkey Company, petitioned Queen Elizabeth I for a charter to guarantee exclusive rights to trade with Turkey and the Levant, on the eastern shores of the Mediterranean Sea.  At the same time England became a Protestant state and no longer accepted the Pope as the head of the church.  This antagonized Spain, which was still a Catholic nation. When in February of 1587 Elizabeth I had Mary, Queen of Scots, beheaded, Philip II lost all patience with England and relations between the two countries collapsed.

At the same time the Turkey Levant Company was using heavily armed merchant sailing vessels in their trade between Turkey and England.  These vessels were pirates in merchantmen’s clothing as the company had received a letter of marque and reprisal from Queen Elizabeth I.  This letter gave privateers (or private ships of war) the right to attack Spanish vessels and bring them before admiralty courts for condemnation and sale.  Sailing under a letter of marque was considered an honourable calling, combining patriotism and profit, in contrast to unlicensed piracy, which was vilified by all nations. (Mail Online)

Privateers were every bit as bad as pirates when it came to attacking merchantmen and they were just as cruel.  There were some seventy privateers who stole £97,000 under the protection of Elizabeth’s rule. One of the vessels, the Cherabin, accounting for some £2000 of the total plunder.  The proceeds from this infamous practice were divided between the English government, via the admiralty courts who imposed a substantial tax on the value of the spoils, and the wealthy owners of the privateer vessels.   The ships of the Turkey Levant Company preyed on Spanish merchantmen returning from the new world colonies laden with all kinds of precious cargo such as gold and jewels, spices, hides, sugar and rum.

One of the vessels from the Turkey Levant Company anchored in the Thames in 1683 when it was caught in a violent storm, and was finally driven onto a sandbank where it sank fully-laden.  Documents show that the ship was discovered in the 1840s, when men under the command of the Duke of Wellington recovered lead ingots and iron guns from the wreck and melted them down for their scrap value.  The ship continued to lie in its watery grave until workmen dredging the Thames estuary in 2003 once again came across timbers from the wreck.   The wreck was lying around Girdler Sand near Herne Bay in Kent; divers raised the remaining timber skeleton of the wreck, along with a number of artefacts.   Over several years of raising the timbers, ensuring they were properly conserved, and taking samples for further investigation, the historians determined that they had found a 16th century merchant ship that weighed 160 tons, measured 80 feet from stern to bow and 25 feet from port to starboard, and had a 60-foot draught or keel.  The timbers were dated to 1574, which made this vessel the same age as Sir Francis Drake’s Golden Hind.  The vessel was also found to have purposely built gun ports. 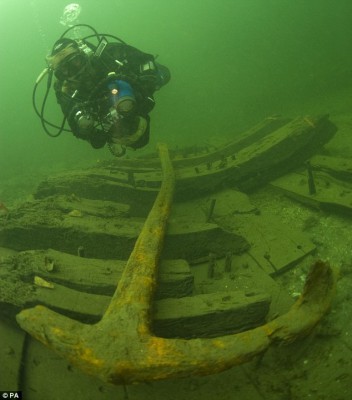 Until all of this information came to the fore, no one knew the name of the wreck that they had found, so it was nicknamed the Gresham Ship after Sir Thomas Gresham.  The guns found on the wreck had his initials cast into them, as he was the armorer that made the seven-foot guns.  Dr. Gustav Milne from the University College London’s Institute of Archaeology led the team that painstakingly dredged up the fragile timbers and mud-covered artefacts.  After ten years of work Dr. Milne stated, “I think there’s a very good chance that the Gresham Ship was actually the Cherabin.  We know the Cherabin was drifting in a peculiar way because it lost its rudder and sails. Interestingly we didn’t find a rudder and our ship was strangely orientated on the sea bed.”

Dr. Milne and his team have stated that they cannot be one hundred percent sure that the wreck they found is the Cherabin as the port records from the year the Cherabin sank are no longer available.  This means there is no official record since its cargo and the skeletal remains that have been recovered are too badly disintegrated to provide absolute proof.  The one link to the Cherabin is from old records that detail a court action brought about by the owners of the vessel against the Port Authority, claiming the estuary channels were improperly marked. 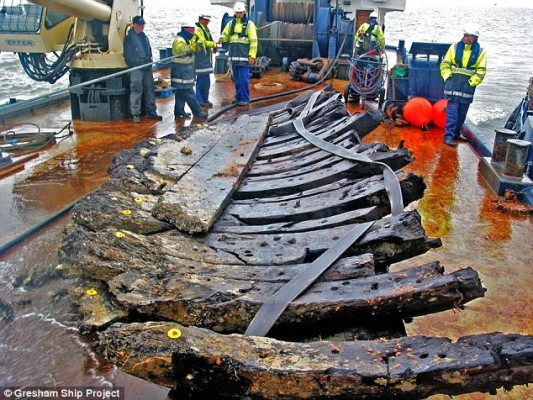 The ship was left in pieces but originally weighed 160 tons and measured 80ft long and 25ft wide. source

The ship’s oak timbers will not survive on dry land, as they start to deteriorate as soon as they are removed from the water.  The timbers have been reassembled, as much as they can be, and are residing underwater at the National Dive Centre in Stoney Cove, Leicestershire, where they form part of the underwater museum.   The artefacts found are being cleaned and preserved and will be on display at the Southend Museum in Essex from 2018.

It is amazing to think that in the latter part of the 1500’s Queen Elizabeth was able to draft merchant ships into her navy and set them against Spanish ships, thus waging a guerrilla war on Spain without actually declaring war.  We are fortunate that the vessel sank in a place that we can recover it and add a little more to our store of knowledge about the life and times of the Elizabethan Age.  The excavation of this wreck will fire the imagination of many a small boy as once again the romance of the high seas is brought to life, and even if this is not a fabled privateer, it is a very important find that ranks up there with the discovery of Mary Rose.

« Beatlemania: The intense fan frenzy directed towards the English rock band
Incredibly Ambitious Project to Save as Much of the Citys Mosaics as Possible »